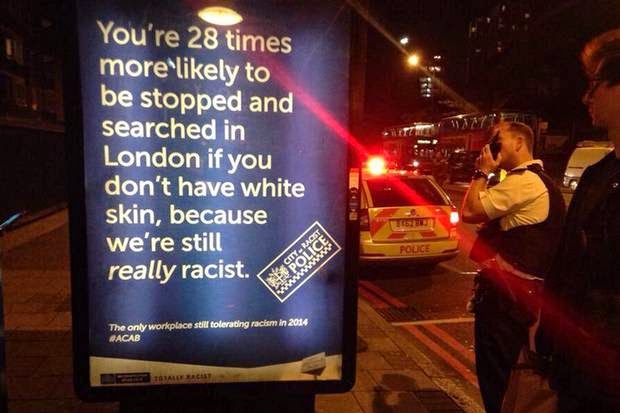 Fake advertisement posters mocking the Metropolitan Police have been plastered all over London, like the one above. Other messages include 'We caused the 2011 riots by shooting dead an unarmed civilian and then lying about it. And we got away with it', referring to the killing of Mark Duggan in Tottenham and another one says 'We've pointlessly targeted cannabis users in Lewisham. while other people legally drink their drugs.'

The posters appear to have been produced by the anarchist magazine Strike. Reports say that police have sealed off the locations where the posters have been displayed with crime tape, so they are obviously somewhat embarrassed by them.

Still, there is nothing untrue about any of the content of these posters that I have seen. May the campaign continue.
Posted by Mike Shaughnessy at 10:30