'A Roadmap To Global Burning': COP20 Closes With Even Weaker Climate Pact 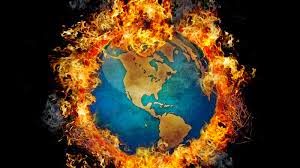 After two weeks of negotiations, the world community has yet again failed to take any meaningful actions to prevent landmark global warming and instead has produced a "roadmap to global burning," leading climate campaigners lamented upon the close of the United Nations COP20 climate talks in Lima, Peru on Sunday.

In the wee hours of the morning, two days past the intended close of the conference, delegates from 195 nations cemented the text intended to serve as the building blocks for the next round of international climate negotiations in Paris next year.

Under the adopted text, named the Lima Call for Climate Action, governments will submit plans for how their country intends to reign in emissions by the "informal" deadline of March 31, 2015.

However, according to RTCC journalist Ed King, reporting from Lima, nations "will not be compelled to offer up front information explaining how their national plans are fair or ambitious, nor will they face any rigorous assessment process ahead of the Paris summit."

"Instead," King notes, "the UN will deliver its own analysis on the 'aggregate effect' of all pledges by November 1, a month before talks in the French capital commence."

Environmentalists warn that these individual pledges, known as Intended Nationally Determined Contributions (INDCs), will likely be too week to limit warming to 2 degrees Celsius above pre-industrial levels, beyond which scientists say increasingly severe heatwaves, rainfall, flooding and rising sea levels will likely occur.

Responding to the deal, Pablo Solon, former Bolivian ambassador and current director of the activist think tank Focus on the Global South, wrote that the COP20 outcome is "unacceptable for the people and Mother Earth and represents a roadmap to global burning in COP21 in Paris."

"We are on a path to three or four degrees with this outcome," Tasneem Essop, international climate strategist for World Wildlife Fund, told the Guardian's Suzanne Goldberg after reviewing the final draft text on Saturday.

"We are really unhappy about the weakening of the text," Essop continued. "This gives us no level of comfort that we will be able to close the emissions gap to get emissions to peak before 2020."

And Saleemul Huq, a senior fellow at the International Institute for Environment and Development, agreed: "It sucks. It is taking us backwards."

The pact, for the first time, also lays out a commitment for all countries to lower their greenhouse gas emissions, despite the fact that developing nations have repeatedly called on richer countries to take the lead in tackling emissions because of their outsized contribution to global warming.

"Once again poorer nations have been bullied by the industrialized world into accepting an outcome which leaves many of their citizens facing the grim prospect of catastrophic climate change," said Friends of the Earth’s International climate campaigner Asad Rehman in a statement on the pact.

"The only thing these talks have achieved is to reduce the chances of a fair and effective agreement to tackle climate change in Paris next year."

"Countries have failed to represent the interests of their people in these negotiations," said Niranjali Amerasinghe, Director of the Climate & Energy Program at the Center for International Environmental Law (CIEL).

Amerasinghe said that the failure of the negotiators to set concrete milestones for emissions levels and specify how developed countries will support mitigation and adaption actions in developing countries leaves the world at great risk. "The decision they adopted is empty and does not come close to the ambition required to deal with the climate crisis. It is unacceptable."

Environmental groups did note one silver lining included in the text, which is a provision that leaves open the possibility of setting a goal of zero net global emissions by 2100, which 350.org communications director Jamie Henn said is a "win for the fossil fuel divestment movement."

However, Henn added that action on that front "must begin now, not after decades of delay."

While government negotiators dithered until 3 AM, civil society and climate justice groups protested outside the conference chanting: "No justice? No deal!"

Written By Lauren McCauley @ CommonDreams.org
Posted by Mike Shaughnessy at 10:42