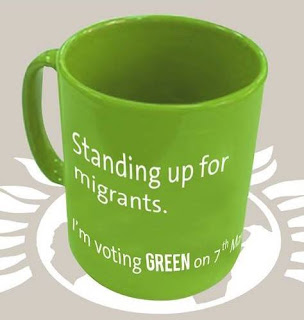 If we assume that there is some truth in this poll, then what might the reasons be for this doubling of support for the Greens, from around 3% or 4%? There could be a number of factors at play here.

The Green Party has a leadership and deputy leadership election on at the moment, but this hasn’t received much attention in the mainstream media, save a little in The Guardian and Independent, which is par for the course. I shouldn’t have thought the internal election has had much impact on Green voters, although the possible return of Caroline Lucas to the leadership (joint), may have had a little.

Most Greens voted to remain in the European Union at the recent referendum, and as we seen with the Lib Dems, the Brexit result has increased membership, so there be a small bounce from this.

The US Green Party has received some media attention on this side of the Atlantic, mainly in Bernie Sanders’ slipstream, but again only in the usual media suspects (as mentioned above). I don’t think it is having much effect on voting intentions in the UK.

This year has been the hottest on record (globally), and weather patterns often give a boost to Green Parties, but this is normally of the obviously adverse type. In the UK that means flooding, which we haven’t had much of recently, so this can probably be discounted too.

Unquestionably, the coup launched by Labour MPs and the Labour Right in general, against Corbyn’s leadership, which has received much media attention, has had a detrimental effect on Labour’s standing. Even if you don’t believe all of the ridiculous claims being made by the plotters, and risible they mainly are, but who would want to vote for a party in the midst of a civil war?

I always knew that the Labour Party establishment wasn’t going to accept the shift to the left that Corbyn’s election as leader represents, and sure enough they are tearing the party in two, but whoever triumphs in this year’s re-run of the leadership election, the split will not be healed anytime soon.

The voters can get similar policies to what Corbyn is advocating, from the Green Party, and without all the unpleasantness that we see from the Labour Party, and from a united party too. Labour is now the 'nasty' party.

What we have seen in Greece and Spain, (although Portugal bucks this tend to some extent), is social movements forming new parties of the left, not taking over the main social democrat parties in their countries, and in time people may conclude that here in the UK that should happen too. The Greens, although not new are certainly untainted, and maybe could become this new left party?


What is going on in the Labour Party presents a massive opportunity for the Greens, and I hope that whoever is elected as leader of the Greens, will fully exploit this opening on the left of UK politics.