Local Government can nudge us towards Ecosocialism 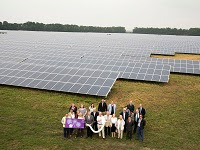 Conservative run Forest Heath District Council in Suffolk has purchased a 12.4MW solar farm at Toggam Farm in Lakenheath, in their area. The farm is 17.5 hectares in size and has over 47,000 solar panels in operation. It becomes the largest publically owned solar farm in the UK and will produce enough electricity to power 3000 homes, plus cut the carbon footprint by the equivalent of 2000 cars.

The farm cost £14.5 million pounds but is expected to deliver £300,000 per year (over and above the cost of repaying the loan used to buy it), in revenue to the council during the first ten years and £700,000 per year thereafter. The revenue, at least at first, will come from selling power into the National Grid.

But the council has some longer term plans for selling the energy generated by the farm. Cllr Stephen Edwards, Forest Heath’s Cabinet Member for Resources and Performance said:

“In the future, the solar farm could provide energy to West Suffolk councils’ offices and our leisure centres, helping us and our partners to save money on energy costs on top of the income it will bring in, while further down the line there may also be opportunities to benefit our communities as well, although this is dependent on the energy market.

“We plan to lobby the Government to relax charges over the generation and supply of energy to local markets. If successful that could allow us to offer our own branded tariffs to local businesses, providing them for the first time with stable energy supply costs, which in turn would help support local economic growth.

“We would also like to be able to offer something similar to the vulnerable members of our community and will continue to explore how we can overcome the barriers in the market, in order to make this a reality.”

Now, this is a Tory council, and the motivation for this initiative is driven by cuts to local authority funding from central government, but it does have the potential to become an outline sketch of a move towards ecosocialist practice.

Ecosocialism, or the strain of ecosocialism that I follow anyway, wants energy generation taken out of the hands of the large corporations with their large scale plants, and instead to be generated by local communities themselves, and shared in that community and perhaps with neighbouring communities. No profit motive involved. Energy supplied for need, not greed, you could say.

This has the benefit of reducing energy loss between remote power stations and the end users, which is a considerable waste of energy in the current set up. Also, it would allow us to push the corporations out of our lives, with their rip off prices and generally polluting forms of power generation.

Having local government take over this role of local generation, is not ideal, but it is better than what we have at present, and can be viewed as delivering similar benefits to community owned generation. It can also be viewed as a stepping stone to a fully ecocentric form of production.

The idea in Suffolk is to feed the electricity generated by the solar farm into the National Grid, which is wasteful and centralising, with the need for transmission from farm to power station and then onward to end users, but you can see from the quote from Cllr Stephen Edwards, they are looking at purely localised generation and use in the longer run.


This is an interesting development, full of potential for radical ecosocialists, and one which we should welcome, and look to build on in other areas of the country.

Posted by Mike Shaughnessy at 10:25