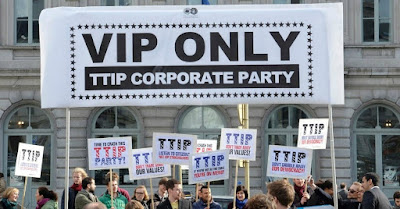 Protesters demonstrate in Brussels against the TTIP earlier this year. (Photo: AFP/Getty)

EU member states and the European Parliament will be "sidelined" in favor of big business and U.S. interests should the TransAtlantic Trade and Investment Partnership (TTIP) go through, according to a leaked document revealed Friday.

The leak, of the corporate-friendly trade deal's draft chapter on "regulatory cooperation" between the EU and U.S., was made public by The Independent and Brussels-based campaign group Corporate Europe Observatory (CEO).

It exposes "a labyrinth of procedures that could tie up any EU proposals that go against U.S. interests," as The Independent put it, as well as "the extent to which major corporations and industry groups will be able to influence the development of regulatory cooperation."


Lengthy procedures, including vetting by business for possible economic impacts, are thus envisaged for new regulations. Such measures have already been used informally to weaken EU ambition on financial sector supervision in the years leading up to the 2008 collapse, to offer a free pass to US companies on personal data protection, and to delay or water down EU proposals on animal testing and aviation emissions.

This leaked document from the negotiations confirms fears that the Commission will be obliged to consult with US authorities before adopting new legislative proposals while EU Member States and the European Parliament are sidelined. The leak also offers a glimpse at the proposed bureaucratic labyrinth of impact assessments, dialogues, consultations and reviews that could tie up any proposals that go against US business interests.

In short, he said, "this document shows how TTIP's regulatory cooperation will facilitate big business influence—and U.S. influence—on lawmaking before a proposal is even presented to parliaments."

Nick Dearden, executive director of Global Justice Now, told The Independent: "The leak absolutely confirms our fears about TTIP. It's all about giving big business more power over a very wide range of laws and regulations."

As such, Haar added, the TTIP represents "a serious threat to democracy as we know it."

The proposed trade deal, being negotiated in secret, faces growing opposition across the European continent.

Just last month, a report from Global Justice Now and the Netherlands-headquartered Transnational Institute showed how the TTIP would undermine national sovereignty by hampering governments' ability to enact effective and fair tax systems to finance vital public services. Also last month, heavily redacted documents obtained by the Guardian revealed that European officials had assured ExxonMobil that the pending U.S.-EU trade agreement would force the removal of regulatory "obstacles" worldwide, thus opening up even more countries to exploitation by the fossil fuel empire.

After the latest round of talks last month, trade officials pledged to accelerate negotiations in the hopes of releasing a full draft text by this summer, and reaching the final stage of talks by October.

However, speaking in Moscow on Friday, former Prime Minister of Italy and former President of the European Commission Romano Prodi said he sees "no prospect" for the deal to be finalized before the U.S. presidential election in November.

"It now appears as if the TTIP arrangements will not be completed before the American presidential election," and adding that this would probably create "a sense of vacuum."

Posted by Mike Shaughnessy at 13:03