We need your support – Open letter by #FridaysForFuture #Rojava 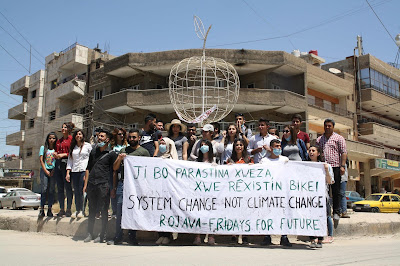 Dear students of Fridays For Future,

We have been following the world wide climate protests and strikes with great excitement. And since we founded Fridays For Future Rojava in May of this year we have been protesting and striking along side you!

Fridays For Future has brought young people together all over the world, united by the understanding that we cannot continue living in a world in which nature is being destroyed!

The reality in Rojava, the Kurdish region of Northern Syria, is very different from the reality in many places, where there are local chapters of FFF. Since 2012, when the revolution in Rojava began, we have been building an alternative model for society – based on the three fundamental principles of women’s liberation, ecology and radical democracy. In the last 7 years, bottom up, self administrated and ecological projects have been created everywhere: neighbourhood councils – women’s centres - educational academies – an alternative, free school system – economic and agricultural cooperatives – and much more besides.

All areas of life have been reorganised from the bottom up. In the past, everything used be governed from Syria’s capital Damascus. Now we govern ourselves. In all these new structures, women organise themselves autonomously so they can form a counterbalance to the power structures of patriarchy.

This democratic system has been a target for reactionary forces from the beginning. First, the Al-Nusra Front (a subsidiary of Al-Qaeda) and then the Islamic State attacked our cities and occupied large parts of the country. But we were able to free ourselves from their cruel regime. The Islamic State has been defeated. But the Islamic State is not a phenomenon that arose only here in the Middle East. Many of the Jihadists came here from Western countries passing through Turkey.

Even with the end of the Islamic State the attacks did not stop. In early 2018, Turkey led an illegal war of aggression and has been occupying Afrin ever since – a region that was under self-administration before and was considered one of the safest areas of Syria. Now, violence rules there again.

Many young people like us helped in defending Afrin. Almost every family can name someone who fell in the defence against the Islamic State and Turkey – someone who was murdered defending peace and democratic values for the world.

On October 9th 2019, Turkey started attacking. Everywhere bombs dropped by airstrikes and shot by artillery rain down on us. The Turkish forces are also attempting to cross the border in some places. Already, there have been many civilian casualties. Infrastructure like damms and the electricity power supply have been among the first targets.

In these trying hours, we turn to you, dear friends of Fridays For Futures. We believe that a solution to the ecological crisis is only possible through self-determination. Our economy has to be structured in a cooperative way and according to the needs of the people. That is what the revolution in Rojava stands for. Stand strong, discuss these topics, don’t let yourself be fooled by the media, hit the streets! As long as these attacks continue, there will be actions of solidarity and resistance. The campaign #Riseup4Rojava will tie all these actions together.

If you want to contact us directly, write us at makerojavagreenagain@riseup.net! We are a diverse group of people from the region as well as people who have come to Rojava to support the revolution – so you can write us in English or any other language!

Posted by Mike Shaughnessy at 09:41