UK Anti-Fracking Green Mondays: Going,… but not yet gone 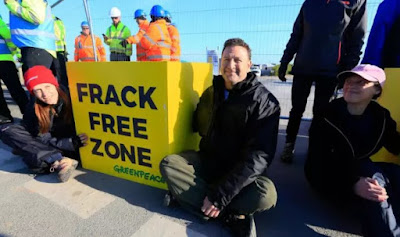 Monday 21 October was a special day at Preston New Road, Lancashire, England, for two reasons: it was our 101st Green Monday - and it was also our last Green Monday of 2019.

The weather was perfect - dry with sunny intervals - and we had a day crammed full of ‘goodies’! Those ‘goodies’ included our speaker, Martin Porter of Manchester Greenpeace, and an excellent array of performers: the Brigantii Border Frack-Free Morris Dancers, the Nanas’ Samba Band, and the brilliant folk group, Mobius Loop: 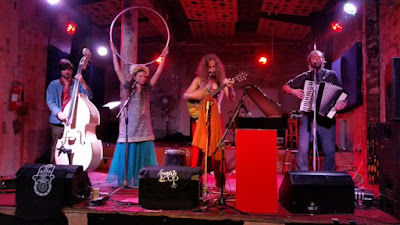 For those unfamiliar with them, here are some links:

In addition, there was plenty of vegan food, including Greggs’ vegan ‘sausage’ rolls and their accidentally-vegan Belgian buns - along with 2 magnums of Booths’ vegan prosecco! So, all in all, we all had a really lovely time - as you’ll be able to see via these links:

However, to be absolutely clear - this decision to pause Green Mondays is NOT because we are giving up and going away! We’ve decided to have a pause as, since August - when Cuadrilla’s most recent attempt at fracking triggered an earth ‘tremor’ that registered 2.9 on the Richter Scale - fracking has been suspended at the Preston New Road site. In addition, Cuadrilla’s current licence expires at the end of November, so it’s unlikely that there’ll be any further fracking attempts until the New Year.

By pausing, we’ll be giving our anti-fracking activists a bit of a rest, after over 2 years of turning up for Green Mondays. It’ll also give a rest to our fantastic Green Monday speakers, who have given so much of their time and energies to the anti-fracking campaign.

Since we first began, on 14 August 2017, a list of those speakers reads like a list of ‘The Great & the Good’! They include: Caroline Lucas, George Monbiot, Jem Bendell, Marina Prentoulis, Mike Berners-Lee, Amelia Womack, Romayne Phoenix, Asad Rehman, Clara Paillard, and the brilliant Kate Raworth (of Doughnut Economics fame): 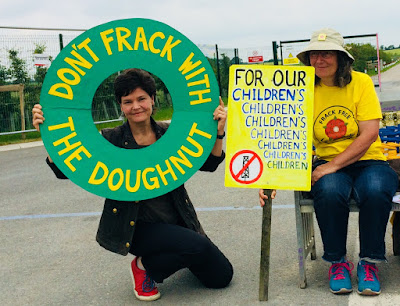 As well as many other national Green Party speakers, we’ve also had a variety of speakers from Greenpeace and Friends of the Earth: from the very beginning, Green Mondays were ‘green’ in the very broadest sense. Consequently, we’ve had speakers from Global Justice Now!, Another Europe Is Possible, Stop The War Coalition, Unite Against Fascism, CND, Left Unity and the Labour Party.

Because, in the end, as our struggle against fracking has developed, it has become clear that those responsible for driving us towards a catastrophic Climate Breakdown are the same people and corporations that are responsible for so many of the other injustices that so many people are facing. Green Mondays have thus been, in some broad ways, an example of intersectionality in action.

The campaign so far

To date, Green Mondays - and all the other days of protest and resistance at Preston New Road - have had to cope with a lot: apart from many wet, windy & cold days, there has often been a heavy police presence: Lancashire Police turn out in force to ‘protect’ one of Preston New Road’s many truck surfers!

which, at times - especially during the period when Lancashire Police received ‘Mutual Support’ from other police forces - was, to say the least, less than professional in dealing with peaceful protesters.

Despite these negative aspects, we’ve also seen some brilliant examples of peaceful civil disobedience and no-violent direct action. In addition to lock-ons and the very effective fracking ‘sport’ of truck surfing, there have also been plenty of mass sit-downs or blocks in front of the gates to Cuadrilla’s fracking site: 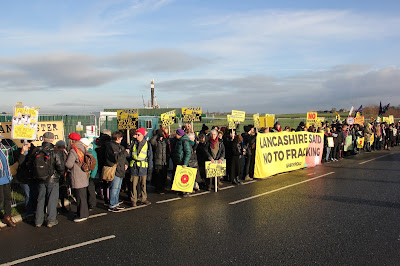 One of the mass ‘blockings’ at Preston New Road

At the moment, Cuadrilla’s plans are in limbo - so lots of fracking equipment (mostly rented) has been removed from the site. But it’s important to know that the site has by no means been abandoned. Consequently, I’m very ‘Brexit’ about where things currently are at: 48% optimistic that fracking here (and elsewhere) is on its last legs; but 52% pessimistic that Cuadrilla will be planning to come back.

They - and the other fracking companies - are clearly hoping for the next general election to be won by Johnson and his hard-right cabal of Tories. If that happens, Cuadrilla will get their application to have their licence extended approved - and such a Tory government will undoubtedly also weaken the current ‘traffic light’ restrictions on earth ‘tremors’.

However, Cuadrilla’s hopes would be dashed if a Labour government - headed by Jeremy Corbyn - were to win the next general election. In July this year, Jeremy Corbyn visited anti-fracking protesters at Preston New Road and confirmed Labour’s commitment to ban fracking: 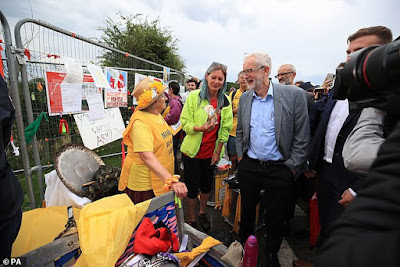 Jeremy Corbyn, talking to some of the anti-fracking activists at Preston New Road, 30 July 2019

Thus this general election will be crucial for the fight against fracking - as it will be for the struggles against austerity and poverty, the privatisation of our NHS, and the rise of the far right. Given the recent decision of the LibDems to abstain on a vote designed to keep our NHS ‘off the table’ in any future post-Brexit trade talks with the US, it is clear that only two parties can be truly trusted to ban fracking: the Green Party and the Labour Party.

Which is why I hope that, in all the key marginal seats that Labour either need to hold or to win to form the next government, local Green parties will stand aside - and encourage all their members and supporters in such seats to vote Labour.


Allan Todd is a member of Allerdale & Copeland Green Party, an anti-fracking activist and a Green Left supporter
Posted by Mike Shaughnessy at 08:11