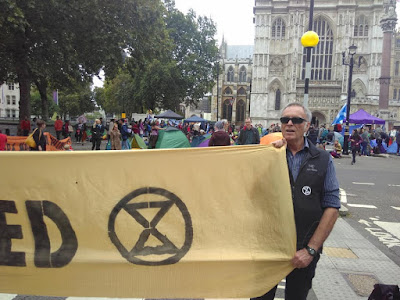 “The health of ecosystems on which we and all other species depend is deteriorating more rapidly than ever…We are eroding the very foundations of economies, livelihoods, food security, health and quality of life worldwide. We have lost time. We must act now.”

Johnson - I absolutely refuse to refer to a dangerous political opportunist, who’s deliberately made racist, sexist and homophobic comments in order to further his career, by his first name! - accused October’s Extinction Rebellion activists of being “unco-operative crusties.”

I leave it up to those who know me to judge whether or not I’m particularly ‘crusty’(!) - but I proudly embrace and own the term ‘unco-operative’! I, for one, certainly have absolutely no intention of co-operating in the government’s persistent refusal to take the climate actions needed to keep UK citizens safe from the growing impacts of Climate Breakdown.

Which is why I - along with Jack Lenox (Green Party PPC for Copeland) and around 70 other Cumbrians from various Extinction Rebellion groups from Carlisle, Penrith and Kendal - was down in London for the start of XR’s fortnight of action this October.

Our task - along with a large number of Extinction Rebellion groups from Scotland and the North East - was to help take and then hold Site 6 in Westminster on Monday 7 October - ideally, for the whole 2 weeks. This site had been designated as Power In Truth: 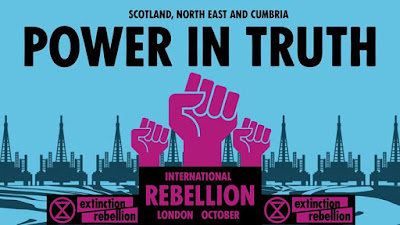 I was particularly pleased to have the honour of taking - quite literally! - the first steps in securing our particular section of that XR site.

Although, sadly, our site - like most of the other sites - was ‘cleared’ by the police by the end of the first week, that ‘unco-operative’ streak is why I also went back down for the start of the second week of the XR action in London, on 14 October.

I know not everyone approves of an elected councillor taking part in peaceful civil disobedience - up to and including the point of arrest. To those who are unhappy with my actions, I have only this to say:

“I’m ‘unco-operative’ because I simply refuse to co-operate - by standing on the sidelines - in this government’s criminal inaction over the looming Climate Crisis.”

If anyone thinks that’s an exaggerated or unfair description of the UK government’s ‘action’ on reducing carbon emissions, I suggest they acquaint themselves with the most recent Report by the government’s own Committee on Climate Change, published this July. This is chaired by Lord Deben - a Tory member of the House of Lords, and formerly the Tory MP John Gummer.

In that Report, he pointed out that the UK government had only met 1 of the 25 ‘targets’ it had set itself for reducing greenhouse gas emissions. In fact, he went so far as to say this about the government’s ‘plans’ to tackle the Climate Crisis:

"The whole thing is really run by the government like a Dad's Army. We can't go on with this ramshackle system."

For an excellent overview on just how serious a crisis we are facing, check out the first part of the 10 October edition of BBC Question Time, in which Rupert Read - a leading Green Party member and Extinction Rebellion spokesperson - set out the situation in very clear but stark terms:

Times are definitely changing when the first question, which occupied almost half the show, was about the Climate Crisis and the radical ecological movement that has mushroomed since Extinction Rebellion was first launched at the end of October 2018.

For further confirmation of why the government needs to be pushed to take urgent and serious action on the Climate Crisis, here is a link to what the renowned campaigning journalist and environmental activist, George Monbiot, had to say in Trafalgar Square, at the start of this month’s Extinction Rebellion:

To disrupt or not to disrupt

Some people ask whether the disruption caused by Extinction Rebellion’s actions is justified. I’m fully aware of how inconvenient being caught in a traffic jam is - especially if there’s somewhere you urgently need to be.

But the impacts of global warming have already caused much greater disruption to the lives of thousands of people - including in Cumbria where, since 2005, we have had three ‘once-in-a-lifetime’ floods: 2005, 2009 and 2015.

Whilst I have been fortunate enough to escape (so far), I saw the huge impact flooding has on people when our younger daughter and family were flooded in Corbridge, as a result of Storm Desmond, in December 2015.

We all know now that the current level of global warming has already increased the average temperature of our oceans - and that this is resulting in more, and more serious, extreme weather events.

Even in economically-developed countries, these extreme weather events have already claimed several lives. Whilst, in the Global South, the number of deaths is in the thousands.

Yet this Tory government - like the Tory/LibDem coalition of 2010-15 before it - is still promoting fracking: one of the most extreme fossil fuel industries. At the same time, it is cutting subsidies to clean renewable energy projects, whilst continuing to give massive amounts of taxpayers’ money to the dirty energy companies.

Many environmental campaigners are not surprised by this state of affairs - as several reports over the past few years have repeatedly pointed out that many government ministers have links (present and/or past) to the finance and/or dirty energy companies which are continuing to drive global warming. This is sometimes referred to as the ‘finance-energy complex’:

The existence of such a ‘fossil fuel web of power’ may help explain why governments since 2010 have done so little to move our economy to clean energy. If dirty energy giants such as BP, Shell and Texaco - and the dirty banks that finance their destructive (but profitable) Climate Crimes - are able to exert such influence over our democracy, it is no wonder that ordinary citizens are increasingly forced to take to the streets to disrupt these companies’ ‘business as usual’:

Approaching the ‘Cliff of Climate Breakdown’

Last year, the UN’s Intergovernmental Panel on Climate Change (IPCC) warned that we had only 12 years in which to make MASSIVE cuts in greenhouse emissions if we wish to avoid uncontrollable Climate Breakdown. David Attenborough has warned that humanity is facing its greatest threat in thousands of years as a result of human-driven climate change:

“If we don’t take action, the collapse of our civilisations, and the extinction of much of the natural world on which we depend, is on the horizon.”

Recent studies show the 20 warmest years on record have been in the past 22 years and the top 4 in the past 4 years - & each one breaking the previous record. Scientist are now broadly agreed that climate action must be increased five-fold to limit global warming to 1.5C & pointed out at COP24 that:

“We are the last generation that can stop climate change.” 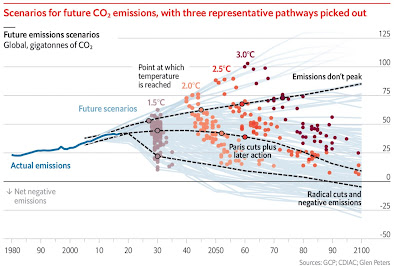 It’s worth remembering that the figures that have come out of the various IPCC Reports since 1988 - when the IPCC was first set up - are the result of compromises, which has meant that their projections have always been notoriously - and often dangerously - conservative and thus have often underestimated the risks we are facing.

In particular, oceans are now warming 40% faster than the UN predicted just 5 years ago. As a consequence, on every single continent, climate disruption - on a planetary scale - is no longer a future threat, but a lived reality. In almost every aspect associated with global warming, things are unravelling significantly faster than most scientific models had originally predicted.

In April this year, a far-ranging study on the impacts of global warming on the Arctic concluded that ice is now melting so rapidly that:

In April this year, a far-ranging study on the impacts of global warming on the Arctic concluded that ice is now melting so rapidly that:

“the Arctic biophysical system is now clearly trending away from its 20th. Century state and into an unprecedented state, with implications not only within but also beyond the Arctic.”

In May, a UN Report revealed the startling loss of wildlife around the world, showing that a million species of animals and plants are at risk of extinction:

“The health of ecosystems on which we and all other species depend is deteriorating more rapidly than ever…We are eroding the very foundations of economies, livelihoods, food security, health and quality of life worldwide. We have lost time. We must act now.”

What next for Extinction Rebellion?

So far, Extinction Rebellion has focussed its protests on the government, in an attempt to force it to start taking serious actions to drastically reduce carbon emissions. As stated above, one very significant explanation of the government’s increasingly criminal inaction is the massive influence wielded by the dirty energy companies, and the dirty banks that finance them.

So, as well as continuing to disrupt government departments, I think the time has now come for us to target our protests in a more specific way, to also disrupt the ‘business as usual’ of the dirty energy companies, and the dirty banks that continue to facilitate their Climate Crimes: 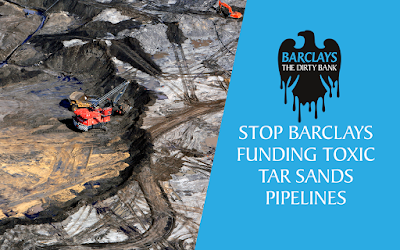 Even if people are not prepared to take non-violent direct action, there are numerous non-arrestable roles that people can do, to help support those who are prepared, if necessary, to be arrested. At the very least, there are things individuals can do at home:

1. If you haven’t already done so, switch to an energy supplier that is based entirely on clean, renewable energy, such as: Ecotricity or Good Energy

2. In the same way, switch to a bank that doesn’t fund/facilitate the dirty energy projects that are driving the world ever closer to Climate Breakdown. These more ethical banks include: The Cumberland Building Society and The Co-operative Bank. If you’re currently with Barclays or HSBC, please make sure that, when you do switch, you email their respective CEOs to tell them why you’ve switched - and that you’ll be encouraging all your family and friends to do likewise:

Lists of clean energy suppliers and ethical banks can be found in ‘The Ethical Consumer’ magazine: https://www.ethicalconsumer.org/

Despite the police having cleared all XR sites - 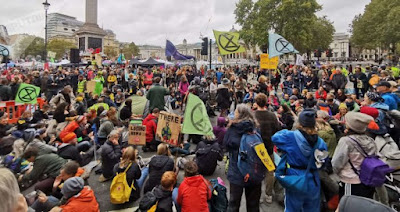 XR activists continued blocking actions into the second week - including, on Monday 14 October, the area around Threadneedle Street and Lombard Street, in front of the Bank of England, which was successfully blocked until just after 5.00pm. Even the blanket ban on all XR protests, issued by the Met Police the following day, did not - despite random stopping and searching - stop the protests.

The message is clear: we will continue to ‘Rebel For Life’ until the government stops putting the narrow financial interests of the dirty energy companies and the dirty banks first and, instead, takes serious action to protect our planet: 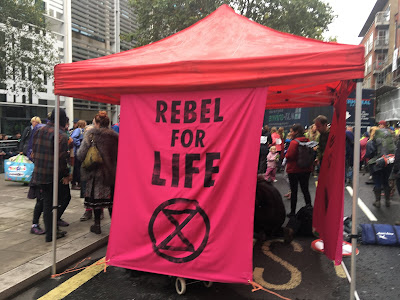 Allan Todd is a member of Allerdale & Copeland Green Party, an XR activist and a Green Left supporter
Posted by Mike Shaughnessy at 04:27