What does “climate emergency” mean? Let’s define that OUTSIDE Parliament 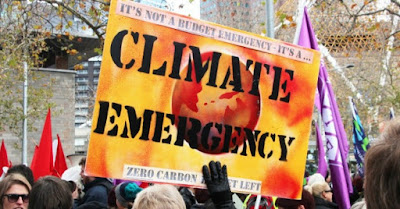 Written by Gabriel Levy and first published at People and Nature

Strikes by school pupils, and civil disobedience by Extinction Rebellion, pushed the UK’s House of Commons into declaring a “climate emergency” on Wednesday. The government is so weak and divided that – having said one week ago that it would not make such a declaration – it caved in and lined up behind a motion put by the Labour leader Jeremy Corbyn.

The Tories’ weakness really is part of this. The Prime Minister, Theresa May, lost the ability to tell her MPs how to vote on anything, during repeated breakdowns of their traditional discipline over Brexit. And the “climate emergency” vote took place on the day that she fired her defence secretary Gavin Williamson for breaching security.

And the movements outside parliament made the difference. The Labour MP Faisal Rashid pointed out during the debate: “We are not here because of an international effort co-ordinated by world leaders. […] We are here because a small group of schoolchildren decided to walk out of school to take a stand against climate change, and they have inspired a global movement.” It is “an indictment of our global political leadership”, he argued.

Another reason the “climate emergency” motion passed is that it committed neither the government nor Parliament to do a single thing. It could be, and was, supported by many total hypocrites as a way of co-opting and defusing people’s anger.

Anyone who thinks that Parliament actually meant what it said, when it voted for Corbyn’s motion, should bear in mind that:

■ Parliament believes it can declare a “climate emergency” while supporting a third runway at Heathrow Airport. That will help ensure a global expansion of aviation, which is completely incompatible with averting dangerous climate change. Yesterday, parliament took a written statement from Chris Grayling, transport secretary, welcoming the High Court’s rejection of five legal challenges to the third runway. Green MP Caroline Lucas asked environment secretary Michael Gove about Heathrow during the “climate emergency” debate, and he sidestepped the question. When parliament voted in June last year to support the third runway at Heathrow, 115 Labour MPs voted with the Tories in favour of it.

■ While the Labour leadership moved the “climate emergency” motion – and good for them – a Labour-led council Cumbria in March approved the UK’s first new deep coal mine in decades, and Labour councils in London continue to support the Silvertown Tunnel and other car-focused infrastructure while public transport is cut.

■ Tory MPs in parliament – and some Labour ones too – see no contradiction between a “climate emergency” and government policies that support fracking for gas; boost subsidies to fossil fuel production (especially, tax breaks for oil companies working on the North Sea); and trash measures to support solar power, onshore wind and zero-carbon homes.

■ Greg Clark, the business secretary, wound up the debate in parliament by claiming capitalist economic expansion was the best way to deal with climate change. “Enterprise [he meant, private enterprise by capitalists] has been the greatest rebellion against extinction in the history of the world”, he said. The big lie of our time.

It’s not only that these politicians are hypocritical and treacherous in their claims to be dealing with climate change.

It’s that the solutions they propose range from measures carefully crafted not to damage the capitalist economy (e.g. opening electricity markets to renewables, but only in a way that helps big corporations keep control); to those that try to inflict austerity on working people in the name of “climate emergency” (e.g. the French government’s diesel tax that triggered the “yellow vests” revolt); to actively destructive policies such as geo-engineering (which was mentioned by Michael Gove when he met an Extinction Rebellion delegation last week).

To the extent that the far right gains traction in government and parliamentary politics, the “emergency” could also be used to justify anti-migrant policies and austerity measures even harsher than were planned in France.

This parliamentary decision tells us that the public space for discussion of climate change is shifting. In my view this means that, outside Parliament – in climate campaign organisations, in the labour movement, in social movements, in communities – we have to develop real discussion about the measures we think need to be taken in the light of this climate emergency.

We need to work out how the fight to avert dangerous climate change, and the struggle for social justice, can be combined. Nixing the third runway at Heathrow and the Silvertown Tunnel, ending fossil fuel subsidies, vanquishing fracking – these will be a good start. But only a start.

We need to envision a transition away from fossil fuel consumption (the main cause of global warming) that involves the transformation not just of some parts of the economy, as some people claim, but of the whole economy and of society. The corporations that develop the fossil-fuel-intensive industries, and the relationships of wealth and power with which these industries are tied up, will need to be confronted and defeated.

Parliament’s decision is a double-edged sword.

On one hand it’s a weapon in the hands of each and every campaign on climate change in the UK. It makes it all the more difficult for politicians and trade union leaders to defend their indefensible decisions to support fossil fuel companies and fossil-fuel-intensive infrastructure projects.

On the other, it’s a reflection of a huge political effort to co-opt, neutralise, patronise and smother the growing movement against politicians’ inaction on climate change. The cynicism and sophistication of these efforts should not be underestimated: they have been going on globally ever since the Rio agreement on climate change was adopted in 1991.

And meanwhile, fossil fuel use has risen by about 60%.

We need to define, outside parliament, what this emergency means, and how it is going to be tackled.
Posted by Mike Shaughnessy at 10:28