The ReCommonsEurope Manifesto: A Left-Wing Initiative in Europe 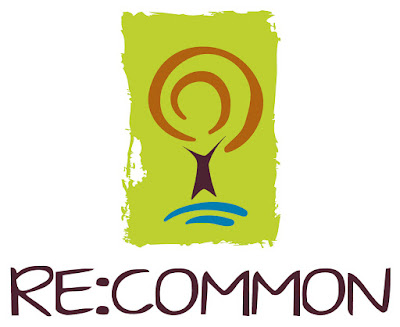 Written by Eric Toussaint and first published at CADTM


While the campaign for the European elections on 26 May (on the 23 May in the UK) draws very little interest outside of the UK, the initiative launched by ReCommonsEurope with its ‘Manifesto for a new popular internationalism in Europe’ is on to a promising start.

They represent three generations. The Manifesto is supported by over 160 signatories from 21 different European countries, among whom a majority of women. Signatures are still being collected.

Highlights of the ReCommonsEurope initiative

ReCommonsEurope resulted from the wish to collaborate between two European networks, namely the CADTM and EReNSEP, and the main trade union in the Basque country, ELA (see this). The two European networks had been directly involved in the Greek experiment in 2015 and had drawn converging lessons from it.

For over fifteen years ELA and the CADTM have been recurrently involved in various internationalist initiatives, from the World Social Forum launched in 2001 to the Altersummit, including the European Social Forum. ELA, CADTM and EReNSEP activists have also been directly involved in the struggles that are fought in their respective countries. Since 2015 they have taken an active part in meetings and debates about Plan B.

The text of the Manifesto was drafted over the three meetings held in 2018, and collectively finalized in 2019. It is a continuation of the call entitled Ten Proposals to Beat the European Union, a collective text introduced by over 70 signatories in February 2017.

The objective aimed at by ReCommonsEurope is both limited and ambitious: we want to prove that it is both possible and necessary for radical measures to be implemented in Europe.

The Manifesto results from this observation: a large majority of left-wing political organizations and social movements are afraid of coming forward with truly anti-capitalist, anti-patriarchal, anti-racist and eco-socialist measures. Some are even openly, not to say cynically, social-liberal, which excludes them from any claim to being on the left.

The 2015 Greek experiment has often been used as a scarecrow. It is supposed to provide evidence that a radical programme cannot be implemented. Yet members of ReCommonsEurope read a different message in the Greek experiment – and fortunately they are not alone. For them the Tsipras government had given up from the start on achieving the radical commitments they had pledged to the Greek people, and this resulted in the disaster of the third Memorandum of Understanding.

ReCommonsEurope asserts the need to implement a radical programme and to rely on a strategy that consists of mobilization, civic disobedience and popular self-organization.

The people who wrote the Manifesto have diverging views on some issues: should we leave the Eurozone or not? Is it possible and useful to create a complementary currency? Should all the banking and insurance sector be expropriated to be turned into a public service or should we create a public pool in competition with capitalist private banks? 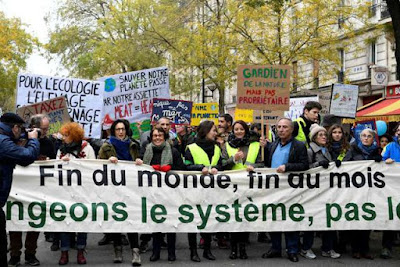 ReCommonsEurope invites the confrontation of diverging view and debates on what measures ought to be taken. This Manifesto is not some absolute declaration of faith; rather it is an invitation to more debate.

Activists that contribute to ReCommonsEurope are well aware that putting a programme forward, however good it might be, is not enough. Clearly the decisive element will be the struggles to thoroughly change power relationships and make the implementation of a coherent set of economic, political, social and cultural measures possible. But those who meet in the context of ReCommonsEurope are convinced that for the struggles to result in major changes, it is essential to have a clear view of a set of measures to be taken by a popular government.

The climate crisis, violent austerity policies and the danger represented by a racist and xenophobic far right, only make it more urgent to define a strategy associating popular self-organization with social movements and political organizations, in order to make politics serve the interests of the majority.

For the last ten years many popular mobilizations have questioned the establishment. The Manifesto is part of those movements and highlights the struggle against exploitation and all forms of oppression.

As noted in the introduction to the Manifesto, struggles over the past ten years cannot be dissociated from social, environmental, democratic, feminist and solidarity emergencies.

A social emergency because the living and working conditions of the popular classes have continuously deteriorated in the last thirty years, most notably since the crisis which affected the continent in 2008-2009.

An ecological emergency because the exponential consumption of fossil fuels, and more generally the destruction of ecosystems, which are part and parcel of the capitalist system, have resulted in a global climate change that is ever closer to the point of no return and threatens the very existence of humanity.

A democratic emergency because, faced with the challenges to the dominant classes over the last thirty years, the latter have not hesitated to adopt methods of domination which ignore democratic appearances to an ever greater degree, and are increasingly repressive.

A feminist emergency because patriarchal oppression in all its forms is increasingly being massively and loudly rejected by millions of women and men.

A solidarity emergency because the closing of borders and the building of walls as a response to the millions of migrants fleeing war, poverty, environmental disasters and authoritarian regimes world-wide constitute nothing less than a denial of humanity.

Each of these emergencies leads, in turn, to mass civil disobedience, self-organization and the building of alternatives, which represent possible sources of democratic alternatives in Europe.

Not only is the European Union one of the world’s vanguards of neo-liberalism and imperialism, it is also a set of institutions serving big capital. Therefore a left committed to social transformation can no longer be credible and realistic without placing a complete break with the treaties and institutions of the European Union at the heart of its strategy.

By making these proposals for disobeying and breaking with the European institutions, there can be no question of looking towards a nationalist solution to the crisis and social revolt. Just as much as in the past, we need to adopt an internationalist strategy and advocate a European federation of peoples as opposed to pursuing the present course of integration which is completely dominated by the interests of big capital.

It is also a question of constantly seeking to develop coordinated campaigns and actions at the continental level and beyond, in the fields of debt, ecology, the right to housing, treatment of migrants and refugees, health, education and other public services, the right to work, the fight to close nuclear power plants, the drastic reduction of the use of fossil fuels, the fight against tax dumping and tax havens, the fight to socialize the banks, insurance companies and the energy sector, the re-appropriation of the commons, action against the ever-increasing authoritarianism of governments and for democracy in every area of social life, the struggle to defend and extend the rights of women and LGBTI people, the promotion of public goods and services, the creation of constituent processes. 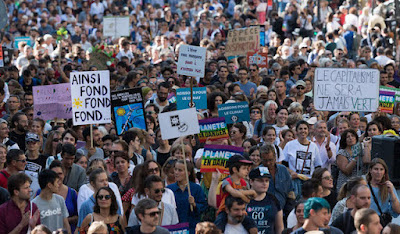 A collective work to be carried on

Members of ReCommonsEurope met in Brussels on 21 and 22 March 2019. Participants came from Belgium, Bosnia, Cyprus, Croatia, Denmark, France, Germany, Greece, Italy, Serbia, Spain and the UK. They discussed the current final version of the Manifesto and the initiatives to be taken to make it known throughout Europe. It is currently available in French, English, Spanish and Catalan. It is still open to signatures.

This latest meeting on 21 and 22 March 2019 was the fourth meeting of ReCommonsEurope members. The first two took place in Brussels, in February and June 2018 respectively. The third was held in London in September 2018. During these meetings, drafting groups were set up by theme and produced the Manifesto for a New Popular Internationalism in Europe between the end of 2018 and March 2019; the Manifesto was made public in three languages on 21 March 2019.

During the meeting on 21 and 22 March, ReCommonsEurope members agreed that the document could be improved upon, that the work had to be continued. We also noted the need for a shorter more accessible version. Two processes are thus currently taking place: work to improve the Manifesto, which is about 100 pages long, and the drafting of a condensed version that should not be more than 20 pages long.

It is crucial to notice that debates on a programme of measures to be taken have not yet been through enough. Several issues deserve more accurate definition: the possibility and the role of a complementary currency, how a number of countries could leave the euro, practical measures to be taken regarding banks, immediate measures required to contribute to fighting the environmental crisis, etc.

Why the work carried out by ReCommonsEurope is significant and useful

Events that followed the 2015 Greek disaster have shown that the popular Left must urgently discuss and carry out coherent proposals to provide a left-wing exit to the current crises. Brexit has been largely dominated by fighting between various factions of big capital in the UK, the popular classes have not been able to define their objectives and their own answer to the question about leaving the European Union. In the case of the Catalan people’s struggle for independence, the Catalan ‘independentist’ right largely ran the process.

The Catalan internationalist and independentist left did not manage to step in with sufficient autonomy. As a consequence the fight for social rights and the contradiction between Capital and Labour were marginalized. In Italy too, the tune is called by the right-wing reactionary forces that are dominant in the current government. More generally, as the crisis within the EU deepens, it is essential that people on the popular side should be in a position to make themselves heard.

ReCommonsEurope has tried, however limited our forces, to convincingly show that we have to step out of the national context in which a large part of the popular side have remained confined. Obviously, stepping out of the national context does not mean that we should not be involved in local social and political struggles but that we should relate them to an international dimension, both in word and deed.

We must also shake the large trade unions out of their passivity. The European Trade Union Confederation, which has tens of millions of members, has proved itself unable to stand up for social conquest against the attacks of big capital supported by EU institutions.

The current struggles waged by women (notably on 8 March) and by young people (with their various mobilizations for the climate) show us which way to go. In several European countries, those mobilizations manage to articulate forms of self-organization, self-coaching, public initiatives and a quest for concrete solutions on a global scale. While the present appeal is functionally directed at militants and activists of the European left, its spirit is undoubtedly universal.

It is urgent that all anti-capitalist, eco-socialist, feminist, anti-racist activists should discuss these solutions and call upon social and political organizations saying: let’s meet current challenges together and develop a new popular internationalism in Europe and beyond.

Eric Toussaint is a historian and political scientist who completed his Ph.D. at the universities of Paris VIII and Liège, is the spokesperson of the CADTM International, and sits on the Scientific Council of ATTAC France. He is the author of Bankocracy (2015); The Life and Crimes of an Exemplary Man (2014); Glance in the Rear View Mirror. Neoliberal Ideology From its Origins to the Present, Haymarket books, Chicago, 2012 (see here), etc.

Posted by Mike Shaughnessy at 09:55