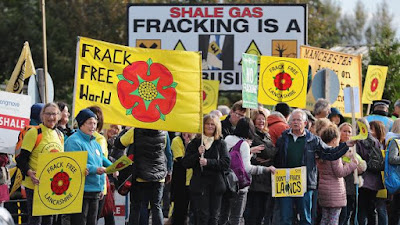 As promised, Reclaim the Power’s ‘BLOCK AROUND THE CLOCK’ - for the last week of June's United Resistance at Preston New Road (PNR) in Lancashire, England - was certainly a lively & colourful response to Cuadrilla’s High Court injunction!

Hundreds of ‘Conscientious Climate Protectors’ - from organisations such as 350.org, RtP, Divest Parliament and the Lancashire Nanas, as well as individuals concerned about global warming and climate breakdown - mounted a 48-hour blockade of Cuadrilla’s fracking site.

As well as mass gatherings right in front of the gates:

there has been an ever-changing variety of ‘happenings’ - including dancing, music and singing. So it seems that Cuadrilla’s aim to be the first to carry out a frack at Preston New Road has failed: instead, the first ’frack’ has been of their injunction!

Update on the injunction

For those who haven’t been up to Preston New Road since the injunction was granted, because of concerns that you might breach it unwittingly, all you need to know is this:

As long as you make no attempt to prevent/slow/impede the entrance/exit of vehicles (i.e. sit-downs/lock-ons/truck surfs), you are NOT breaking the injunction by simply being there.

We sought legal advice, which has confirmed that it is perfectly ok to stand in front of the gates/on the central reservation/on the other side of the road, with placards, waving to all the drivers who 'honk' their support.

In fact, Green Monday on 25 June was an excellent start to the last week of United Resistance - George Monbiot’s visit saw over 100 Conscientious Climate Protectors turn up to hear what proved to be a really motivational & encouraging speech: 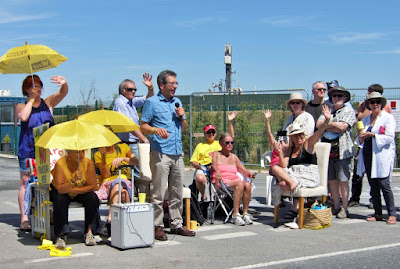 This turn out was the biggest since Caroline Lucas’s visit in September last year. For those of you who were unable to come, here is a link to his talk:

In addition, the 30 copies of his book Out Of The Wreckage sold out extremely quickly - leaving many would-be purchasers disappointed. After the book signing, despite being tired as a result of an operation only the Monday before his visit, he then spent at hour at The Community Hub at Maple Farm Nursery [PR4 3PE], talking to key individuals and inspecting the various facilities (the portaloos excepted!).

30 July - For this Green Monday, our main speaker will be
Siân Berry: 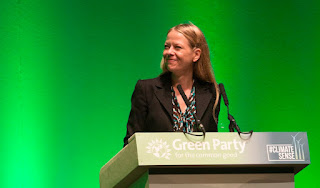 She has been to PNR before, and is currently a Green Party councillor in the London Borough of Camden and a London Assembly Member. She is one of the Co-Leadership candidates in the current Green Party leadership election.

NB - Siân may have to come earlier, on 23 July - but, on whichever Green Monday she comes, she will be holding an Any Questions session for Green Party members at the Community Hub after she's spoken, so that they can ask her about her policies and priorities.

Plus we are currently re-arranging Jamie Bartlett’s postponed visit.

So, over the coming summer weeks, PLEASE turn up whenever you can. You can always camp at The Hub for free, and combine your trip with a day or two in Blackpool, which is only 5 miles west of the site. Blackpool even has one fully-vegan restaurant: Faringo’s, located in The King’s Hotel [FY4 1NF], as well as a few others that have some vegan options.

More information about fracking in Lancashire can be found at: http://frackfreelancashire.org/

The bigger the numbers that turn up, the more Cuadrilla - and the Tories - will get the message that:

We are NOT going to go away UNTIL THEY DO!!