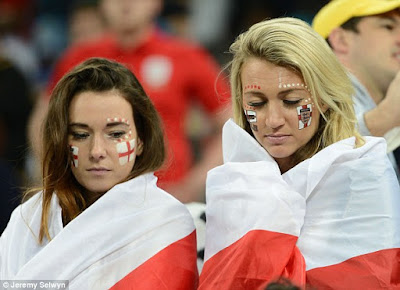 “It’s not the despair, I can take the despair. It’s the hope I can’t stand.” So says John Cleese in the film Clockwise. This quote rather sums up the attitude of England football fans as each World Cup and European Championship comes around. The 2018 World Cup in Russia began yesterday, and England fans and pundits are in familiar territory.

I did think after the team’s last humiliation, knocked out of the European Championships, two years ago, by Iceland (with a population similar to a London Borough), that some realism had been forced on the long suffering followers of the England team. And I did detect low expectations among friends and work colleagues, but all that changed about a week or so ago.

It first surfaced in the English sports media where pundits were lining up talk up England’s chances. The predictions have got steadily more optimistic culminating in the Evening Standard this week, where eight out of ten ex-football players and journalists forecast England will reach the semi finals in Russia. The other two went for a slightly more modest quarter finals exit.

Then I heard a pundit (I didn’t catch who it was) on BBC Radio 5 Live, say that the final was not out of reach for England. He conceded that England wouldn’t beat Brazil, but said they could beat Germany. I laughed out loud.

Germany, the current world champions, consistently do well at football tournaments, usually getting at least as far as the semi finals. England last reached a semi final of the World Cup in 1990, and has actually only got into one final, which they won with a bit of luck, in 1966, on home soil.

Of course things might be different this year, but the omens are not good. England do have some talented young players, but do not look anywhere near as good as the 1966 and 1990 teams, which had some very good players in their ranks. But even this is said to be an advantage to the current side. “They haven’t failed before, so they will be fearless” goes the theory, as though inexperience is some kind of asset.

England start the campaign on Monday with a match against Tunisia, in what looks like an easy group to qualify from for the second round, then it will probably get to be tough going. Pointing out this reality though draws accusations of being unpatriotic, and looks awfully like the magical thinking in many quarters surrounding the Brexit negotiations. Royal Mail is the latest target in the firing line, for banning drivers from flying England flags from their vans, on safety grounds.

All reason at football world cups, and the country’s future prospects of life outside of the European Union (EU) is set aside, and woe betide anyone who takes a realistic position on either of these things. Leaving the EU is of course a shot in the dark where no one really knows what will happen, but all the available evidence suggests that it will not be walk in the park. But with football, we have been here many times before with the England team and should have learnt from that experience. An early exit from the competition is more likely than not.

I don’t know for sure, but this boundless optimism appears to be a uniquely English phenomenon. I can’t think of any other country where such regular failure by the national side, is routinely ignored in favour of blind faith.

Gary Young, writing an interesting piece in the Guardian, has picked up on this too. He says: ‘England rarely exists in a material form apart from as a football and rugby team. (The cricket team can include players from throughout the UK and Ireland.)

This is particularly unfortunate because it concentrates the “nation’s” identity in a sport which, thanks to former glory, promises unrealistic nostalgic pretensions of greatness that are unlikely to be repeated. Sound familiar? The problem is not that we underperform but that we have actually found our level.’

Having succumbed to wishful thinking at some previous world cups, I’m not going to do it again, but I do hope that the football team goes about its business in a less shambolic way than the government’s handling of Brexit.