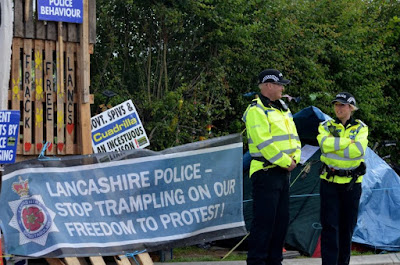 The ups and downs of struggle

For those campaigning against fracking at Cuadrilla’s Preston New Road site in Lancashire, last week was very much like riding a rollercoaster: with first the good news, followed - very quickly - by the bad news.

The good news was that the Green Party is to launch a national ‘Climate Change’ campaign (though I think George Monbiot is right to say we should now be talking about ‘Climate Breakdown’) - with a particular emphasis on the increasing dangers of fracking.

Then at the end of last week, we had the bad news: Cuadrilla had succeeded in getting, from Manchester High Court, a 40-day interim injunction against all forms of effective protest against their climate crime. This is intended to allow the UK’s first horizontal frack to take place without any more peaceful disruption during the last month of our 3 months of United Resistance.

How to react to the injunction

The injunction covers all forms of peaceful civil disobedience and direct action: including sit-downs, lock-ons and truck surfing - not just against their PNR fracking site, but also against ALL their contractors. This will inhibit, for instance, our fellow campaigners in Scotland (who’ve acted against Grampian Continental, which transports pipes to PNR) and those in Norfolk Against Fracking (who’ve been taking similar actions against two transport firms in Great Yarmouth, which transport the sand/silica needed by Cuadrilla): 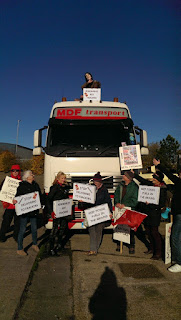 However,... it is CRUCIAL that people do not allow the injunction to frighten them off from coming to protest at Preston New Road: this, of course, is precisely what Cuadrilla - & their Tory facilitators in Westminster - want.

As long as you make no attempt to slow/prevent any vehicle entering/leaving Cuadrilla’s fracking site,

YOU ARE IN NO DANGER WHATSOEVER OF BREAKING THE INJUNCTION!

Unfortunately, immediately after the injunction had been granted, there were many posts on social media warning people off going to PNR.

This is COMPLETELY the WRONG response to the injunction!

People are perfectly safe staying on the opposite site of the road, holding placards and waving at all drivers who ‘honk’ to show their support. In fact, we need more people to be doing this than ever before: to show Cuadrilla that we are NOT going away - and to show the public that Cuadrilla and the Tories have absolutely NO social licence to force this dirtiest and thus most dangerous of all fossil fuel industries down our throats!

Thankfully, the very first Green Monday - and the first full day of protest - after the injunction showed just how safe it is to continue with protests that fall short of direct action.

Our main keynote speaker of the day was the brilliant Kate Raworth - author of the groundbreaking book, Doughnut Economics (reviewed on this blog here): 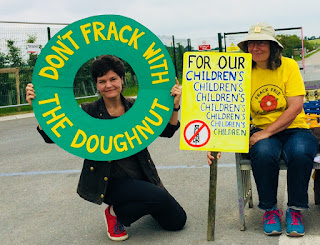 She gave a tremendously inspirational speech - from the central island in the road (also a safe space as regards the injunction) - explaining why we should absolutely NOT be ‘fracking with The Doughnut’!! This was just what was needed to lift spirits after the injunction. In particular, she showed the growing urgency of why we should adopt a sustainable economics that allows all sentient beings on this planet to live in the safe social and ecological space that is The Doughnut. It was clear to all those there why fracking was the worst possible fossil fuel industry as regards trying to prevent Planet Earth from ‘overshooting’ the various planetary boundaries: 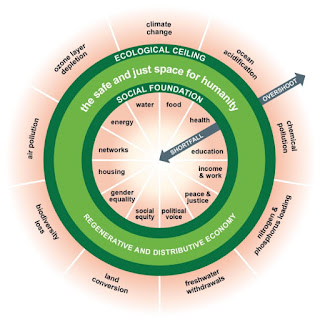 Kate was followed by our other speaker, John Ashton (former UK Special Representative on Climate Change 2006-12) who also gave an uplifting speech.


The immediate future at PNR

First of all, the Green Party Week, as part of the United Resistance campaign, begins next week, on Green Monday 11 June - speakers for that day are Amelia Womack (Deputy Leader of the Green Party) and Nick Dearden (Director of Global Justice Now!).

There are also some excellent speakers lined up for the rest of June’s
Green Mondays:

In addition, at one of our July Green Mondays, we will be welcoming Jamie Bartlett (Demos’ Director of Social Media, & author of Radicals) - he, too, will be signing copies of his book.

All this is part of our attempt to show that, despite the injunction, we are not going away - and we are not giving in! To make that message as big and as loud as possible, we need more people than ever to show up and give support - even if you can only spare an hour or so.

The kitchen at the Community Hub provides free breakfasts for those who arrive early - and lunch is taken down each day for those protesting roadside. We all need to follow these (slightly amended) words of Willie Nelson:

More information about the protest here