Have Labour Thrown Away a Chance for a Soft Brexit? 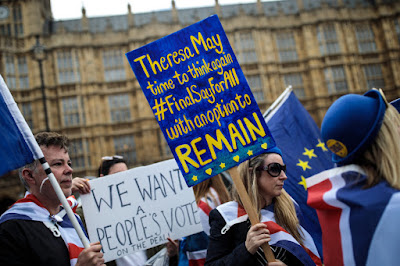 The Labour party’s slight shift towards keeping ‘access to the EU internal market’ has been painted as an opportunity missed of staying in the single market by anti-Brexit Labour MPs, their friends in the media and assorted has been Blairites, like Alistair Campbell. They were quick to brand the change as a way of defeating the government by voting for the House of Lords amendment to the Brexit Bill to remain in the European Economic Area (EEA), when it returns to the House of Commons next week.

By voting with Tory rebel MPs, they say the government can be defeated, causing ructions amongst the hard Brexit Tory head bangers, possibly leading to the fall of government and crucially, keeping the UK in the single market and customs union.

The charge is that the slight change, of keeping access to the single market, is designed to reduce support for joining the EEA, because the Labour leadership does not want stay in the single market, which along with the remaining in the customs union, would solve the Irish border problem and other issues. For example, the Dutch government advising businesses not use British spare parts, because of EU rules on the country of origin of imports.

The problem with this approach though, is that it is unlikely that the stay in the EEA amendment will be passed anyway. There may be around a dozen or so Tory rebels prepared to vote for the amendment, but there is probably many more Labour MPs in leave voting areas, who will vote against it. This pretty much means that the option of staying in the EEA will be closed off completely, for now at least.

But there is a glaring problem with the Labour leadership’s new approach of having access to the single market, in that we are in cake and eat territory, which the EU has already ruled out, on numerous occasions. In short, a mirror of the Tories fantasy thinking of the last two years, that the EU will give us anything we want, which evaporates on contact with negotiations with the EU.

However, Keir Starmer, Labour’s shadow Brexit secretary, said the indications he has had from conversations with officials in Brussels, is that they are open to negotiations if the UK dropped some of its red lines. He said:

“If the red lines change, there is a different negotiation to be had. In my discussions with them … it is clear that what they mean by that is: if we signal we want a close economic relationship then there is a conversation and negotiation to be had and it will involve some of the tools in the Norway-style toolbox, we should have that before giving up on it.”

Since Labour is less concerned about remaining under the jurisdiction of the European Court of Justice, and wants to keep EU employment and environmental protections, unlike the government, it is plausible to think the EU might move on the issue. Starmer said that some of the provisions of a new status for the UK might be very similar to the EEA, but not identical. Whether free movement of people might be up for negotiation is unclear, but there may be some room for some kind of restrictions on this.

There are fourteen other amendments to the Brexit Bill coming back from the Lords for the Commons to vote on, so there will be other opportunities to defeat the government, especially over remaining in ‘a’ customs union with the EU and perhaps most importantly, on giving MPs a ‘meaningful say’ on the deal that the Tories bring back from the negotiations with EU in the autumn (probably). If this amendment is carried, the EEA option might come back onto the agenda at that stage?

I think this gives us a clue as to Starmer’s longer term strategy here. If the government’s negotiations do not deliver access to the single market, then Labour will be fully justified in voting against it, at which stage all hell could break out in the Tory party. May would be deposed, and we would almost certainly have a general election, at which point Labour could offer its proposals, which focus groups indicate are popular with the voters.

If Labour won the election then I think the EU would be open to new negotiations, and we might well get a soft Brexit that the public, both remainers and some leavers are likely to support. It might even lead to another referendum somewhere down the line on re-joining the EU, as younger voters come onto the electoral register.

Posted by Mike Shaughnessy at 11:35