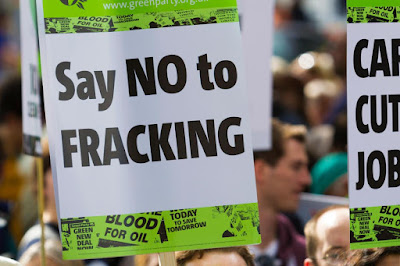 
As some of you may know already, the Green Party has recently approved a national Climate Campaign, which will be put together over the next 3 months. In fact, George Monbiot’s Green Monday visit to Preston New Road (PNR) anti-fracking protest on 25 June was, in some ways, a field trial for what slogans and approaches to adopt. There was widespread approval from those present for the phrase ‘Climate Breakdown’ (to replace the less urgent-sounding ‘Climate Change’) and for the Pacific Climate Warriors’ slogan ‘1.5 (degrees centigrade) to stay alive!’

This really IS a campaign whose time has come. Since 2000, some regions of the UK have been hit by THREE massive floods: 2005, 2009 and 2015 - each one being described, at the time, as a ‘once-in-a-lifetime’ event.  Of course, this is no ‘coincidence’ - to quote Goldfinger’s comment to James Bond:

“Once is happenstance, twice is coincidence; but three times is enemy action!”

The main ‘enemy’ here is the fossil fuel industry which is the main cause of global warming, 16 of the 17 hottest years ever recorded have been SINCE 2000!  What is more, EACH one of those years has been hotter than the previous one’s record temperatures. As regards the UK - as opposed to average global temperatures - last May was the hottest since records began; and June is likely to beat that record. 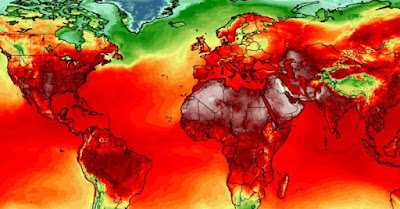 Last month, the level of carbon in the atmosphere exceeded 410 particles per million (ppm) - the vast majority of climate scientists believe that, to maintain the largely stable (and life-friendly) climate we’ve had for the past 10,000 years, we need to keep carbon levels at around 350ppm.

So not too surprising, then, that only recently in the US, Moody’s Investor Services - a Credit Ratings Agency - has warned US cities they are very likely to have their credit ratings downgraded because of… the growing risks posed by climate breakdown. Yet this government - despite claiming to be serious about reducing the UK’s carbon emissions in line with the ‘commitment’ made by the previous UK government at the UN Climate Summit in Paris, 2015 - has just approved a third runway at Heathrow which, on its own, will make meeting those commitments impossible.

Several of these issues - and others - were touched on by Julia Steinberger, Professor of Ecological Economics at Leeds University, when she spoke at the 9 July anti-fracking Green Monday at Preston New Road [PR4 3PE]: 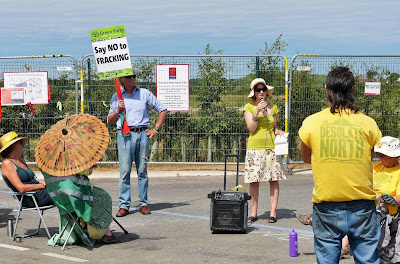 In particular, she pointed out how politicians and governments were simply ‘not joining the dots’ as regards rising carbon emissions from fossil fuels, global warming and ‘extreme weather events’ - such as this long heat-wave which, in Quebec, Canada, alone, has already claimed 33 lives.

As an extreme example of not doing joined-up thinking on climate breakdown, she pointed to the UK government’s hard push for fracking to be rolled out across the UK as quickly as possible - most recently, by changing planning laws so that fracking comes under ‘permitted development’ - thus removing the right of local councils to say ‘No!’ Below is a link to her speech:

In her speech, Julia also stressed the importance of activists campaigning on many different fronts - including by putting pressure on our elected representatives to show some climate leadership: especially as the government is showing none.

This can be surprisingly successful - even in the most unlikely places! Just last Saturday, 7 July, a small cross-party group was able to persuade, Trudy Harrison, Tory MP for Copeland (in Cumbria) to sign the Divest Parliament Pledge. 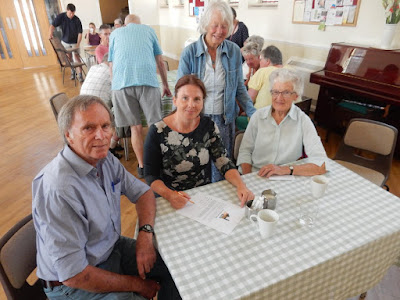 This was the culmination of a 3-month campaign which, following an earlier refusal to sign, had included a ‘bombardment’ of letters, emails and Tweets from constituents directly to the MP, along with letters and press releases to the local newspapers. In fact, that very week, the Whitehaven News published a letter - entitled ‘The clock is ticking on climate breakdown!’ - right next to Trudy Harrison’s regular Politics column!

Such work, of course, is not a replacement for direct action activism - especially on the question of fracking. As John Ashton - UK Special Representative for Climate Change 2006-12, and a frequent speaker at our PNR protests - pointed out as early as 2014:

So please come to PNR - or go to your nearest fracking site - and protest and, if possible, frustrate the would-be fracking companies. In addition, though, don’t forget to call on the government, your MPs and your councillors to start doing some joined-up thinking on global warming and climate breakdown - before it’s too late. The clock is ticking!”


More information about fracking in Lancashire can be found at: http://frackfreelancashire.org

Allan Todd is a member of Allerdale & Copeland Green Party, an anti-fracking activist and a Green Left supporter
Posted by Mike Shaughnessy at 08:50