The First Ecosocialist International Is Announced in Venezuela 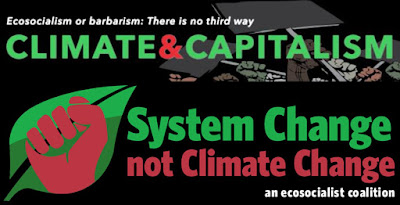 Written by Quincy Saul and first published at Telesur

The “Combined Strategy and Plan of Action,” a document of twenty pages, was collectively constructed in groups, then read and approved by consensus in assembly. This remarkable accord represents an unprecedented alliance of revolutionary subjects – indigenous, afro-descendant, ecologist, anti-colonial, Marxist, Bolivarian and beyond.

The plan of action is not uniform, but unified: It ranges from the most immediate and intimate to the most far-reaching and universal. From saving seeds to the transformation of labor unions; from natural birth to solar communism; and from confronting coal mines in South America to decolonizing Palestine and Puerto Rico, it is a 500 year plan for peace on earth.

This plan makes few demands or denunciations. Based on the premise that “only the people can save the people,” it is a plan for the peoples of the world to take their destiny into our own hands.

How is it organized? The First Ecosocialist International has no central committee. It reads in the preamble to the plan of action: “Neither is the First Ecosocialist International a single organization with a seal, or with the omnipresent danger of becoming a bureaucracy. It is simply a common program of struggle, with moments of encounter and exchange, which anyone may join by committing themselves to fulfilling one or more of the various actions agreed upon in order to relieve our Mother Earth.”

The International was organized from below by its own participants. But it was neither unnoticed nor unsupported by the Venezuelan government. Indeed this was the Bolivarian process at its finest; with local communities and grassroots movements in the lead, backed up with support from a revolutionary state – from local militias to government ministries.

The plan of action was approved and the Ecosocialist International constituted on the evening of November third in Agua Negra, and early the next morning the international delegates traveled back to Caracas for a press conference. There, at the La Casa de las Primeras Letras (the first public school in South America) they were greeted by representatives from the Ministry of Women, the Ministry of Ecosocialism, and the National Constituent Assembly. It was no accident that the two ministries which supported this grassroots initiative were those of women and ecosocialism.

Julio Escalona, a member of the National Constituent Assembly, connected the dots between patriarchy and capitalism: “Aggression against nature is aggression against women. We must establish fraternity between human beings and nature.”

Ramon Velasquez, minister of ecosocialism, said that “today begins a breakthrough with the old model of conservation of the land,” and indicated that the Venezuelan government would interpret the program of action of the First Ecosocialist International as orders. (A week later, at COP23 in Bonn, he announced the formation of the International, indicating that solutions to climate change would be found not in elite conference room but in “an ecosocialist movement which is rising up on a global scale.”)

In a time when a media war has much of the world convinced that the elected Bolivarian government in Venezuela is a dictatorship, the contact of international delegates from around the world with grassroots communities in Venezuela paints a different picture. Renowned activist and former Black Panther leader Dhoruba bin Wahad said in an interview with the ministry of women: “I'm impressed by the welcome of the people of Veroes in the state of Yaracuy, for their attention, their humility and their beauty, with whom we stayed for several days discussing the problems which affect our Mother Earth.

I'm very proud to belong to the First Ecosocialist International, and I hope we can continue with this social movement... We concluded that we must build an international movement, made up of progressive governments, activists and ordinary people, to save the planet from the devastation of the imperialist capitalist system which destroys the environment.”

Bin Wahad was joined by another former Black Panther leader, Charlotte O'Neal, who has lived and worked in Tanzania for the past forty years with the United African Alliance Community Center. In the weeks previous to the convocation of the International, O'Neal and her community made a music video “inspired by the convocation of Ecosocialist activists who met last year up in the hills of Monte Carmelo.” In an interview with the ministry of women, O'Neal reported: “This was a historic gathering. We all had an objective; to do everything possible to preserve life on this planet. We must teach our children to protect Mother Earth.”

Another delegate, Wahu Kaara, expressed her gratitude to the Venezuelan revolutionary process for being a beacon of hope for the world: “We send greetings and great recognition to the people of Venezuela, for having invited us to such an important organization... The spirit of protecting Mother Earth is very strong here in Venezuela. Commander and comrade Chavez had the vision and the commitment of unity, of a world for everyone. Even though I am from Kenya, from Africa, I am Chavista! Viva Venezuela!”

As the saying goes, bad news travels fast and good news travels slow. This may be especially the case for Venezuela, where an ongoing media embargo works around the clock to ensure that only bad news gets out of the country.

But the good news of the foundation of the First Ecosocialist International – on the 100th anniversary of the Russian Revolution no less – promises to reach the rest of the world. A “route of struggle,” outlined in the plan of action, maps out a commitment to organize regional convergences in 2018, and to convoke pan-African and pan-Asian congresses in years ahead.

The “salvation of the human species,” as outlined in the Plan of the Homeland, may be an audacious goal. But the plan of the planet, which goes even further, still departs from humble beginnings: The preamble reads, “we recognize that we are only a small part of a spiral of spirals, which has the profound intention to expand and include others, until all of us are rewoven with Mother Earth; to restore harmony within ourselves, between us, and between all the other sister beings of nature.”

The land of Guaicaipuro and Andresote, of Maria Lionza and Manuela Saenz, of Simon Bolivar and Hugo Chavez, has done it again. “If life is important to you,” as Wahu Kaara concluded, “unite yourselves with this movement.”

Posted by Mike Shaughnessy at 06:54