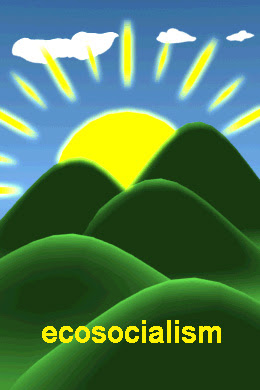 Written by Victor Quintana and first published at REVOLTINGEUROPE

Like medieval plagues, structural adjustment programmes implemented through southern Europe economies are destroying families, trampling on social rights, eliminating jobs, and making life precarious. Burying the hopes of the populations are the political parties that rotate in equal doses in one failed government after another. Given the right-wing and social democratic alternance it seems that all voters in Southern Europe are deciding is how, and at what speed their social rights are to be liquidated.

In this situation, the Left, called by many, the radical left, are adopting a new alternative to meet the challenge of these times that threaten social life, the integrity of the people, the environment, the community of living beings: Ecosocialism. It was presented at the National Congress of the Parti de Gauche (Left Party) in France. This party formed the Left Front with the French Communist Party and other smaller parties, in 2012, with Jean Luc Melenchon as presidential candidate and achieved a historic 11% of the votes in the first round.

The main axes of the Parti de Gauche’s policy ideas, which are seen very favourably by other European and North African parties are: ecosocialism as an objective; ecological planning as a programme; and citizen revolution as a strategy. Ecosocialism seeks to overcome the productivist-consumerist impasses of capitalism that are leading the planet to ecological disaster and social democracy that argues that the problems of social justice and the redistribution of wealth will be solved by increasing production. In other words, the old lure that “to share the cake it is first necessary to make it bigger.” We say this is a dead end because it is for the majority, not the beneficiaries of this exclusive productivist extractive model: international finance capital, and underpinning it, governments, international bodies like the IMF or the European Central Bank, and multinational companies.

Ecosocialism is not intended only as a utopia but a concrete radical alternative to the current economic and political system in southern Europe. A humanist alternative, yes, but not only, because the survival of the human species depends on the survival of the entire ecosystem: people, animals, plants and the whole planet are interdependent. It is a project of socialist justice, that puts to one side the productivist logic of industrialism and the polluting experiences of socialism in Eastern Europe. it bases the renewal of socialist thought on the emancipation of the individual, the radical democratization of power and education, and a new way of producing and consuming.

The economy that Ecosocialism proposes is focused on human needs, as opposed to the “supply side policies” advocated by neoliberals. It is not just about producing, whatever the cost, and then promoting consumption by inventing need, but to produce according to real human needs. It questions the private ownership of the means of production and labour relations while advocating social ownership and the development of alternatives for a social economy, from auto-gestion to cooperatives.

Going against the impositions of the “troika” of the European Central Bank, the International Monetary Fund and the European Commission (all chaired by southern Europeans!), Ecosocialism defends the sovereignty of budgetary policy, and nationalisation of the banks. It raises the question of boosting the economy, and instead of austerity proposes to relaunch it through new economic activities that take into account the ecological footprint, reducing emissions, “descarbonising” industry, generating clean energy. It is also sees it as necessary to break with the free trade agreements that have led to labour and evironmental “dumping” with countries fighting to see who damages the lives of workers the most, and destroys more natural resources.

Since Eco-socialism is an urgent project, given the environmental, economic and social and disaster of productivist financial capitalism, it requires an immediate focus of action. It must be built from below, from the convergence of the various struggles of different people. It must act and convince, not preach to the converted. It is about developing, aggregating and multiplying alternative initiatives that are already underway, defend local communities, natural resources, experiences of a social economy, solidarity, non-violence, mutual aid.

But above all, it requires a citizen’s revolution, as electoral alternation, the mere change of leadership, is not enough. To counter the power of the oligarchies, alternative centres of power and popular sovereignty must be built in all aspects of social life, in the daily struggles of the people. The 18 theses of Ecosocialism highlight this very well: “Neither enlightened vanguard, nor green dictatorship, nor ethnocentric introversion (but) the democratic citizen’s revolution.” People are not the problem, but the solution to the current crisis of human civilization.

Thus posed, Ecosocialism is a radical and democratic alternative to the crisis now afflicting and undermining the dignity of Greece, Italy, Spain, Portugal, Ireland, Cyprus and, to a lesser degree France. It will be seen how it can be combined with the ongoing experiences in Latin America, both the Buen Vivir, or good life of indigenous communities, and the Latin American Socialism of the XXI Century, as well as other communities, organisations and parties across Europe.

Victor M. Quintana is an adviser to Democratic Peasant Front of Chihuahua, and researcher / professor at the Autonomous University of Ciudad Juarez, Mexico.

Posted by Mike Shaughnessy at 08:18