Why are the Incompetent Tories at around 40% in the Opinion Polls? 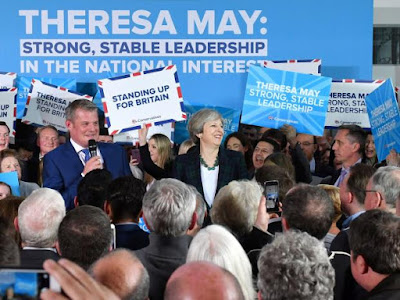 The latest YouGov opinion poll has the Tories dipping under 40%, just, at 39%, but other polls have them at or just over 40% if a general election were called tomorrow. This is down on the 42% that the Tories scored in last June’s general election, but only slightly. How can this be, given the complete shambles that they making of Brexit, and the general inertia in other policy areas? The constant squabbling amongst ministers and MPs, over Brexit mainly, and the hapless performance of the prime minister, Theresa May, are making them, in my eyes anyway, a laughing stock. But 40% of the public seem prepared to back them.

We also have a foreign secretary, Boris Johnson, who not only contradicts Cabinet policy, but runs around the world saying stupid things, and is a general embarrassment to the country internationally. We have inflation running at the highest rate for five years, wages stagnating, at best, a record public borrowing of 90% of GDP, and public services cut to the bone. The Tories ill deserved reputation for economic competence is in tatters. It beggars belief that so many people are content with the government’s performance.

In the heyday of new Labour in the late 1990s and early noughties the Tory’s support was down to its core 32% to 33%, and some of this may have peeled off now because of the hard-line Brexit stance that the government has taken, particularly before the general election. Not all Tory voters are Eurosceptic. So, say their normally core support is now down to about 30%, where does the other 10% come from?

We can see from the demographic breakdown of these opinion polls that Tory support is concentrated among older voters. There is a tendency for people (especially men) to get more conservative (small ‘c’) as they get older. Older people tend to have something to ‘conserve’ after a lifetime of work, and Tory policies do tend to favour older voters, together with older voters doing well out of the rise in house prices.

Under the leadership of David Cameron older voters were specifically courted, but in this year’s general election, this wasn’t enough for Theresa May to win an overall majority in Parliament. Which explains why the government is making noises about taking tax breaks off older people and giving them to younger voters. Quite apart from the fairness issue, this does make sense from an electoral point of view, but it also carries a huge risk too.

Think back to the Tories back of a fag packet plan to make people use the value of their homes to pay for their social care, which was very unpopular, and was perhaps one of the reasons the government lost their majority. I remember thinking when this policy was first announced it was a very un-Tory like policy. Well, what they are now suggesting in terms tax breaks would be even more unpopular with older voters. To hit the only age demographic which supports you, is very risky indeed.

The opinion polls also indicate support for the Tories from people who voted to leave the EU in last year’s referendum, and these voters tend to be older as well, but may account for some of the extra 10% on top of the Tories core support.

A third factor in the 40% support may be a fear of a Corbyn led Labour government. Older voters will remember the 1970s which was the last time Labour delivered anything remotely like social democratic policies. It didn’t end well though, with the infamous ‘winter of discontent’ when there was massive industrial action from trade unions, shortages of basics like bread and milk, and with inflation in double figures. To younger voters this probably seems like ancient history, but will still be fresh in the minds of older voters.


Although Labour are recording a small lead over the Tories in most of the polls, it does mean that the next general election is wide open, and until some of the stubborn 40% peels away from the Tories, it will remain that way. Of course, the grim reaper will take these older voters sooner or later, but for now there is everything to play for.

Posted by Mike Shaughnessy at 10:20