What are the Implications of Catalonian Independence for the UK? 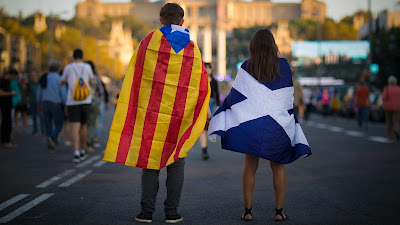 There is a big question mark over whether Catalonia will actually get away with Friday’s vote in the Catalan Parliament to declare themselves to be an Republic independent from Spain. The Spanish government has taken over control Catalonia and says it will call new elections within six months, which opinion polls indicate would see the independence parties lose control of Parliament. A campaign of civil disobedience is being organised by Catalan civil society which may make the country ungovernable from Madrid.

If somehow the Catalans succeed in achieving a breakaway from the Spanish state, it may well have an impact in the UK. The UK has played a part in events in Catalonia, by allowing Scotland to have a referendum in 2014, when, ultimately, the Scots voted to stay in the UK, but the fact they were allowed to hold such a vote, quite legitimately, encouraged the Catalans to demand their own referendum on independence.

I have visited Catalonia a few times, the last time in 2014, just a couple of months before the Scottish referendum. Catalonia was a nation that was last independent almost as long ago as Scotland was, and on the Spanish side of the border almost everyone was flying Catalan flags from their balconies and with a campaign in full swing to demand a referendum on Catalan independence. The Scotland/UK situation featured heavily in the independence campaign literature.

Interestingly, on the French side of the border, almost as many Catalan flags could be seen on display, but usually side by side with the French tricolour. I think the difference is down to the recent history of Spain, with the Franco regime still in the consciousness of Catalans, where Barcelona was amongst the last places to hold out on the Republican side against Franco’s fascists, in the Spanish civil war, from 1936 to 1939.

There is a difference in the situation of Scotland and Catalonia, in that their basis for remaining in a union with adjacent countries, constitutionally. The Scots entered the union with England in 1707 but there was no provision in the Act of Union for the Scots not to change their minds and revert to independence at some time in the future.

Contrast this with the Spanish constitution adopted after nearly forty years of fascism in 1978, which specifically forbids regions from withdrawing from the union with Spain. This is largely the reason why the situation has got where it is today in Catalonia. It is quite likely that if the Catalans had been allowed a legitimate referendum, they would have voted to remain in Spain, but after recent events, I’m not so sure now that they would. Who wants to remain in a country that sends its police thugs to beat you up, for trying vote?

The 1978 constitution was overwhelmingly supported by a referendum in all parts of Spain, but census data and results were questioned by some media, revealing up to 30% of irregularities in the census in certain provinces, and with many people allegedly being unable to vote while others voted twice. It is probably time to change this constitution, if the crisis in Catalonia is to be satisfactorily resolved. The period since 1978 is the only time that Catalonia has been part of Spain voluntarily.

Will Scotland’s interest in independence be rekindled by the action of the Catalans? There has been no noticeable shift in voting intentions in opinion polls on Scottish independence, even after the UK Brexit vote, but if Catalonia makes a success of it, what then? The Scottish First Minister, Nicola Sturgeon, has expressed support for Catalonia.

Then there is Northern Ireland, where their status as members of the UK, will be subject to some future referendum, under the Good Friday Agreement of 1998. When the demographics favour the nationalist population, and it is heading in that direction, the Northern Irish may vote to join the Republic of Ireland. Brexit may speed up this process too.

Sinn Féin President Gerry Adams has said on October 27 that the Declaration of Independence made by the Catalan Parliament is “a historic step towards Catalan statehood” and “it is time for Spain to seize the opportunity for dialogue”. He continued:

“The democratically elected Parliament of Catalonia have today made a Declaration of Independence. It is a historic step towards Catalan statehood. The right to self-determination is a corner stone of international law and this declaration must be respected.

I want to express my solidarity with the people of Catalonia on this historic day. I believe it is now incumbent on the Spanish government to agree an internationally mediated process on the way forward. That is what the Catalan government have offered. That goodwill must be reciprocated.” 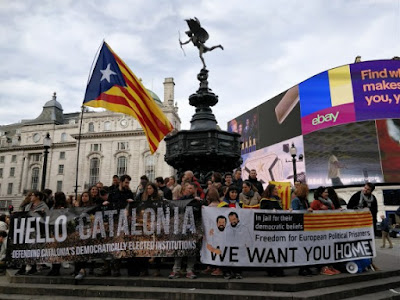 Support for Catalonia in London

In the rest of the UK, where next might demand a referendum, on at least greater devolution if not full independence? Wales, Cornwall, Yorkshire and maybe even London might be next? The rest of the English regions would surely want to fight their corner too, and this is already happening to an extent, with the big cities (including London) banding together to control more powers at local level.

Interestingly, at the time of the Scottish referendum I saw an opinion poll of Londoners which indicated that 20% supported the idea of an independent London. Last week another poll asked London dwellers how they describe their nationality and 46%, by far the most popular description, said ‘Londoner’. If asked this question abroad, many foreigners have said to me that Londoners and New Yorkers use their city name instead of country.


The acquiescence of national governments and supranational institutions like the European Union to globalisation, are increasingly leading to regional tensions, as the real powers shaping people’s lives is seemingly left to remote bodies and global corporations. This tendency is likely to increase unless meaningful powers are returned to a more local level, everywhere.
Posted by Mike Shaughnessy at 08:02