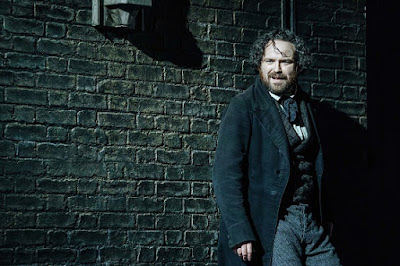 I went to see this play written by Richard Bean and Clive Coleman last week, at the new ‘commercial’ theatre, many ironies to ponder there, Tower Theatre, on London’s south bank, near Tower Bridge. The theatre is spacious and with unimpeded views but as with so many new purpose built theatres, and much of the south bank, it feels a bit soulless but is very functional.

But to the play itself. The stage set is very good, with a backdrop of a grey London of smoking chimneys which kind of gets you into the right mood for the action. You could almost feel Victorian London in the atmosphere.

The play is a comedy, bordering on farce in parts, about the life of the 32 year old Karl Marx played by Rory Kinnear, and set in 1850 in Soho in London. The play is billed as ‘semi-true’ and anyone familiar with Marx’s life and work will recognise parts of the story.

Marx had only recently moved to London, after being chased out of various European countries after working class uprisings in 1848, the year Marx published his Communist Manifesto. In London he was in debt, pursued by creditors and police and is depicted as a ‘bit of a lad’ as some might say, drinking in many of London’s pubs, and involved in sexual affairs.

Much of the rest of the play features Marx’s home life in a small apartment, his wife and children, and their worries over debt. This is interspersed with the almost constant presence of Friedrich Engels, played by Oliver Chris, who laments Marx’s lack of application. The play is entertaining, but for me there is not enough politics in it.

There is some though, and my favourite scene is set at a meeting of the Communist League, where there is a split between a faction that wants to start a bloody uprising and Marx and Engels who argue against this course of action, on the grounds of it being violently suppressed and unnecessary.

As Marx says, the inevitable contradictions of the capitalist system will cause a crisis where the banks fail and the system collapses, so much so that they will be ‘begged’ to take control and introduce socialism. This is historically accurate, with Marx even advocating working with sympathetic bourgeoisie forces to topple the system first, then to argue for full socialism.

Of course we have recent experience of a banking crisis, but people weren’t begging for socialism. In the UK we elected a Tory government and in the US they elected Donald Trump as president. Previous recessions haven’t led to socialism either, and there were three in Marx’s later life, beginning with The Panic of 1857, which has been called the first global recession.

A contentious issue for revolutionary socialists to this day, should we wait for an opening to come along as the capitalist system goes into one of its cyclic crises, or should the issue be forced by an uprising of the masses? It doesn’t make much sense to try to bring about change when things are going relatively well, but the idea that socialism is somehow an inevitable outcome of capitalism’s contradictions has not been the historical experience. Why should it be in the future?

The disagreement at the Communist League meeting leads to Marx being called a coward, and ends with a duel being demanded, which takes place on Hampstead Heath. Marx survives and his finances improve a little. There is a rather bizarre scene of a fight in the reading room of the British Museum, where Charles Darwin is present.

Young Marx will be broadcast by National Theatre Live on 7 December.

Posted by Mike Shaughnessy at 10:14