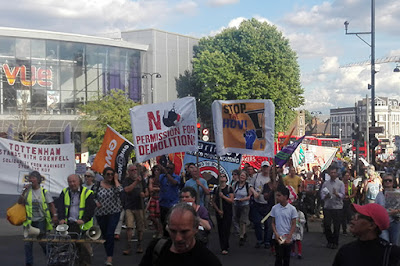 I am a former social services director in London and now retired from twenty subsequent years as a consultant in health and social development with particular experience in policies aimed at reducing poverty and inequalities, acting for governments in Europe and Asia and with UK donors.

As an active member of Haringey Over 50s forum in north London and chair of the Older Peoples Reference Group in the borough I took up the challenge posed to living conditions of vulnerable people, particularly frail elders, by the establishment of the Haringey Development Vehicle (HDV), the intended new Limited Liability Partnership owned 50% by the Council and 50% by Lendlease, the Australian multi-national corporation.

Many individuals and groups have joined in this campaign, now called StopHDV which is supported by both the constituency Labour Parties and the two MPs, despite which the current leadership insists it must go ahead. It is also supported by the LibDems and Green Parties, and by the tenants and residents federation, and trades unions including my own, Haringey Unite Community branch, and many affiliated campaigns and individuals.

The Judicial Review on the Haringey Development Vehicle takes place in the High Court on The Strand in London on 25 and 26 October, and I hope some supporters can make it to that, either outside from 9 to10 am or in the public seating from 10 am.

The challenge is to Haringey Council setting up a supposedly 50/50 partnership with the Australian multi-national corporation, Lendlease, to take over land and property belonging to the Council, involving demolition and regeneration of estates as well as business premises and private houses in 'red-lined areas’. If it goes ahead it will be the biggest such transfer of local authority resources to a private entity in UK history. Lendlease have now joined Haringey as a defendant of the HDV in court.

None of this would have been possible without the amazing support from the several hundred people who have contributed through our crowdfunding to raise £25,000. £20,000 of this is required for our community cap on any awards which will be requested of the judge. The solicitors for the case, Leigh Day, and the barristers have put a great deal of work in to it, and as a result I am now asking for another £5,000 to make up the fees and costs accruing.

Please donate at Crowd Justice to help the extra costs.

I hope you will make another donation, small or large, if you possibly can.

I am unhappy with the HDV model and its governance arrangements as chosen by the Council and about the process followed including lack of consultation on this vehicle, loss of democratic control over the homes and other public assets involved, and the Council’s failure to ensure that the HDV will comply in future with obligations such as the Human Rights Act, the Freedom of Information Act and the Public Sector Equality Duty.

In summary the claims are challenging:

1] this being set up as a partnership[LLP] rather than as a company as it is acting for a commercial purpose;

2] the HDV not having been consulted on and the manner of its development up to the July 2017 Cabinet decision;

3] the public sector equality duty of the Equality Act 2010 having been inadequately addressed;

4]the decision to establish the HDV as  constituting a strategic move on behalf of the Council not having been taken to full Council.

Haringey and Lendlease maintain publicly that thousands of homes and jobs will be won for the borough from the HDV investment, and yet none of the risk to the public purse nor viability assessments, nor due diligence carried out, has been shared beyond the few members of the Cabinet.

And the Leader of the Council’s insistence is on continuing despite the Council’s Overview and Scrutiny Committee, across party lines, demanding a halt for further examination, and despite a week of expert witness scrutiny by the Housing and Regeneration Panel, objections by tenants and residents  and deputations by groups, and Call-ins of the decision to proceed.

If the HDV goes ahead the Council will be committed immediately to transfer its entire commercial portfolio to the HDV in return for £45 million investment from Lendlease and its first category of land in Wood Green estate and Wood Green Civic Centre.

It then intends to transfer up to £2 billion worth of property which includes the demolition of Northumberland Park estate, next to the new Tottenham Hotspur stadium, and some surrounding leasehold housing, together home to several thousand people, some of them single pensioners who will be at great risk if moved.

Other areas in the west of the borough are also scheduled for development. Beyond that intentions are outlined in the next categories for Broadwater Farm in Tottenham, and then potentially for any land and property  ‘under-used’ or considered ‘surplus’.

The Council outline a Right of Return and detailed consultation to come on localities affected, but once the HDV is set up and going these will amount to ‘paper promises’ at best, as alternative approaches such as estate refurbishment and local community–backed plans are ruled out.

Moreover Lendlease as the commercial partner in the HDV have been exempted from certain requirements of Council policy so that guarantees within direct Council oversight, including security of tenure, no longer apply.

The legal argument here is a matter of widespread concern at a lack of accountability and democratic process, and indeed relates to a concern for the fundamental rights of people to a home and support in their community.

It has ramifications far beyond Haringey regarding the ways in which social housing and truly affordable housing are being squeezed out by corporate actions in collusion with councils, many of them Labour councils, as the record of Lendlease in Southwark shows all too dramatically. All evidence to date points to a further loss of homes for poorer people and an influx of better off rented and purchased homes in new high densities which deny or destroy existing communities.

The HDV has not been able to demonstrate in any way how its establishment and operation will change things for the better, especially in such an unpredictable economic climate, and the Council putting all its development ‘eggs in the HDV basket’ in such an untested way is being irresponsible with public money. That is why it must be stopped, and the Council think – and listen –again.