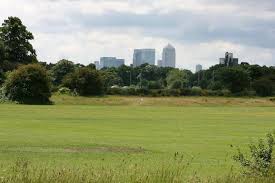 Wanstead Flats in north east London is a Commons

The Guardian columnist, George Monbiot, wrote a piece on Wednesday, entitled 'The case for despair is made. Now let’s start to get out of the mess we’re in.' Those familiar with his writing will know that his political outlook is of a lefty liberal, I hear he was an anarchist in his youth, but there is nothing too radical about his politics today. That is not to say that he doesn't write a good, interesting column, and he is good on green issues too. I've learnt stuff from him.

We have looked at Monbiot's politics before on this blog, and concluded that he is a green neo-Keynesian, so his column caught me by surprise a little, when I realised he was writing about the commons. I became less surprised as I read through the piece though, because Monbiot applies a kind of liberal, market interpretation to the commons, as though he is trying to shoe-horn it into the capitalist system.

He scoffs at Corbyn's Keynesianism as irrelevant for good measure, but then describes nothing too scary for the establishment. It's this way of thinking which takes Monbiot away from any sort of radical politics, but he is at least moving in the right direction here.

As he points out, the commons do still exist in the capitalist, neo-liberal world of today, albeit they are shrinking fast, but with some heartening new initiatives as well. But surely the point is that the remaining commons are being enclosed, and new commons are largely isolated entities, a kind of last gasp of a once thriving alternative economy.

Monbiot says, 'The market alone cannot meet our needs; nor can the state,' which is quite right, and the commons, which is a very important concept in ecosocialism, is one of the ways an alternative economy would work. So why does he then suggest things like auctioning licences for burning fossil fuels and banning corporations from securing intellectual property rights? Why not just ban the corporations from existing at all, and all private property rights, so production can then be undertaken by cooperatives, in an ecologically centric way? Which is another form of commons.

Because all of this would be a direct threat to the capitalist system, and therefore unthinkable, for a Guardian columnist, anyway. The logic of Monbiot's thinking should be to replace capitalism, rather than all of this good intentioned tinkering. Surely he must know that the commons is incompatible with the how capitalism works. It must enclose, or else it will not be able to expand, and if it can't grow, it will die.

This doesn't mean that struggles to maintain the commons and the invention of new forms of commons are not very important. But they need to be seen as points of conflict with the system, and used to educate people about the subject, so they will see the status quo from a different angle. People live the struggle between capital and commons, and others see it happening and learn. We probably need to go through this stage to build the momentum for revolutionary thinking. Peaceful revolution, of course.

The commons doesn’t need to be rooted to a strip of land, it is an idea about struggle against property and commodification, and the battle between the commons and those who would enclose it manifests itself in many ways.

The ecosocialist writer, Joel Kovel writes in his book The Enemy of Nature, ‘Each in its way is a battle for a kind of commons, a piece of human ecosystem, more integral, more formed, more realised. Each points towards ecosocialism.’

This where we need to get to, and Monbiot's piece may contribute to the debate, so I welcome it. He may be even be changing his own thinking, edging a little closer to an ecosocialist solution to our problems.

Posted by Mike Shaughnessy at 10:47