Degrowth Is Punk as Fuck 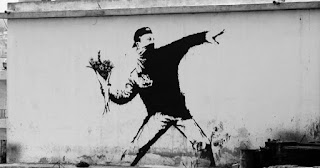 Very serious people often tell us that the word “degrowth” is too negative. People like happy, positive, nice things. Sure, the economy is systematically destroying life on earth. But nobody wants to degrow it.

Instead, these critics prefer words like “post-growth,” “a-growth,” "re-growth", even the mythical “green growth.” They want to create a circular economy, a green economy, a new economy, a prosperity economy, well-being economy, or a steady-state economy.

Here’s what degrowth naysayers don’t seem to get: degrowth is actually punk as fuck. We’re nonconforming, anti-establishment, DIY punks. And we’re not trying to sound nice. Take your positivity and shove it.

The term "sustainable development" shows what happens to concepts that aren't hardcore. It's been integrated into international agreements for over two decades, yet here we are, at the precipice of reaching dozens of tipping points that will send Earth's climate spinning into chaos.

The problem wasn't that not enough people got behind sustainable development, it was that everyone got behind it because it didn't challenge anything at all. In 2014, Goldman Sachs commissioned a report “Attaining Sustainable Development of Oil and Gas in North America” (emphasis ours).

That's why we use degrowth. Goldman Sachs won't be able to co-opt it. Unlike post-growth, re-growth, or a-growth, we think degrowth has something special: that "de-" is a little middle finger at the establishment.

Very serious people shoot back that degrowth, in using the word “growth,” just strengthens the language of the status quo. All it does, according to “framing” enthusiasts, is further reinforce the dominant pro-growth “frame” that supposedly makes degrowth seem scary and bad.

To this, degrowthers respond reasonably: we actually don’t give a flying fuck. We don’t want to be fake-nice about it. We want to name and shame our enemy.

Very serious people claim that degrowth, like some punk culture, is nihilistic, that it doesn’t inspire hope or change. We denounce growth but do not describe alternative values, they say.

Sure, degrowth is nihilistic, but in the Nietzschean sense: a healthy refusal of the present, one that is necessary to think differently. We reject growth to make space for different concepts and values: international solidarity, the commons, financial reform, basic income, conviviality, care, to name a few. We've done our research, and we urge for practical policy proposals, long-term utopian visions, and disobedient direct actions—because the very serious politicians aren’t listening yet. If you've come to any of the last five degrowth conferences, you'll know how forward-looking and positive degrowthers can be.

Very serious people think that punks don’t get very far: no one listens to them, no one empathizes with them. Why not focus on the establishment, why not bribe them with words that are easier to swallow?

We beg to differ. Think of the Occupy movement. With little plan beyond stirring shit up, those punks redefined politics and forced politicians to finally pay attention to inequality. Think of the Windows employees who spent their time at the office coding open-source programs, using Microsoft money to pave the way for a new kind of cyberspace: one based on sharing and mutual aid. It wasn't the soothing March on Washington For Jobs And Freedom that convinced President Kennedy to sign the civil rights act; it was the threat of disaffected black youths rioting in the streets in every major US city.

This fall, we stood with Standing Rock. The Lakota gathered against the DAPL not to be nice, but to register their dissent, to stand in the way of a system that has tried to crush them for centuries. Their dissent delivered a striking victory against the establishment.

We understand, but don’t agree with, those who voted Brexit and Trump as a big “fuck you” to the establishment. They are punks too, and we lament that the Left has been so preoccupied with being nice, professional, and reasonable, encouraging many of these promising punks to vote for a new breed of white supremacists and oligarchs.

We think the suburbanites tinkering in their backyard are punks as well—their DIY creations objections to the industrial economy. We are in solidarity with the foot-draggers, the wildcat strikers who don’t care about their company’s competitiveness. We agree with Paul Lafargue, who scoffed at “the right to work” and demanded “the right to be lazy!”

To us, nurses, teachers, small farmers, and childcare workers are punks too. Capitalist society considers these jobs basically worthless, but people do them anyway, because fuck you, that's what they do.

At home, many of us degrowthers are squatters. Some of us dumpster dive and graffiti over advertising. We cook big meals for each other. We throw big weddings and big funerals. We are weirdos who’ve never quite fit in in board rooms.

Last week, one of our own presented degrowth inside the pearly halls of the UK House of Commons. Federico Demaria, one of the co-editors of the book Degrowth: A vocabulary for a new era, shared the parliamentary stage with Kate Raworth, who coined the unobjectionable phrase Doughnut Economics, Tim Jackson, who wrote Prosperity without Growth, and two of the authors of the 1972 book Limits to Growth. Unlike the other panelists, Federico was willing to be radical, willing to think differently. The audience loved it: he wasn't boring. Of course, some of his very serious co-panelists patronized him as a big-dreaming, radical youngster.

The serious people tell us that politicians will never support degrowth. They tell us to stop acting like teenagers, put on suits, and come up with innocuous words that the representatives of every country will applaud in the UN General Assembly.

We know that sort of work is necessary. Sometimes you will find us putting on those awkwardly fitting suits and creeping through the halls of power, our tattoos and piercings and bad haircuts not very well hidden.

But that’s not our audience. Our sympathies lie with the misfits, the outcasts, the mischief-makers, the queers. They are our kind of people. And that’s why people like us: at heart, whoever feels like a political outsider is a bit of a punk.

Aaron Vansintjan is a PhD student at Birkbeck, University of London and the Institute of Environmental Science and Technology at the Autonomous University of Barcelona. He is an editor of the website Uneven Earth and enjoys wild fermentations, decolonization, and long bicycle rides.

Sam Bliss is a PhD student at the University of Vermont in the Economics for the Anthropocene research initiative. He loves reading, singing, and slow travel and strongly dislikes post-environmentalism.

Posted by Mike Shaughnessy at 08:49