Natalie Bennett: We have to ban zero-hours contracts 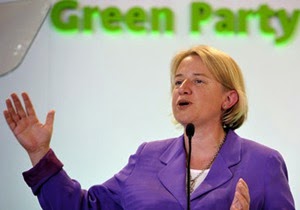 The Green Party’s leader put forward her views on education, pay and the NHS in a live debate with young voters

Broadcast live on YouTube, the series is created by Bite the Ballot, an organisation that empowers young people to make informed voting decisions.

Bennett’s appearance was significant as she has been omitted from the BBC’s scheduled debates that will mark the run up to the general election.

You can watch the full debate here.

The questions that the audience asked Bennett showed that jobs and education are at the top of their list of worries.

When asked who she proposed would cover the cost of the free higher education the Greens have promised, Bennett pointed to rich individuals and multinational companies who do not pay their taxes.

She stressed that there is a need for society to be “rebalanced” and that multinationals need to take responsibility for contributing towards society.

The issue of equality also informs the Greens’ policy on drugs.

Bennett was adamant that drugs “should be treated as a health issue, not a criminal justice issue”, and said that the amount of discretion given to police means that more people from minority backgrounds are arrested for drug misuse than people from other backgrounds.

This, she said, is despite the fact that more privileged people are no less likely to be using drugs.
Bennett also pledged to end zero-hours contracts, and stated that her party was “absolutely opposed” to unpaid internships. Alongside workers who currently receive a minimum wage, interns, she said, should be paid the Living Wage as a minimum.

The NHS was also a key issue in the debate. Bennett warned that the UK is ‘racing towards’ an American style privatised health system, and criticised the private finance initiatives (PFI) which are holding the NHS hostage with huge interest rates and service charges.

As part of the Greens’ plans for the NHS, Bennett promised that more detail on mental healthcare would be added to their manifesto. She criticised the way that mental health problems are regarded as less urgent than physical ones, and pledged parity of esteem for people with mental illness.

On education, Bennett said that no school run by a faith group should receive government money. She predicted that in the event of this becoming legislation, many faith schools would choose to come into the secular system rather than become private.

The school system also face criticism from the Green leader over its competitive nature. Bennett said that the system should be based on cooperation, and shold include a more practical curriculum covering things like relationships, health and nutrition, in order to give pupils an “education for life”.

Ruby Stockham is a staff writer at Left Foot Forward. Follow her on Twitter and first published here
Posted by Mike Shaughnessy at 11:41