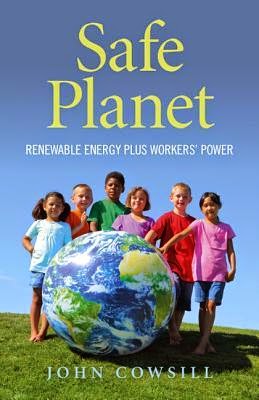 Book Review: Can Marxist ideas help save the planet?


Those of us involved in the struggle for climate action are very aware how time is running out for the planet.  There are two sides to the problem: the technical and the political.  We need to understand whether there is a solution using currently available technology that can be applied in time, but also why progress is so difficult and slow that many of us are beginning to despair.

John Cowsill’s new and important book is in two parts, considering both these aspects.  In the first part he tackles the technical question.  Do the numbers add up?  He takes on some prominent commentators on climate change, George Monbiot and Prof. David Mackay (author of Sustainability without the Hot Air), both of them on record saying that renewables cannot supply all the energy we need, and takes their arguments apart, pointing out logic and arithmetic errors.  He then takes us step by step through the relevant calculations to show how the UK can convert to 100% renewables and how quickly we need to do it. His approach is that of an engineer. The devil is in the detail and we need to understand his arguments if we are to hold our own in discussions about the feasibility of what we advocate.

John’s scheme is based more or less completely on wind turbines, and contains some ingenious ideas about how we can solve the problems and drawbacks of wind power. His is just one of several books working out in some detail how we could decarbonise our energy generation.  None of them need to be considered compulsory blueprints for the transition to a zero-carbon economy, but together they form a convincing body of evidence that should give us hope.

But here’s the rub.  The problem is one that can only be solved on a government and international scale and the political will is conspicuously absent.  John tackles this in the second part of his book.

Identifying the cause of the problem as capitalism and the drive for profits, and the solution as the agency of the working class is something many readers of this website will broadly agree on. Connecting that simple position to an analysis that would guide the movement for climate action and allow it to move forward has proved to be much more difficult.

Presumably addressing the many activists who are not Marxists, John devotes an entire chapter to a broad but very detailed coverage of classical Marxist economics and the politics of the revolutionary left. The chapter is somehow isolated from the rest of the book and I fear will not convince many of those for whom this material is not already their bread and butter.

John’s final chapter is better at drawing the two strands of this problem together. His attempt to bring revolutionary socialist politics to bear on the urgent problem of climate change is a brave and much needed step. He urges us to join a union, but what about the Campaign against Climate Change trade union group?  What about the explosion of anti-fracking activity?  Mostly they are not Marxist, but they have a potential to learn in struggle. So what should Marxists be discussing with them?   It’s disappointing that John fails to connect theory with the practice of climate action in the here and now.

Written by Ewa Barker and first published at RS21

Posted by Mike Shaughnessy at 10:32