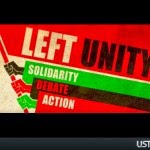 Apparently the motion below was submitted to the Left Unity conference last weekend, but LU people on Facebook say it was defeated. I find it astonishing that anyone, even a small minority in LU can support these murderers, rapists and thugs, particularly as they besiege Kobane where a fledgling ecosocialist type grouping of Kurds are desperately holding out against them.

“The call for the Caliphate, however vague and malleable the concept is, reflects a strong internationalism among Muslims, reinforced and reproduced for hundreds of millions each year by the Haj (Pilgrimage to Mecca), which breaks down and demotes any attachments to nation states of origin. At bottom the caliphate means one government for all Muslims, in which non-Muslims who accept its authority are also welcome.”

“To show solidarity with the people of the Middle East by supporting the end of the structure of the divided nation states imposed by the Versailles settlement and their replacement by a Caliphatetype polity in which diversity and autonomy are protected and nurtured and the mass of people can effectively control executive authority’. Left Unity distances itself specifically from the use of intemperate, inaccurate and moralist language such as ‘terrorism’, ‘evil’, ‘fundamentalist’, ‘viciously reactionary’, ‘murderous’, genocidal’, etc in discussion about the Middle East; these terms are deployed by people and forces seeking not to understand or analyse, but to demonise in order to dominate, and they have no place within socialist discourse. Left Unity Resolution.

“We also distance ourselves from the Eurocentric brand of secularism that believes that the peoples of the Middle East must accept western terms of reference by consigning their religious faith to a separate part of their lives from their political aspirations, if they are to develop progressive societies.”

Posted by Mike Shaughnessy at 11:15