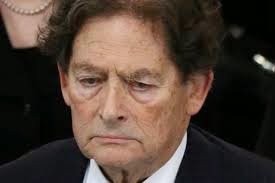 Lord Lawson faces increasing scepticism about the independence of his climate denial charity as the names of two of his anonymous donors with links to the tobacco and oil funded Institute of Economic Affairs are disclosed for the first time.

The former chancellor, who retains considerable influence over his successor George Osborne, has successfully kept the identities of almost all his financial backers a closely guarded secret five years after the foundation was first launched, despite the consternation of MPs and climate campaigners alike.

But now Neil Record, the founding chairman of his own specialist currency management company, and trustee of the free market Institute of Economic Affairs think tank, has been named for the first time as a financial backer.

Asked how much he gave to Lawson’s charity, he replied this was “a private matter on which I am not prepared to comment further.” DeSmog UK estimates the donations to be higher than £100,000.

Lord Vinson, who was instrumental in the rise to power of the late Margaret Thatcher, has also been named as a GWPF funder for the first time. The industrialist and peer was made “Life Vice-President” of the IEA, having worked closely with its first director general, Sir Ralph Harris.

ALSO SEE: LAWSON'S HOT AND COLD AFFAIR WITH THE IEA

Vinson also set up the Centre for Policy Studies with fellow free market zealots Keith Joseph and Thatcher in 1974 supported by the IEA. The CPS, funded by both the tobacco and oil industries, secured Thatcher's rise to power.

Vinson has donated £15,000 to the Global Warming Policy Foundation in the first five years through his own charity, according to documents submitted to the Charity Commission. “I think they are a very admirable institution,” he told me.

A third GWPF funder, Michael Hintze, has previously been named by The Guardian although the city investor has refused to confirm the report and disclose the true extent of his largess. Hintze runs the £5 billion hedge fund CQS and is a generous donor to the Conservative party.

All three men named have worked closely with the Institute of Economic Affairs, the Westminster-based think tank which has for decades accepted funding from cigarette and petrol multinationals while attacking both the science of tobacco cancer and climate change.

An investigation by the newly launched climate website DeSmog UK has established that Record privately donated £36,000 to the IEA to fund a seminar starring Lawson on the same day in November 2009 that the one-time chancellor launched the GWPF in the House of Commons. Lawson’s speaking fees are up to £12,000 per engagement.

Record has told how his confidence in climate science was first called into question when he attended an earlier talk by the American scientist Dr S Fred Singer also attended by Lawson. Singer has a long history of promoting climate denial and has been accused of misleading the public about his own financial support from major oil companies, including ExxonMobil.

Record is also named as a board member of the new Global Warming Policy Forum. When asked about his donation to the foundation, Record said he has “never had any involvement with the energy sector in any capacity” adding his donation was “paid for with my personal money, not with corporate funds.”

Record said in a letter: “The organisers (i.e. the IEA) invited both Lord Lawson and myself to a dinner after the debate…and there I learned about the Global Warming Policy Foundation, of which I had not heard before.

“[Lawson] invited me to meet his staff, and as a result of that, I decided the best way in which I could be of some use in furthering sensible debate in the whole climate change arena was to become a supporter (i.e. donor) to the GWPF.”

The IEA established its industry-funded Environment Unit in the early 1990s and published the first reports in the UK aimed at undermining the then burgeoning science of climate change.
The institute was also instrumental in establishing the Covent Garden-based International Policy Network, which during its lifetime accepted funding from ExxonMobil while attending major conferences around the world to raise fears about the policy implications of climate change.

Mark Littlewood, the current director general of the IEA, personally introduced Record to Lawson after the climate event in November 2009. He said he only “vaguely” knew Lawson but that he was not active in the climate debate because the GWPF took this role.

He also confirmed last year that the IEA continues to receive funding from the oil company BP. He added: “…we jealously guard our editorial independence and no industry group can commission research from us - but if that's understood I'll bank a cheque from the tobacco industry without a single problem.”

Lord Vinson donated £5,000 to the GWPF in 2011 and then doubled his grant to £10,000 last year. This second grant was recorded alongside a donation to the Prince’s Countryside Fund under the category, “For the advancement of environmental protection or improvement”. Vinson has been a long time funder of the IEA, as well as its once-influential climate denying offshoot the IPN.

The author of this article has been quoted in The Guardian this morning saying: “Lawson has stubbornly refused to name his donors even though such secrecy must undermine the trust the public has in his climate denial thinktank,” said Brendan Montague, editor of DeSmog UK. “But now we might begin to understand why.

“The evidence suggests many of Lawson’s funders are associated with the radically neoliberal IEA, which has a long history of attacking climate science and regulations while accepting money from oil companies.”

Bob Ward, policy director at the LSE’s Grantham Research Institute on Climate Change, told the newspaper: “It is not surprising to find such strong links with a right-wing lobby group, the IEA, which also promotes climate change denial. It is now crystal clear that the campaign by the GWPF against the UK government’s climate change policies is driven by right-wing ideological zeal rather than evidence-based reason.”

DeSmog UK intends to publish the names of further Global Warming Policy Foundation funders ahead of the Conservative Party conference held in Birmingham from Sunday, September 28. The investigations website has invited Lawson to publish the full list in order to regain control of the agenda without success.

Posted by Mike Shaughnessy at 10:58