The Inside Story of Building the Ecosocialist Alliance 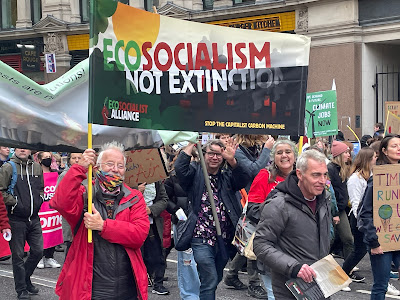 This post is based on and an updated version of a talk I gave to the Green Left meeting at the recent Green Party of England and Wales autumn conference.

Anything in the field of human endeavour, begins with an idea in someone’s mind, and the Ecosocialist Alliance was no different.

I’m a blogger, I edit the London Green Left Blog. The COP26 conference should have been last year, but was delayed because of the Covid pandemic. I wrote a piece basically saying even though the climate crisis had reached a critical point, I didn’t expect anything significant would emerge from the conference, whenever it happened.

This was the seed planted in my mind, which germinated into an idea - to have an ecosocialist response to COP26.

This got me to thinking, here was an important conference, happening in the UK, with the eyes of the world on us, where we had twelve months to organise a protest, and put forward ecosocialist solutions to remedy climate breakdown.

It would also be an opportunity to put ecosocialism firmly on the map of British politics. I thought it was probably a too big an ask for Green Left to do this alone, but would be feasible if we could join with other ecosocialist groups and individuals. The Ecosocialist Alliance would be open to all those who take an ecosocialist view.

This is true of course of ecosocialism itself. It will not be owned by any one political party or grouping, but a coming together of the like-minded political campaigning groups and individuals, which builds a mass following. Ecosocialism has the solutions to our ecological and social ills.

My first point of contact was with ex Green Left comrade, Allan Todd, now a member of Left Unity. I ran it past him. He thought it was a great idea, and we agreed that I would try and convince Green Left and he would do the same with Left Unity.

Then we would try to get others involved.

We were successful with Green Left and Left Unity agreeing to participate. I don’t think we would have got this on without Allan.

A series of weekly zoom meetings were arranged, between Green Left and Left Unity representatives. I had envisioned the alliance to be a UK thing only, but I wrote a blog piece, inviting interest, to what I called as a prototype a ‘United Ecosocialist Front for COP26'.

Later we changed the name because I thought it was too clunky, and bit Pythonesque.

It quickly became apparent to me though that there was an international dimension to this, so I got to thinking about how international comrades could participate in this alliance?

It is an international event after all, but in the middle of a pandemic!

I came up with the idea of releasing a public statement. I also found out that the G7 conference was going to be in the UK also, in June. This could be a trial run for us, so we worked on a statement to be issued to coincide with the G7 conference.

This had the added advantage of the statement being something tangible to announce the alliance, because at that stage, it was still largely an idea only. A contact email address was created.

We asked others in the UK and internationally to support the statement, and they did, in healthy numbers, from the UK and Ireland and the US and Canada, where I had contacts through my blogging and through the Global Ecosocialist Network, which Green Left had now joined.

We asked that supporters put it on their websites on the same day. We also arranged a public zoom meeting, which had attendees from the UK and US. The alliance was born.

At this stage, Anti-Capitalist Resistance joined the alliance, who had been working on actions themselves around COP26. They were invited to our planning meetings, and took on the role of organising a physical presence in Glasgow and London mainly, but other towns and cities in the UK, too. 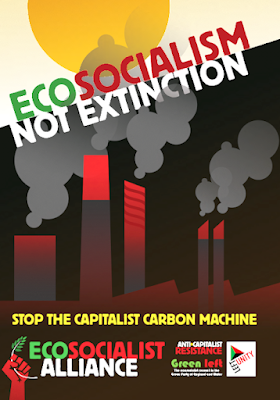 2000 newspapers were printed for distribution during COP26, and some at Green Party conference (front page pictured above).

And with special thanks to Rob Marsden, they did a very good job of it. Rob came up with our slogan ‘Ecosocialism not Extinction.’

We agreed to split the costs evenly three ways.

A statement was released on 24 October across many websites, after we had accepted an amendment from the Global Ecosocialist Network, which has support from many groups and individuals in the UK and internationally. From east to west it was supported by groups and individuals from Australia, South Korea, West Papua, Philippines, Iran, Sweden, Germany, Switzerland, France, Belgium, Netherlands, UK, Ireland, Peru, USA and Canada.

The Ecosocialist Alliance had a presence in Glasgow and London on 6 November on the COP26 Coalition demonstration, where our banner was proudly displayed (pictured at the top of this post, at the London demonstration).

Despite what the naysayers said, about the unhappy history of socialist unity projects in the UK, of which I was fully aware, the Ecosocialist Alliance has been a success, but it should be stressed that it has had goodwill from all those involved.

There has been a complete absence of any kind of sectarianism, unlike previous socialist unity project’s that I have been involved in, and that has been the key.

Although the alliance was only meant to be for COP26, we are considering continuing it, in some form or another. I hope we will, even if it is only on an ad hoc, campaigning basis.

Posted by Mike Shaughnessy at 03:04