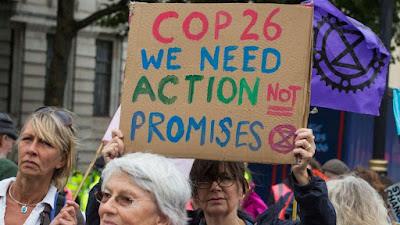 Dealing with climate change, the United Nations held its “Conference of the Parties”—COP26—in Glasgow Nov. 1-13. Unfortunately, nothing happened likely to slow down progression toward a catastrophic outcome. The nations failed to reach even a non-binding agreement on reducing fossil fuel emissions that disturb the climate. In the wake of the conference, the theme “system change not climate change” gains new relevance.

With smooth words obscuring a grim reality, a New York Times reporter described “a major agreement…calling on governments to return next year with stronger plans to curb their planet-warming emissions.” But then comes the admission: COP26 left “unresolved the crucial question of how much and how quickly each nation should cut its carbon dioxide and other greenhouse gases over the next decade.”

The conference’s hesitant approach originates from past difficulties in reaching collective and binding agreements. In recognition of such, the 2015 COP meeting ruled that henceforth nations need only submit goals for voluntarily reducing emissions.

The delegates at COP26 decided to renew a previous agreement, still unfulfilled, to provide poor nations with an inadequate $100 billion annually to assist them in “transition…recovery…and adaptation.” Rich nations were urged to double their funding by 2025. COP26 did not address phasing out coal production.

Prior to the gathering, publicity centered on “Keep 1.5 (degrees C) alive.” The slogan expressed determination not to allow dangerous levels of atmospheric warming to exceed 1.5°C above pre-industrial levels, as promised by the 2015 COP meeting. A conservative estimate foresees a 50% probability that, at the current rates of emissions, greenhouse house gases will spike to that level in just 15 years.

Climate scientists associated with the UN’s Intergovernmental Panel on Climate Change (IPCC) periodically issue Assessment Reports. Part I of the current version, reporting on the “physical science basis of climate change,” predicts that “Global warming of 1.5°C and 2°C will be exceeded during the 21st century.” Consensus exists that temperature elevations of the order of  3°C will lead to exponentially accelerating planetary changes that will be irreversible.

The dim prospect of nations and the international community mobilizing effectively has unsettled all quarters of society. References to short-sightedness, disregard for the truth, opportunism, and immorality are standard. What’s in order for the protection of humanity is a gigantic rising-up of the concerned and afflicted, but it’s not on the horizon.

The movement already in place for applying ecological principles to the protection of nature has promise, though. For decades, there’s been theorizing, experimentation, and agitation for environmental sustainability. But these efforts have taken place predominately in well-resourced northern regions of the world.

Meanwhile, masses of people, everywhere, but mainly in poor regions of the world, are fearful, hurting, and/or dying. Clearly, they would be protagonists in a prospective movement for the survival of humans and all living things. Just as certainly, the specter of the mass mobilization that is needed would elicit reaction from the entitled classes.

Young people worldwide have organized, demonstrated, and spoken out. They protested at COP26. Interviewed, they project anger and commitment, but also despair and discouragement. Young people in the Global South are experienced in mobilizing against their political and ruling classes. In the United States, their affinity for the Bernie Sanders campaigns and attitudes expressed in opinion surveys show a new orientation towards socialism.

No wonder: U.S. young people face debts, fears, a deteriorating climate, and politics that look to be non-functional.

The U.S. response to climate change differentiates according to social class. Journalist and geologist Julia Rosen suggests that “climate change could bring welcome warming and extended growing seasons to the upper Midwest, Canada, the Nordic countries, and Russia.” Rosen adds that “Even within wealthy countries, the poor and marginalized will suffer the most.”

With their money, properties, and connections, well-to-do people in rich countries could wall themselves off from turmoil and victims. New arrivals escaping from homelands undone by desertification, drought, floods, and food shortages might find themselves rejected, stigmatized, and even manipulated—as pawns for dividing native-born workers.

The main class divide occasioned by the climate crisis shows up in the difference between rich, industrialized nations and the poor, historically exploited regions of the world. The industrialized G20 nations have produced 80% of greenhouse gas emissions.

At COP26, strong voices highlighted the predicament of peoples up against rising sea waters, the near impossibility of producing food, and/or intermittently intolerable heat. COP26 was silent on hearing vigorous demands for reparations, expressed as “loss and damage.”

Bangladeshi climate scientist Saleemul Huq offered reflections: “The most vulnerable communities in the most vulnerable countries…get just 2% of that global funding to tackle climate change…. This social injustice is a problem that rich people have caused. Every religion teaches us to be fair and moral—and that it’s immoral to hurt the poor.”

The IPCC scientists provide corroboration. Parts II and III of their current Assessment Report won’t be released until early 2022. One is about impacts, the other mitigation. Key parts of each have been leaked.

A section of a Monthly Review summary of Part II states that “We need transformational change operating on processes and behaviors at all levels: individual, communities, business, institutions, and governments. We must redefine our way of life and consumption.”

Part III calls for a “turn to demand-side strategies, exploring cutbacks in energy use and across all economic sectors, as well as aggressively pursuing conservation and low-energy paths.” Quoted, the IPCC scientists assert that, “The character of social and economic development produced by the nature of capitalist society [is]…ultimately unsustainable.”

The scientists would alter capitalism’s basic assumptions. Do they want to get rid of capitalism? Maybe not yet. They are following the lead marked out almost 30 years ago by the visionary Marxist scholar Kenneth Neill Cameron. In his book Marxism, a Living Science (International Publishers, 1993), Cameron foresees “a world racked by natural disasters of social origin,” involving the climate. He notes that “there is only one way known to slow down and then eliminate these disasters, namely by phasing out the gases that cause them.”

Options for action exist. Progressives, socialists, ecosocialists, Marxists—a whole range of democratic forces—envision tasks that, together, are essential for sustaining humanity, protecting the climate, dealing with the environmental crisis, and building a massive, people-centered political movement.

Multifaceted programs in this vein often referred to as a Green New Deal, are outlined in Mark Brodine’s book Green Strategy, in John Molyneux’s article in Climate & Capitalism, and in a report by Sean Sweeney in New Economic Forum.

A complicating factor is that capitalists aren’t the only parties potentially inconvenienced by climate-friendly proposals for cutting back on production capacities and consumer spending. Working people under capitalism, dependent on selling their labor, crave economic stability and predictability. For them, meddling with capitalism for the sake of the climate might be disconcerting and weaken their enthusiasm for all-out climate repair.

That endeavor, if or when it proceeds, would likely carry with it the appendage of a Red Scare. Old outbursts would reappear, like “Better dead than red!” For that one, perhaps it will be updated to: “Better they die than we are red.”

W.T. Whitney Jr. is a political journalist whose focus is on Latin America, health care, and anti-racism. A Cuba solidarity activist, he formerly worked as a pediatrician, lives in rural Maine.

Posted by Mike Shaughnessy at 07:45