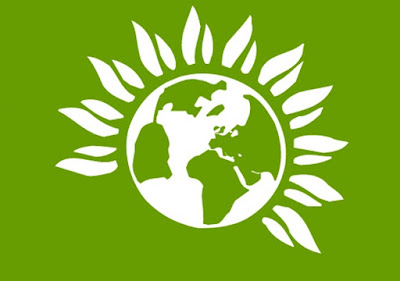 How does (or doesn’t) antisemitism relate to anti-Israel criticism?  For this political question, a central focus has been the IHRA Definition of Antisemitism.  Since being adopted by the UK government in 2016, it has become increasingly contentious.

The IHRA Definition likewise has been the focus of debate in the Green Party of England and Wales (GPEW) for several years.  Finally its autumn 2021 conference passed a motion on antisemitism guidance. Its text incorporated contradictory definitions of antisemitism, as highlighted by plenary speeches against the motion. Likewise by reports on the plenary debate from within and outside the GPEW.

Why such contradictory elements?  Together these serve the fantasy parallel universe of the motion’s supporters. According to them, there is no conflict between the IHRA Definition and the Palestine solidarity movement. This narrative helped the motion to gain a 2/3 majority vote at the conference plenary.  Yet the motion got a hostile response from pro-Israel groups.  Let us examine why.

On the one hand, the motion promoted the IHRA Definition as the ‘gold standard’ for mainstream Jewish organizations. Indeed it is, because they identify with Israel and seek to limit or restrict anti-racist criticism.  According to the IHRA’s Israel examples, it is antisemitic to characterise the Israeli state as ‘a racist endeavour’.  Deploying this example, pro-Israel groups have stigmatised the phrase ‘apartheid Israel’ as antisemitic.

The IHRA’s Israel examples underlie some false allegations against Green Party election candidates by pro-Israel groups, especially the so-called ‘Campaign Against Antisemitism’.  More generally, the IHRA’s Israel examples have been designed and used for an anti-Palestinian agenda; this role has been well documented for several years (as in the global survey, The IHRA at Work).

On the other hand, the conference motion gives reassurance that its guidance does not conflict with the GPEW’s policies on Boycott, Divestment, Sanctions (BDS) (in 2008 and 2014 conference motions supporting the 2005 Palestinian call).  The motion’s Appendix 2 includes caveats, e.g. that it would not necessarily be antisemitic to call Israel ‘an apartheid state’.  And it includes the Jerusalem Declaration on Antisemitism (JDA), which distinguishes between antisemitic and anti-Zionist comments, thus explicitly contradicting the IHRA’s Israel examples.

For those reasons, the motion displeased pro-Israel voices, such as the Board of Deputies of British Jews and some Jewish newspapers.  Such voices have had a central role in false allegations of antisemitism, thus helping to shield and disguise a wider UK-Israel partnership (see my article).  For such false allegations, the GPEW motion-guidance provides a weaker political weapon than the IHRA Definition per se.  Hence they predictably criticised the motion.

Those criticisms disappointed the motion’s proponents. Soon after the autumn conference, the Jewish Greens issued a briefing document for any GPEW representatives who may be asked questions about ‘the pushback from the Jewish community’ (more accurately, its pro-Israel sections).  The briefing attributes the pushback to a miscommunication.  It also says that the conference motion was ‘inspired by a model used by the Community Security Trust (CST)’.  Yet the CST’s 2019 report makes allegations of antisemitism against some individuals using the phrase ‘apartheid Israel’.

The Jewish Greens’ briefing document downplays the motion’s contradictory content and caveats about anti-Israel criticism.  It makes several requests, e.g. ‘Do not: Suggest that the reason we’ve taken this approach is because the IHRA is inadequate or use language which suggests we are caveating the IHRA.’   Indeed, please don't say the obvious.

For a consistently pro-Palestine politics that also opposes antisemitism,  the Jerusalem Declaration on Antisemitism is the most helpful short guide.  It should be deployed against the IHRA’s Israel examples, as it was explicitly meant to do. Political education should highlight their contrary perspectives. This is crucial for distinguishing between anti-racist Palestine solidarity and antisemitism, as a basis to counter false allegations.

Les Levidow is a member of Green Left within the Green Party of England and Wales. He has been involved in several Palestine solidarity groups since the 1980s, most recently Jewish Network for Palestine (JNP).  He is a member of the British Committee for the Universities of Palestine (BRICUP), which opposed the IHRA Definition’s precursor when it first appeared publicly in 2006.

Posted by Mike Shaughnessy at 05:36