Ecosocialist Alliance Calls on G7 for a Just Transition 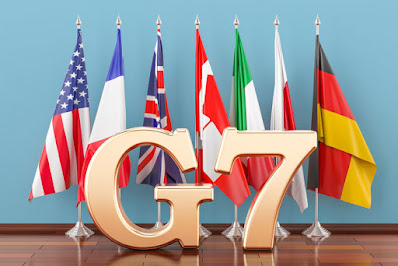 On this, World Environment Day (BST), an Ecosocialist Alliance has released a public statement (reproduced below), ahead of the G7 conference, calling on the leaders of those nations, for a Just Transition away from social inequality and the ecological crisis. The G7 conference is from 11 to 13 June, in Cornwall, England. Ecosocialist organisations and individuals from the UK and other countries have signed up to the statement.

This is the effective launch of a campaign begun by ecosocialist activists in the UK, which will see other actions taken in the lead up to the COP26 Climate Conference, in November later this year in Glasgow, Scotland. The statement will be released by the signatory groups on their websites and social media today (5 June).

The Ecosocialist Alliance will make the case for ecosocialist solutions to the economic recovery and ecological crisis, publicly, in the months ahead, leading up to the COP26 conference of world leaders.

Many groups will protest at G7 and COP26, and be asking for similar things, and we join with them in this. But in what is, I think, the first of a kind for a growing world ecosocialist movement, we will promote an explicitly ecosocialist agenda.

There is an email address at the end of the statement, to use if you would like to add your support, and to receive details of future actions, including a public Zoom meeting on 9 June, at 19:00 hours (BST).

Canada, France, Germany, Italy, Japan, the UK and the US (and the EU) have a great part of the immense wealth of the richest countries in the world in 2021. This wealth is more than sufficient to provide for the needs for food, water, health, housing and education of the global population.

We face multiple interlinked and inseparable crises. Climate, environment, mass extinctions, emergent infectious diseases and economic. Oligarchic ownership of industry and the transnational corporations are key contributors to environmental degradation and to emergent infectious diseases crises. They are inimical and a core barrier to the urgent measures needed to address the nested crises we face.

The world and its population need system change, a just ecosocialist transition from the unsustainable chaos of neo-liberal capitalism.

We call upon the G7 nations to agree a plan in preparation for the COP26 meeting in November this year:

On the Covid-19 pandemic and emergent infectious disease crisis to:

· Immediately introduce a patent waiver for Covid-19 vaccines that would allow countries to manufacture treatments locally, fully fund COVAX, and set up an aid fund to help with vaccine manufacturing, research and development.

· Increase funding to the WHO.

On the Climate Crisis:

· Agree that fossil fuels must stay in the ground – (no new coal mine in west Cumbria, UK) – We need a massive global program of green public works investing in green jobs to develop renewable energy, replace harmful technology reliant on fossil fuel energy in homes, industry and agriculture, with free technology transfer for developing countries.

· Recognise the particular impacts of the long-term global crisis and the knock-on effects on the localised catastrophic events on women, children, elders and disabled people – catastrophe climate events and sea level rises produce the casualties of the event, but the victims are the result of systematic abuse, discrimination, and failure of governmental and corporate responsibility.

On the environment and mass extinction crises:

· Move away from massive factory farms and large scale monoculture agribusiness as a method of producing food and support small farmers and eco-friendly farming methods, and invest in green agricultural technology to reduce synthetic fertiliser and pesticide use in agriculture, replacing these with organic methods.

· End deforestation in the tropical and boreal forests by reducing demand in G7 countries for food, timber and biofuel imports.

· End food and nutrition insecurity for small farmers in the global south by promoting an agricultural system based on human rights and food sovereignty through giving local control over natural resources, seeds, land, water, forests and knowledge and technology.

· Commit to a massive increase in protected areas for biodiversity conservation, both in the G7 countries and make funding and support available to do this in the global south.

· To recognise that migration is already and will increasingly be driven by long term environmental change and degradation resulting from climate change, driven primarily by the historic emissions of the metropolitan countries of the global north – accommodating and supporting free movement of people must be a core policy and necessary part of planning for the future.

On the Economic Crisis:

· Increase wages and cut working hours for all G7 workers and involve trade unions in the economic transition without any loss of living standards, and to allow for greater worker involvement in workplace safety and resilience.

· Outlaw tax havens, so wealthy corporations and individuals pay their fair share to the economic recovery. The economic costs of the pandemic should not be borne by those least able to do so.

· Cancel all international debt of the global south.

· Provide resources for popular education and involvement in implementing and enhancing a just transition.

If groups/individuals would like to add their name to this statement please email eco-socialist-action@protonmail.com, stating your country of residence. You can also get details of our future actions including our public Zoom meeting on 9 June, 19:00 hours (BST).

Posted by Mike Shaughnessy at 15:37