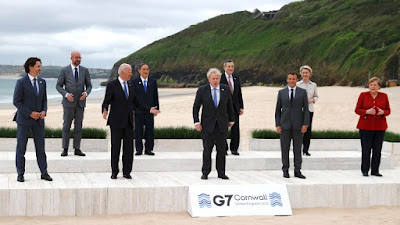 This is a transcript of my introduction to the Ecosocialist Alliance Meeting on G7 – 9 June 2021. The recording of the meeting will be released once some technical problems have been corrected.

The statement itself can be read here.

This ecosocialist campaign, in the run up to the COP26 climate conference later this year, began with our G7 statement released on Saturday.

But we have been talking to comrades from different groups for months. First in the UK and then in other countries – the movement has grown to 12 groups now and many individuals.

This meeting will be recorded and shared around our collective.

In August we will have a presence at the Wigan Diggers Festival and in September/October we are planning to hold an ecosocialist conference – all pandemic permitting - and we invite ideas for other actions as we approach COP26 in November, where if possible we will have presence.

that rich neo-liberal club – of which the leaders will start jetting into Newquay airport in Cornwall tomorrow evening – for a fancy dinner or such like – ahead of the conference itself – are the very nations that have largely caused the dual crisis of ecological disaster and gross inequality in wealth.

What can we expect from these leaders?

Why should the G7 corporations – with all their wealth – pay less than me?

We can expect more of these piecemeal at best announcements – nothing that will upset the prevailing status quo will emerge from the conference.

At the same time, these countries are hoarding vaccines in the midst of a pandemic – more than they need - which has seen many thousands, probably millions of deaths around the world, from the Covid 19 virus.

We see the warnings from scientists almost on daily basis – of devasting climate change approaching.

But what largely goes unreported is that it is capitalism’s unquenchable demand for endless growth in producing often useless things – to make profits for the capitalist class – that is driving these dangerous ecological changes.

The demands that the Ecosocialist Alliance have put forward – in our open statement – are, we think, quite reasonable – modest even – but they have virtually no chance of being adopted by the G7 nations.

It is aimed at the people, the general public of the world. Getting them to agree with our analysis is the only hope we have of forcing the hand of these governments – to do the right thing – by the people and the planet.

There will be many groups who will make similar demands of the G7 conference and COP26  – and we will join with them in this.

But the idea of this alliance – is to promote an ecosocialist analysis of our global problem – and put forward ecosocialist solutions to the problem.

And I say problem in the singular – because we know, as ecosocialists, that the root cause of all our social and ecological ills – is the dominant world economic system of Capitalism.

Only when capitalism is replaced with a more rational economic system – ecosocialism – do we stand any possibly of avoiding disaster.

We demand a Just Transition to a fairer, more sustainable world – before it is too late.

We hope you enjoy this meeting – and when it is over, you go back to your communities and talk to people, think about how we can grow this movement. We need to make a very loud noise indeed.

Posted by Mike Shaughnessy at 06:56