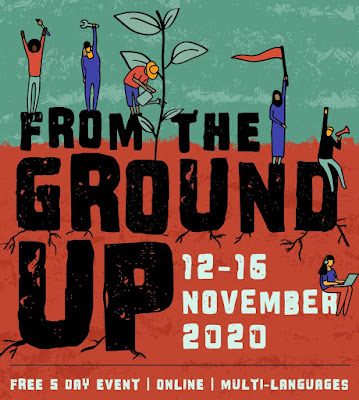 Written by Iain Bruce and first published at International Viewpoint

The surprising success of the online mobilisation, “From the Ground Up”, from 12-16 November, poses new challenges and new responsibilities for the climate movement. This “Global Gathering for Climate Justice” was organised by the COP26 Coalition to mark the time when the United Nations climate talks were meant to have taken place in Glasgow. [1]

Lasting five days with 53 events and some 8,000 people registered, it brought together an impressive range of movements, speakers and topics. Together they sketched out key components of the response that is needed to the climate and Covid crisis – not only in the next year leading up to the postponed COP26 in Glasgow, but beyond that across the coming decade, when drastic action is needed to keep the global temperature rise below 1.5 degrees Celsius.

With Via Campesina and small farmers from South East Asia and South Africa to the Western Isles of Scotland, activists discussed the need to replace industrial agriculture with local, agroecological production as a way of getting food on our plates. Indigenous activists from Central America and the Amazon to Sulawesi talked about the struggle to defend their forests and lands from extractive industries, including the important issue of mining the minerals needed for electric motors.

Oil and aviation workers, from the North Sea to the South Atlantic, debated alongside public transport campaigners from Glasgow and retrofitters from Leeds the need for a just transition to climate jobs that really responds to, and is steered by, the workers concerned. Feminist and Black Lives Matter activists from North and South America talked about the overlap between their mass protests and the climate struggle.

Veronica Gago, of the Ni Una Menos movement in Argentina, said we need to go beyond solidarity, and think in terms of building bridges between the different actions we take, wherever we are. One of the main leaders of the October 2019 uprising in Ecuador, the Indigenous leader Leonidas Iza, called for the climate movement, the feminist movement and the youth movement to agree on a worldwide uprising next year in the run up to Glasgow, “because capitalism threatens the end of humanity”.

If anyone thought the pandemic had silenced the climate movement, this event should have set them straight. It showed that this movement is now a key site where concerns, anger and proposals over the combined climate, health and economic crises are coming together. The British government under Boris Johnson, reflecting the consequences of the election of Joe Biden in the US, is now seeking to relaunch its image with burnished green credentials. The movement around COP26 has the potential to become a strong counter pole to this promotion of “Green Capitalism”.

The COP26 Coalition issued an important second political statement a day before the event which acknowledged that the fact so many governments and corporations are talking about getting rid of fossil fuels is itself a victory for the years of street protests and resistance by front line communities. [2] But the movement should not trust these elites to follow through. The statement was signed by dozens of organisations within the Coalition and stated:

The global pandemic has made clear that the multiple crises we face today – climate breakdown, ecological destruction, racism, patriarchy, hunger, poverty, the mass displacement of peoples – are all interconnected. These crises share common roots that see the earth’s resources exploited for the benefit of the few at the cost of the many, and the poor and marginalised bear the worst consequences. We may all be in the midst of the same storm, but we are patently not all in the same boat.

This was the message taken into the centre of Glasgow on the second day of the event, as activists sailed a boat, decked in banners reading “Same Storm, Different Boats”, down the River Clyde to the Scottish Events Campus where the COP will take place. [3]

Standing next to the boat, the Coalition’s Scottish Coordinator, Quan Nguyen, said: “We need the UK and Scottish Governments to acknowledge that their targets of net zero 2045 and 2050 are not only too late, but open loopholes for fossil fuel corporations who have caused the crisis in the first place to continue polluting and burning the planet... The Governments need to hold polluters to account, shut down fossil fuel corporations and fossil fuel sites. They need to stop exporting fossil fuel technology, and start paying reparations to countries and communities in the Global South.”

To some extent, the From the Ground Up event showed that the movement around the COP26 Coalition has already broken beyond the NGO framework that gave rise to it. Those taking part are mainly young, probably more women than men, and fairly diverse, although this is an area it certainly wants to develop further. The tone is militant, and the content largely anti-capitalist, even if not everyone wants to use that kind of language. And it is resolutely internationalist.

It may have been a blessing in disguise that the big figures of the environmental movement – Greta Thunberg, Naomi Klein, AOC – couldn’t make it. Their absence reinforced the sensation of a broad, horizontal, mass movement, reemerging from within the lockdown.

Big challenges certainly lie ahead. Sustaining the momentum and building on it will be one of them.

In the short term, there is the governmental Climate Ambition Summit on 12 December, which the Johnson government is organising together with the UN, France, Italy and Chile, to mark five years since the conclusion of the Paris Agreement. From the Coalition and the wider climate movement, we need to make our presence felt and raise those big questions about the promises being made, and the assumptions behind them.

In March there may be another, shorter online event of the Coalition, to talk more about strategies for action. In particular, plans will have to to be developed for the kinds of protest that are needed at the G7 summit to be hosted somewhere in the UK in the summer 2021, and leading up to the COP itself in Glasgow 1-11 November 2021. The Glasgow COP will be preceded by a UN pre-summit in Milan, Italy 30 September – 2 October, and earlier preparatory talks, possibly in Bonn, Germany, at dates that are still to be decided.

So these could also become targets for protests. But even if all these meetings do become physical events, and even if social distancing is no longer a necessity by November, it is likely that the plans for the Glasgow COP will aim at decentralised activities – maybe culminating in a big event and protest in Glasgow itself in November 2021, combined with rolling protests in other parts of the world, and maybe online convergences too. The Fridays for the Future movement of schoolchildren striking for climate action has shown the possibility of wider action by workers through strike and protest action in workplaces.

Scottish politics are going to intersect with the run up to COP too. The demand for good, green jobs to build out of the pandemic will only grow, as Scotland likely becomes one of the parts of Europe worst hit by unemployment in 2021. The devolved Scottish government’s record on climate action so far has been one of the weakest points of its governing party, the Scottish National Party (SNP). But if, as seems almost certain, the SNP wins a majority in next May’s elections to the Scottish parliament or an overwhelming majority in alliance with the Scottish Green Party, the swelling support for independence and a new referendum will reach a crescendo.

That means the months leading up to COP26 could well see a full-blown constitutional crisis of the British state, pitting the official hosts, the UK government of Boris Johnson, against the de-facto local hosts in the Scottish government, Glasgow City Council and the people of the city and Scotland. On the ground, Independence will be the big political issue of the day. Many in the Scottish climate movement have already taken a position in favour of this. But how this works out in the wider British movement could be more complicated.

Some absences from the movement

There remain some absences in the COP movement that ought to be addressed. Although the strong presence of the Global South was one of the most impressive aspects of this online gathering, it was uneven. The participation from Africa was weaker. So was that from East Asia, to some extent South Asia, and the Middle East. More surprisingly perhaps, mainland European climate movements were largely absent. The questions over EU climate policy are ones that need to be taken very seriously at COP26, especially if the extreme centre around Biden seeks to team up with the EU elites to reassert their hegemony.

Another relative absence has been that of the radical left, both in Scotland and more widely across Britain. This is not so much a problem for the climate movement as it is for the left itself. Individuals of course took part. A few of the environmental campaigns have left-wing activists centrally involved.

But there was little sense of a political contribution or exchange, much less symbiosis, at least in any positive, organised way. There may be good reasons for this, historical, generational, cultural. But they ought to be addressed, sensitively, and in the first place by the left itself, with a reorientation towards an ecosocialist perspective. Fortunately, these gaps seem to exist far less, if at all, in the Global South.

“A fundamental reckoning with and transformation of our economic, social, and political systems”

In the end, the central message of this reemerging climate movement is one that is, or should be, shared by the left as a whole, and well beyond too. In the words of that Coalition statement [4]:

We are in uncharted waters. The world is on track to breach the carbon budget for 1.5oC global warming well before 2030. Our role in the run-up to COP26 must be to maintain at the forefront of public consciousness what this warming of 1.5oC means: for our lives and for our livelihoods, for the interests of all citizens globally and for the future of our planetary ecosystem. And what it would take to avoid: nothing less than a fundamental reckoning with and transformation of our economic, social, and political systems.

[3] See COP 26 Coalition “All Hands on Deck – From the Ground Up Press Release”.

Iain Bruce is a journalist and eco-socialist activist living in Glasgow. He was formerly Latin America correspondent for IVP. He is author of “The Porto Alegre Alternative: Direct Democracy in Action” (IIRE - International Institute for Research and Education).