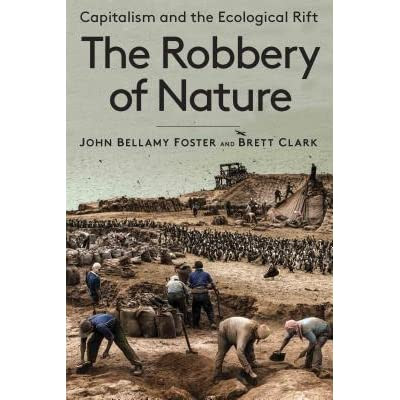 New Year’s Eve 2019: 5,000 people on the beach at Mallacoota, Victoria, watch pitch-black skies turn a deep red as the bushfire approaches. They huddle, powerless against the fury of this climate change-fuelled nightmare. By March 2020, 33 people, one billion animals, 3,094 houses and over 17 million hectares of land had been destroyed in fires across Australia.1

June 2020: Coronavirus, a predictable product of industrial agriculture and deforestation pushing humans into the remaining reservoirs of wildlife, has killed over half a million people as we go to press, and the situation continues to escalate. Experts warn future pandemics are likely to increase in seriousness as environmental destruction worsens.

The scale and consequences of planetary destruction demand that we understand the ecological crisis and its roots.

The Robbery of Nature: Capitalism and the ecological rift is a valuable contribution to this end. John Bellamy Foster and Brett Clark argue for a fundamental transformation of society based on workers’ control, and against the false solutions of green capitalism or hyper-technical state capitalism: “Ecological Marxism offers an opening up of humanity as a whole to creativity… to rebuild its world on ecological foundations in line with the earth itself” (p286). The serious application of Marx and Engels’ historical materialism to wide-ranging but interlinked environmental issues makes this analytical volume a rewarding read.

The book’s 11 chapters both defend and apply Marx and Engels’ ecological thought. The authors respond to a range of historic and contemporary critiques and provide the reader with an opportunity to engage with Marxist understanding of nature from a number of angles.

Marx saw ecological destruction and that of humanity as intimately linked, as humans are both part of the natural world and rely on it for our survival. Capitalists expropriated the land, through brutal colonisation abroad and enclosures of peasant land in Britain. They ripped humanity from its natural connection with the land by creating private property from nature, and creating alienated human relations with the material world.

Capitalism involves “the exploitation and squandering of the powers of the earth”, just as it “squanders human beings… not only flesh and blood but nerves and brains as well” (cited on pp46-48). Whereas previously those who worked or lived from the earth were able to replenish it, capitalism introduced a “metabolic rift”.2 Separation of town and country ruptured the historic process of returning nutrients to the soil, and demands on ecological systems increase as the needs of capitalism are imposed on nature.

The book’s opening chapters focus on the two equally monstrous pivots of English modern industry – the import of potatoes from Ireland and slave-grown cotton.

Rack renting, the Irish land tenure system named after an instrument of torture, led to soil degradation and monoculture crops, making the country vulnerable to potato blight which struck from 1845-1849. While one million Irish died and a million more emigrated, the British continued the export of grain from Ireland: “Ireland was the site of an extreme metabolic rift, caught in the vice grip of economic and ecological imperialism, from which arose the necessity of ‘ruin or revolution’” (pp72-77).

The triangular slave trade involved layers of robbery which enriched British capital. Humans were brutally stolen from Africa. Soil fertility, enriched by millennia of care by indigenous custodians, was also looted, exported as cotton fibre thousands of miles to England. The cotton industry rested on a “twofold slavery, the indirect slavery of the white man in England and the direct slavery of the black men on the other side of the Atlantic” (cited on p50).

Robbery is at the centre of capital accumulation.

Marx’s ecology is inextricable from his social and economic analysis. The central section of the book demonstrates how environmental destruction is built into all facets of capitalism and how Marx and Engels’ theories apply equally to modern issues. Certain chapters are unnecessarily academic, however the authors present Marx and Engels writing on a useful spectrum of topics. It is impossible in an article of this length to address each chapter, so just those on work, food, and wealth are addressed.

Revulsion towards work is not a constant feature of human society, but a product of the alienated organisation of labour under capitalism which makes work degrading, meaningless, destructive, and dehumanising (pp188-189). Certain sustainability theorists focus on expanding leisure and shunning work, arguing for a no-growth society. By contrast, the authors argue that while we must reject destructive work, “the real potential for any future sustainable society rests… on its capacity to generate a new world of creative and collective work, controlled by the associated producers [workers]” (p174).

Marx’s labour theory of value has given rise to the accusation that he perceived non-human nature as valueless. Yet it is capitalist logic that uses nature as a “free gift”, as Marx observed. “Labour is not the source of all wealth. Nature is just as much the source of use values… as is labour, which is… the manifestation of a natural force, human labour power” (p163). For capital, labour in extracting and processing makes natural resources marketable.

It is no solution to put a dollar value on natural resources, as some environmentalists recommend. A truly perverse element of capitalism is that it feeds on scarcity, thus planetary destruction can open up new markets, monetising products which were once freely available in abundance. Gerard Mestrallet, CEO of global water corporation Suez, stated: “Water is an efficient product. It is a product which would normally be free, and our job is to sell it. But it is a product which is absolutely necessary for life” (p170).

“Food… is only of passing interest to Marx”, asserted the 1992 book The Sociology of Food (p104). In fact, Marx was already grappling with the problems surrounding food in the 1850s. Chapter 4 charts Marx and Engels’ study of the production, distribution and consumption of food. It encompasses agricultural development under different modes of production, soil chemistry, industrial agriculture, livestock conditions, food adulteration, climate, food production technology and much more.

Their interest in food makes sense: a materialist conception of history is centred on humans as beings who must, before all else, produce the essentials – food, water, shelter etc. Capitalism makes a commodity of this essential good.

In the final two chapters the authors outline the extent of the planetary crisis we face, and make a compelling case for the revolutionary potential of humanity to heal the rift with nature created under capitalism. “As bad as the climate crisis is… it is only a part of the larger global ecological crisis” along with ocean acidification, ozone layer destruction, biodiversity loss, freshwater shortages, pollution and others. The root cause of the ecological crisis lies in our socioeconomic system of capital accumulation (p244).

There are many who argue for substantial, but not revolutionary, changes to capitalism to combat ecological destruction.

Those who argued the coronavirus crisis was an opportunity for better climate outcomes are anti-human, but they’re also plain wrong. Common sense suggests financial crises would cause a sharp drop in carbon emissions. But data from 150 countries between 1960 and 2008 has comprehensively demonstrated that emissions don’t decline in the same proportion during downturns as they increase during growth.3 The system is not going to self-limit. The drive to accumulate continues, even in light of an unprecedented health and financial crisis caused in part by environmental destruction.

The most polemical section of the book is dedicated to a critique of the current which aligns socialism with ecomodernism. The authors choose the Jacobin special issue Earth, Wind and Fire as their focus, which includes pieces arguing for nuclear power as the alternative to fossil fuels, terraforming (reshaping the earth), geoengineering (such as cloud brightening), mass carbon capture and storage as technical solutions.

The Jacobin writers critique the environmental movement for “a politics of fearmongering and austerity” and urge the left to abandon the “aversion to ambitious technologies” and to love our monsters. “Green capitalists are the ones shaping the future”, so socialists should look to state management of technology, the market and urban development, together with progressive redistribution of resources.4 Their fundamental argument is that technological solutions are more realistic than, or preferable to, social revolution and workers’ power.

The authors rightly point out that the domination of nature does not represent a scientifically feasible, or desirable, solution to environmental devastation. There are much better and faster ways to address the climate crisis than unproven and resource-intensive technology like carbon capture and storage, which would almost certainly widen other ecological rifts (such as deforestation and biodiversity loss).

The current system is “built on waste. The [majority] of production is squandered… in such forms as military spending, marketing expenditures, and the inefficiencies, including planned obsolescence, built into every product” (p284). Thus drastic cuts in carbon emissions, pollution and wasted human labour are immediately possible through a revolution in social relations.

While their critique of the ecomodernists strikes true, the authors are on more shaky ground when they present their own solution to the crisis. They see the main impetus of environmental revolt in the “environmental proletariat”, which they hope may arise from La Via Campesina, a millions-strong international peasant movement (p259).

While agricultural workers and small landowners, particularly in the developing world, are materially driven to resist environmental destruction and are an important ally of any serious climate movement, a successful social revolution must centre on the industrial working class at the heart of capitalist production, who have the most power to bring the system to a halt.

The authors conclude: “To overcome centuries of alienation of nature and human labour, including the treatment of the global environment and most people – divided by class, gender, race and ethnicity – as mere objects of conquest, expropriation and exploitation, will require nothing less than a long ecological revolution…  occurring over centuries” (p287). The history of revolutions indicates a socialist society focused on improving human life could make great strides towards these goals in the first months and years, though not without enormous difficulties.

Though the authors do not suggest it themselves, their conception of revolution does not preclude reformist interpretations. This is a missed opportunity: the seriousness with which their works are read in the broad environmental movement means they are uniquely placed to make revolutionary arguments to wider audiences.

Overall, the urgency of the environmental crisis demands we recommit to, and deepen our understanding of, revolutionary politics and the connection between climate crisis and capitalism as a system. The Robbery of Nature is an excellent tool to help us do just that.

Posted by Mike Shaughnessy at 08:44