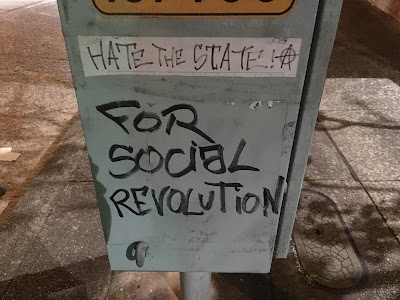 It is with respect to means, or transition strategy, that ecosocialism and my version of ecoanarchism differ most. This is because the kind of society that I argue must replace capitalism differs markedly from that which socialists commonly envisage.

Our previous piece sketched the argument that, in view of the grossly unsustainable state of industrial-affluent-consumer-capitalist society, the revolutionary goal must be a basic social form focused on small scale, highly self-sufficient and self-governing, collectivist and zero-growth communities. They have to be driven by need not profit, and have to abandon a culture focused on individualism, competition and acquisitiveness.

The Simpler Way, and then converting or forcing uncomprehending masses to it. This is hardly worth discussion.

The second path would be via the election to government of a party which had a Simpler Way platform. But that could not happen unless the cultural revolution for a Simpler Way had previously been achieved! If/when it had, changing structures would be a relatively easy consequence of the real revolution. So there’s your focal task here and now, that is, establishing the required worldview, not trying to take state power.

Peter Kropotkin, Lev Nikolayevich Tolstoy and Mahatma Gandhi realized that culture trumps economics and politics. They saw the ultimate revolutionary goal as largely autonomous citizen-run village communities, and these cannot come into existence or function satisfactorily unless their members come to have the required vision, values and dispositions.

Standing Marx on his head

Thus, in a sense, Marx must be stood on his head; the necessary superstructures must be based on a cultural substructure of the right ideas and values. Especially given the current sustainability crisis, the change in ideas and values required for a good society cannot be left until well after the seizure of state power (Marx assumed they could be.) Socialists have the order of revolutionary events around the wrong way.

Important here is the strong case for believing that capitalism is well down the path to self-destruction. The coming disintegration will make it clear that the system will no longer provide for us, and that people will (have to) come across to the emerging local collectivism.

Thus, there is a head-on contradiction here regarding basic strategy. In past revolutions the solution was theoretically simple; take power from the ruling class and then turn up the throttles in the factories to provide more abundance for all.

But now that cannot be the solution. It must be to establish a society with a far smaller gross domestic product (GDP) per capita, without growth, affluence, centralisation, globalisation and, above all, a society driven by radically new ideas, values and dispositions.

Getting this utterly foreign culture sufficiently established is the primary revolutionary task. If and when that’s done, getting rid of what’s left of capitalism will probably be easy and non-violent.

Socialist transition efforts typically go into calling for state-level policy change, such as nationalising key industries, but they do not involve shifting to far simpler localized lifestyles and systems. More importantly, they do not recognize that nothing of much significance can be achieved unless we first bring about widespread and profound change in ideas and values.

What then is to be done? It is to, as anarchists say, prefigure — that is, to focus scarce energies on building aspects of the required alternative here and now.

Socialists usually misunderstand the point of this. It is not based on the assumption that if we just go on adding a community garden here and a poultry co-op there, in time we will have replaced the existing system.

The point of prefiguring is educational: it is to develop illustrative examples of aspects of the new society, and to use these as bases for undermining capitalist ideology. The best way to undermine it is not to fight it head on, but to get people to see: a) that it will not provide for us; and b) how good the ecoanarchist alternative to it could be.

There is now rapidly increasing adoption of this “turning away” and “ignoring capitalism to death” perspective, that is evident among the Zapatistas in Mexico, the Rojavan Kurds, the Transition Towns movement, the global ecovillage network and the 200-million strong campesino movement.

Possibly the most impressive is the Catalan Integral Cooperative, which now involves thousands in building alternative systems, emphatically rejecting having anything to do with the market or the state.

If these initiatives spread they will begin to pressure the existing state apparatus to focus on enabling the towns and suburbs to thrive and will, in time, increasingly push the state aside and transfer more functions into the anarchist political sphere in which federations, delegates and conferences work out proposals to be taken back down to the participatory town assemblies for decision. This would be a process of gradually taking state power.

Posted by Mike Shaughnessy at 08:29