Climate Crisis - Which Transitional Demands Should Ecosocialists Campaign For? 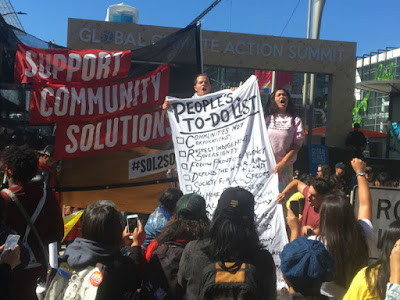 The concept of transitional demands will be familiar to traditional socialists, particularly those followers of Leon Trotsky’s theories of socialism, although, I hasten to add, Trotsky was no ecosocialist. These demands are designed to appear to sound reasonable to the average citizen, and not directly lead to the overthrow of capitalism, but instead to create a pathway to socialism. They are more than just asking for reforms to the capitalist system, although they would be reforms, but they are not ends in themselves.


Much as I would like to see the overthrow of the capitalist system, and as an ecosocialist, I believe that this is necessary if we are to solve the climate crisis and the many other bad effects, both ecological and social, that capitalism creates. But there just isn’t enough time left.

If we are brutally honest with ourselves, a revolution to replace capitalism with ecosocialism is not on the horizon, and the well-being of the earth and all those (human and non-human) who inhabit it are in such deep peril now, we really can’t afford to wait until those conditions arise, as they surely will at some stage. We need mitigating action now.

So, which sort of demands should ecosocialists be making? Given the urgency of the situation on climate change particularly, with the Intergovernmental Panel on Climate Change (IPCC) in its latest assessment saying that we need to cut carbon emissions by 45% by 2030, to avoid catastrophic changes to the environment, this is the main goal that we need to pursue. But not the only one.

The IPCC is infamously conservative in its estimates though, so I would suggest that we need to be more ambitious than the 45% reductions by 2030 recommended. A more effective target would be something like a 70% reduction within the same timeframe.

The symptoms of the ecological crisis are likely to be more: drought, floods, increasingly strong hurricanes, species loss, deforestation, rising sea levels, bleached coral reefs, ocean acidification and pollution of the air, land and sea, with plastic waste becoming an even greater problem than it is now.

The knock on effects that all of this will have on the earth’s delicate ecosystems is incalculable, but is likely to be severe, and maybe lead to the extinction of much of life on the planet, including human beings. The stakes are high.

A starting point for a transitional demand is the Green New Deal, which found favour first with Green Parties in the US and UK, and has now been a adopted in the UK by the Labour Party, and there are moves in the US for the Democratic Party to take the idea on board.

The exact nature of the plan may differ in the UK and US, especially if elements of the Democrats manage to water down proposals, but basically it calls for massive investment in a move to build renewable energy capacity and an equally massive programme of insulating homes and workplaces. The practice of carbon trading used in the European Union should be ended and replaced with real reductions, alongside the Green New Deal.

The Green New Deal, on its own, is not enough to get to where we need to be. Nevertheless, it would lead to a cut in the burning of fossil fuels, which is needed, with the added advantage of providing well paid employment, which is likely to gain the support of the public. As ecosocialists we know that if we are to be successful we need to take the people with us, and the Green New Deal has the potential to do this. 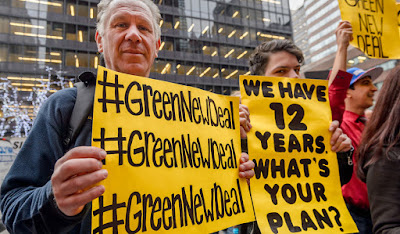 Our problems do not end with producing clean energy for homes and workplaces though, we need to tackle the carbon emissions from transport, specifically private cars and trucks, air transport and shipping. The solutions in this area will be most easily achieved by a kind of back to the future plan. With shipping for example, we need to return to using wind power together with solar power, and perhaps an emergency engine to be used only when strictly necessary. This could quite easily be done.

Aviation is more problematic in that simple solutions are not readily available, but a return to propeller planes, maybe electrically powered, could be used for all short haul flights, but long haul will need to be rationed, with more use, particularly by business of video conferencing. Airport expansion should be stopped completely. This is a more difficult sell, but with the environmental crisis worsening, can probably be achieved.

Cars and trucks can instead be electrically powered relatively easily, but it is doubtful enough power can be generated from renewable sources for the numbers of vehicles currently in use, so a massive public transit programme is needed to get people out of cars and onto public transport. Again an added advantage to this is it will provide jobs.

We also need to campaign against imperialist wars, where the US military in particular is a huge user of fossil fuels and the resultant carbon emissions that are produced. This, of course, is a big ask. I have campaigned myself for years against these imperialist interventions without success, but it has only been in more recent times that I've made the connection to climate change. Might that be a game changer, perhaps it will with our very existence at stake?

The problem of plastic pollution also has a solution from the past. The current vogue, if we can call it that, for recycling needs to be increased, but some plastics are unrecyclable. We need to use less, certainly of these types of plastics. In fairly recent times, such as my childhood, there wasn’t anywhere near the amount of packaging used. This needs to be reduced significantly, and deposit returnable glass bottles need to make a comeback. That plastics are made from oil or coal exacerbates this problem.

We need a massive reforestation effort, to enlarge habitats for wildlife and to take existing carbon out of the atmosphere. Farming should be returned to organic methods, and we should stop the use of pesticides which are over used at present. We need to eat much less meat, especially beef and dairy products, and fish, and to eat more vegetables and fruit. This would need to be voluntary though, as I can't see legislation on the issue working.

All of this has to be done on a global scale to have the required effect, and quickly, but is not that difficult to achieve, once the will is there, or forced to be there. These are eminently reasonable demands, but will it set us on a pathway to ecosocialism? I think it may well do so.

Even though this is all feasible, there will be resistance from the capitalists, at which point it will become obvious to most people that it is the system which is obstructing progress and therefore will increasingly be seen as the villain here. If they were to comply, it would be the beginning of the end for capitalism, because it needs ever increasing amounts of energy to fuel the growth it needs to survive, so they won’t.

Once this realisation dawns on the mass of the population who do not do so well out of the system anyway, we will have arrived at our revolutionary moment. It will be fertile ground for the toppling of the regime of capital and the move to ecosocialism. The logic of the system will be exposed, and logic of replacing it unstoppable, if we want a future worth living.