The Tory Party is Ripe for Entryism by the Alt-Right 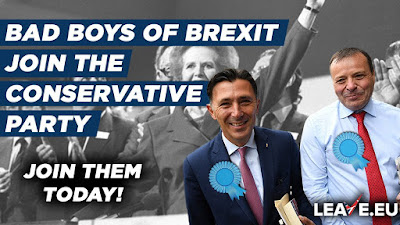 Throughout my political lifetime, the term ‘entryism’ has only ever been applied in relation to the Labour party being infiltrated by far-left organisations and individuals. In the 1970s and 1980s there were constant media stories about groups such as the Communist party and Militant Tendency taking over the Labour party. Which led to, particularly with Militant Tendency, so called ‘witch hunts’ and mass expulsions from Labour.

The familiar narrative has of course been played out recently with an influx of new members to the Labour party leading, in part anyway, to Jeremy Corbyn winning the leadership of the party, twice.

Faceless individuals were said to be ‘organising and exploiting’ naïve new, younger members for the purposes of pushing Labour to the ‘far-left.’ The truth of the matter is that these younger members were sick of the Tweedle Dum, Tweedle Dee routine of the Tories and new Labour, and wanted a more radical and fairer politics, from the Labour party especially. Corbyn represented an opportunity to achieve this aim.

This battle rages on in Labour, as the right-wing comes up with more ways of smearing Corbyn, the latest being the summer long campaign of anti-Semitism accusations. Out of the media spotlight though, an organised move to infiltrate the Tory party has been taking place. Encouraged by people like Aaron Banks, the multi-millionaire who previously bankrolled UKIP and its Leave.EU campaign group, ex UKIP members and assorted right-wing racists and Brexit fanatics have joined the Tories. Banks himself has apparently been refused membership by the Tory party.

Thursday’s London Evening Standard reveals that it ‘spoke to a number of Tory MPs who admitted that over the summer the memberships of local parties have increased by double figures. One in a South East constituency said membership had increased by about 30 members this summer. Another in the North said they had seen 20 to 30 people join.’

‘One Remain-backing MP said their membership has increased over the summer by double figures to over 200, and from meetings with their association executive they know that some people who have joined are hard Brexit entryists.’

Under Tory party rules you need to have been a member for at least three months to be eligible to vote, and with a strong possibility that there will be a leadership challenge to the prime minister, Theresa May, in the autumn, this may have been a well timed tactic. Recent reports, although the Tories have been unwilling to release figures, suggested that membership had fallen to under 100,000, perhaps as low as 75,000.

Which means that only a fraction of the membership surge that followed Corbyn’s candidature for the Labour leadership, could tip the Tories into alt-right mode. Existing Tory members were already moving in this direction in any case so it really wouldn’t take much to complete the process.

We have seen something similar in the US Republican party, with first the ‘tea party’ faction and then Donald Trump’s winning of the Republican nomination for president, and subsequent US presidency. Mainstream Republicans are being pushed to the margins as the combination of small government libertarians, the Christian right and racist organisations like the Ku Klux Klan, has captured the party.

With the UK Tories, even their pro-business ideology appears to be waning, and the old ‘one nation’ Tories are becoming an engendered species these days in the party. All that remains is a nasty patriotism and xenophobia, again as Goodman says, ‘the Conservative Party’s main problem isn’t being infiltrated by the wrong members. It is having too few of the right ones in the first place.’

The only people attracted to joining the Tories these days are exclusively from the far-right of the political spectrum.

Posted by Mike Shaughnessy at 10:43