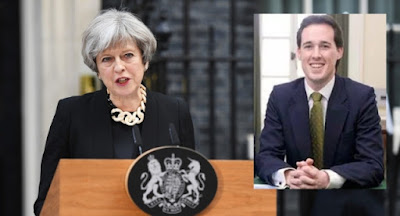 Defending her political secretary, Stephen Parkinson, in Parliament on Monday, the prime minister, when asked about the Brexit whistle-blower Shahmir Sanni, being outed as gay, by Parkinson, trotted out the most trite of replies.

Sanni, who is of Pakistani origin told the Guardian he had the “most awful weekends” after revealing details of the Vote Leave campaign getting around spending limits at the 2016 EU referendum. Money was channelled through a separate campaigning group BeLeave, who have links to Cambridge Analytica, the company accused of misusing personal data gathered by Facebook, for the referendum campaign. Sanni was forced to admit to his family still living in Pakistan that he is gay.

Being gay in Pakistan is a much bigger deal than in Britain, and this news could well endanger Sanni’s family. Why Parkinson decided to make public the fact he and Sanni had had an eighteen month relationship, is not entirely clear, but it certainly looks like an attempt to smear Sanni’s revelations in some way as unreliable.

In response to a question from Labour MP Ben Bradshaw, who highlighted the danger posed to Sanni and his family and concluded by saying:

“It’s a disgrace, prime minister, you need to do something about it.”

The prime minister intends to do nothing about it, it appears:

May said: “I of course recognise the importance of ensuring that we do recognise that for some being outed as gay is difficult because of their family circumstances. What I want to see is a world where everybody is able to be confident in their sexuality and doesn’t have to worry about such things.”

Well we all want to see that, but how is this going to be achieved? Not by mere wishful thinking that is for sure, or outing gay people with family connections outside the UK. Surely May bears some responsibility for what her political secretary puts into the public domain, especially on such a sensitive and potentially life threatening issue like this?

May seems completely incapable of thinking on her feet, and has become infamous for her robotic standard line responses to questions in Parliament and from journalists alike. I can’t ever really remember her giving a straight answer to a straight question, preferring instead to say something which is vacuous, often baffling and seemingly designed to put her audience to sleep.

I expect May’s defence of Parkinson, who worked at the Vote Leave campaign, where he met Sanni, like everything else May does, is designed to appease the hard Brexiters in her Cabinet and Parliamentary party. To sack Parkinson would likely stir unrest, amongst an increasingly worried Eurosceptic faction in the Tory party.

The accusations of breaking electoral law by Vote Leave and its association with the dubious behaviour, to say the least, of Cambridge Analytica threatens to undermine the legitimacy of the referendum result, and so to make it less likely that we will leave the EU. It does seem that almost everyday some news comes out that is unsupportive at best, and often quite damning about Brexit itself.

The wheels appear to be falling off the Brexit wagon, one by one, and there aren’t too many left now. Maybe, the momentum is with remaining in the EU now, or to take the softest of Brexits, anyway. Time will tell.

For this slide in public perception on Brexit to be used as a motive for possibly putting lives in danger is truly outrageous and disgraceful. What was the purpose of Parkinson outing Sanni? I can see no other motivation, other than to try and muddy the waters around the actions of the Vote Leave campaign. The fact we haven’t been offered a suitable explanation, from the prime minister or anyone else does lead people to draw their own conclusions.


Will you give us a straight answer to the question of why Sanni was outed for being gay, Mrs May? I won’t hold my breath, I don’t think May is likely to change the habit of a political lifetime, so you will have to make your own minds up.

Posted by Mike Shaughnessy at 10:06