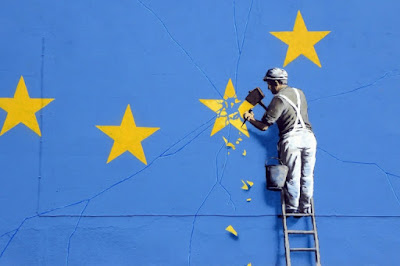 So far, debate on the model for the U.K.’s future relationship with the EU post Brexit has focused on two options — remaining close to the bloc and within the single market like Norway or agreeing a free-trade deal, like a souped-up version of the one the EU has with Canada.

But the European Parliament’s Brexit coordinator Guy Verhofstadt has put another option on the table, and after languishing for months without much traction it is now beginning to be taken seriously in both London and Brussels.

The potential third way is a so-called association agreement like the one the EU has with Ukraine and various other countries.

At a Parliament plenary debate in Strasbourg Tuesday, EU chief Brexit negotiator Michel Barnier declared that he was “quite comfortable with the framework you propose” — the first indication that negotiators in Brussels believe the idea has merit.

An official from Verhofstadt’s liberal ALDE party said the Council would “discuss the issue soon.” But he said the priority was for the EU and the U.K. to finalize the withdrawal agreement. “That’s what we’re all waiting for from the British side.”

Barnier was responding to the European Parliament’s Brexit resolution, which is expected to receive overwhelming support from MEPs in a vote Wednesday. The 13-page document — which was first published by POLITICO — recommends an association agreement as “an appropriate framework for the future relationship by which these common interests can be protected and promoted, including a new trade relationship.”

The document argues that such an overarching legal architecture would provide “a flexible framework allowing for varying degrees of cooperation across a wide variety of policy areas.”

In his speech to MEPs, Verhofstadt spoke about a single structure with four pillars including trade, foreign policy, internal security, and “thematic cooperation.”

“We create one overall governance structure and not an inflation of bilateral arrangements as we have in Switzerland,” he said. Switzerland is not part of the EU, but its economic and trade relations with the bloc are conducted through a series of specific individual agreements with the EU — an arrangement that Brussels is not enthusiastic about replicating with the U.K. once it leaves.

The EU has existing association agreements with varying degrees of closeness with a host of countries including Turkey, Israel, Georgia, Moldova, Morocco, Tunisia and even Syria (although that is currently on hold due to the civil war).

The idea has also gained traction in the U.K even though no existing association agreement could serve as a direct model. The framework is seen as allowing for a closer, more flexible and dynamic relationship after Brexit than that on offer from the Council — as expressed in its draft guidelines for the next phase of the negotiations.

These, for example, ruled out the possibility of the U.K. remaining part of EU regulatory bodies such as the European Medicines Agency.

But the Parliament’s resolution is less definitive on this point. “As a third country the U.K. cannot participate in or have access to EU agencies,” the Parliament wrote, adding: “However … this does not exclude cooperation in specific cases.”

Verhofstadt told MEPs he had discussed the idea of an association agreement with British Prime Minister Theresa May and Brexit Secretary David Davis on a recent visit to Downing Street and was confident that Britain “will see the advantages of such an approach.”

Barnier himself, while reacting positively to the proposal, made clear that he is keeping his options open — perhaps in the hope that May will be forced by the U.K. parliament into erasing one or both of her red lines on non-membership of the EU customs union and single market.

“All the models are still on the table,” he said. “They are available. We are open for business.”

At the Parliament, most MEPs backed the idea of an association agreement, saying the Parliament was the only institution to put forward a concrete proposal for the EU-U.K future relationship.

Weber was adamant that using an association agreement did not mean going easy on the U.K. — it is not an invitation to cherry-pick the best bits of EU membership. But he added: “The idea to cover the questions on the table in one framework, in one agreement, is, I think, an appropriate one, a good one.”

Responding to MEPs in the debate, Barnier declared that “It’s time to face up to hard facts.”

The zinger was delivered in English and, by borrowing one of May’s best lines from her Mansion House speech earlier this month, it was directed at London.

But although Barnier wants Britain to face up to the consequences of its Brexit choice, his warm reception for the Parliament’s association agreement proposal suggests that he is open to a way for both sides to claim a win in the Brexit talks.
Posted by Mike Shaughnessy at 09:58