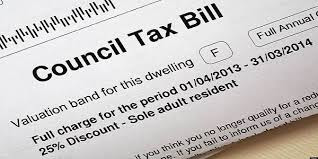 The Council Tax levels set by local authorities in 2018-19, in England, was released yesterday and has been published on the government’s website here. The main headlines are:

The biggest year-on-year rises of £86 are found in predominantly Conservative-run county councils.

The rise is the biggest annual increase for thirteen years.

Since the Tories came to power (in coalition with the Lib Dems) in 2010, local government has borne the brunt of public spending cuts. On average local authorities have had their funding from central government cut by more than half. Things like, libraries, leisure centres, community centres, local bus services, women’s refuges, children’s and adult social care services have been reduced or closed down completely.

Local authorities are by law required to produce balanced budgets each year, and inevitably with less money to spend, services need to be cut back. This is the reality these days in local government, it is all about reducing public expenditure, not providing the local services that their residents rely on. A library, a community centre or local bus service are competing for a reduced pot of money. Hard choices are being made by local politicians, there is no avoiding it.

Until last year, council tax rises were capped at below 2%, unless a local referendum voted in favour of a higher percentage increase. Few of these have been held, and none have been endorsed by the voters, unsurprisingly. People rarely vote to pay more in tax, and even those in favour of a rise, tend to be less motivated to vote than those opposed to a rise.

From last year, in addition to the 2% general rise in council tax, councils have been allowed to raise 3% more, which is ringfenced for spending on adult social care, without recourse to a referendum. This year the general rate can be raised by up to 3%, without a referendum. Local authorities have been quick to make use of the higher rates, as the government’s release confirms.

A National Audit Office report earlier this month said the finances of many local authorities  were unsustainable in the long term, with one in ten councils providing social care responsibilities vulnerable to insolvency because of rising demand and shrinking financial resources. Northamptonshire County Council has already gone bust, with local Tory MPs blaming the local Tory council and the council blaming central government cuts.

The fastest rising cost to local authorities is in the area of adult social care, which is why the government has allowed extra specific council tax rises to try to plug the funding gap. The £538 million that will be raised this year from the extra 3% rate rise is a fraction of what is needed though. The Local Government Association (LGA) called on the chancellor, prior to last Autumn’s budget, to fund what they say is a £5.3 billion funding shortfall in adult social care provision.

Lord Porter, the Tory chair of the LGA commented on the government figures:

“The need for adequate funding for local government is urgent. We have repeatedly warned of the serious consequences of funding pressures facing services caring for the elderly and disabled, protecting children and tackling homelessness for the people that rely on them and the financial sustainability of other services councils provide.”

That sums up the situation pretty well, and the government’s only response is to say that a Green Paper on the issue will be published in the summer. A Green Paper is basically a government consultation whereby views are sought from all those concerned with a particular policy area. They are often used to kick a thorny issue into the long grass, so it is to be hoped that this is a serious attempt to find a way forward by the government.

If we want to live in a civilised country, which provides for those in need, public services, both locally provided and nationally, will have to be funded properly. The only fair way to do this is through centralised taxation, but as we know, the Tories are ideologically opposed to this, especially for the most able to afford to pay it, the wealthy. I’m not too confident that this is a serious attempt to resolve social care funding, but maybe I will be proved wrong?