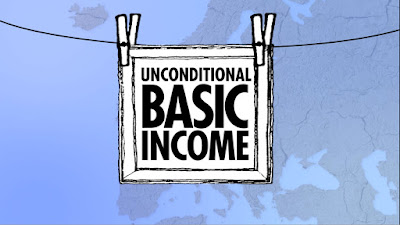 Written by Michael Roberts and first published at The Next Recession

The idea of a basic income has gained much popularity recently and not just among leftists but also with right-wing pro-capital proponents.  Basic income boils down to making a monthly payment by a government to every citizen of an amount that meets ‘basic necessities’ whether that person is unemployed or not or whatever the circumstance.

As Daniel Raventós, defines it in his recent book: “Basic Income is an income paid by the state to each full member or accredited resident of a society, regardless of whether or not he or she wishes to engage in paid employment, or is rich or poor or, in other words, independently of any other sources of income that person might have, and irrespective of cohabitation arrangements in the domestic sphere” (Basic Income: The Material Conditions of Freedom).

He lists various things in its favour: that it would abolish poverty, enable us to better balance our lives between voluntary, domestic and paid work, empower women, and “offer workers a resistance fund to maintain strikes that are presently difficult to sustain because of the salary cuts they involve”.

And recent books such as Inventing the Future by Nick Srnicek and Alex Williams and Postcapitalism by Paul Mason have also brought this issue to prominence. These writers reckon that the demand for a universal basic income by labour should be part of the struggle in a move to ‘post-capitalism’ and should be a key demand to protect workers from a capitalist world increasingly dominated by robots and automation where human beings will become mostly unemployed.

But ‘basic income’ is also popular among some right-wing economists and politicians.  Why? Because paying each person a ‘basic’ income rather than wages and social benefits is seen as a way of ‘saving money’, reducing the size of the state and public services – in other words lowering the value of labour power and raising the rate of surplus value (in Marxist terms).  It would be a ‘wage subsidy’ to employers with those workers who get no top-up in income from social benefits under pressure to accept wages no higher than the ‘basic income’ which would be much lower than their average salary.

As Raventos has noted, (in the American Journal of Economic Issues June 1996 with Catherine Kavanagh), “by partially separating income from work, the incentive of workers to fight against wage reductions is considerably reduced, thus making labour markets more flexible. This allows wages, and hence labor costs, to adjust more readily to changing economic conditions”.

Indeed, the danger is that the demand for a basic income would replace the demand for full employment or a job at a living wage.  For example, it has been worked out that, in the US, the current capitalist economy could afford only a national basic income of about $10,000 a year per adult. And that would replace everything else: the entire welfare state, including old age pensions disappears into that one $10,000 per adult payment.

The basic income demand is similar to the current idea among Keynesians and other leftist economists for increased public spending financed by ‘helicopter money’.  This policy means no fundamental reform of the economy but a just a cash handout to raise incomes and boost the capitalist economy.  Indeed, this is why the leftist Greek economist Yanis Varoufakis has viewed favourably the basic income idea.

A minimum equal income for everyone, Varoufakis tells us, is the most effective way to confront the deflationary trends that manifest capitalism’s inability to balance itself. Creating a minimum income that’s delinked from work, he argued, would increase effective demand without substantially increasing savings. The economy would grow again and would do so in a much more balanced way. The amount of the minimum income could become a simple, stand alone lever for the economic planners of the 21st century.

Here the basic income demand provides an answer to crises under capitalism without replacing the capitalist mode of production in the traditional Keynesian or post-Keynesian way, by ending ‘underconsumption’.  But what if underconsumption is not the cause of crises and there is a more fundamental contradiction within capitalism that a ‘basic income’ for all, gradually ratcheted up by government planners, cannot resolve?

Raventos retorts to this argument that “Some people complain that basic income won’t put an end to capitalism. Of course it won’t. Capitalism with a basic income would still be capitalism but a very different capitalism from the one we have now, just as the capitalism that came hot on the heels of the Second World War was substantially different from what came at the end of the seventies, the counter-reform we call neoliberalism. Capitalism is not one capitalism, just as “the market” is not just one market.”

This answer opens up a whole bag of tricks by suggesting that we can have some form of non ‘neoliberal’, ‘fairer’ capitalism that would work for labour, as we apparently did for a brief decade or so after the second world war. But even if that were true, the ‘basic income’ demand stands little prospect of being adopted by pro-capitalist governments now in the middle of a Long Depression unless it actually reduced the value of labour power, not increased it.

And if a socialist worker government were to come to power in any major capitalist economy would the policy then be necessary when common ownership and planned production would be the agenda?  As one writer put it: “The call for basic income in order to soften the effects of automation is hence not a call for greater economic justice. Our economy stays as it is; we simply extend the circle of those who are entitled to receive public benefits. If we want economic justice, then our starting point needs to be more radical.”

In his book, Why the Future is Workless, Tim Dunlop says that “the approach we should be taking is not to find ways that we can compete with machines – that is a losing battle – but to find ways in which wealth can be distributed other than through wages. This will almost certainly involve something like a universal basic income.” But is that the approach that we should take?  Is it to find ways to ‘redistribute’ wealth “other than through wages” or is it to control the production of that wealth so that it can be allocated towards social need not profit?

I have discussed in detail in previous posts what the impact of robots and AI would be for labour under capitalism. And from that, we can see an ambiguity in the basic income demand. It both aims to provide a demand for labour to fight for under capitalism to improve workers conditions as jobs disappear through automation and also wants basic income as a way of paying people in a ‘post-capitalist’ world of workless humans where all production is done by robots (but still with private owners of robots?).

And when we think of this ambiguity, we can see that the issue is really a question of ownership of the technology, not the level of incomes for workless humans.  With common ownership, the fruits of robot production can be democratically planned, including hours of work  for all.

Also, under a planned economy with common ownership of the means of production (robots), it would be possible to extend free goods and services (like a national health service, education, transport and communications) to basic necessities and beyond. So people would work fewer hours and get more free goods and services, not just be compensated for the loss of work with a ‘basic income’.

In a post-capitalist world (what I prefer to call ‘socialism’ rather than mincing around with ‘post-capitalism’), the aim would be to remove (gradually or quickly) the law of value (prices and wages) and move to a world of abundance (free goods and services and low hours of toil).  Indeed, that is what robots and automation now offer as a technical possibility.

The basic income demand is just too basic. As a reform for labour, it is not as good as the demand for a job for all who need it at a living wage; or reducing the working week while maintaining wages; or providing decent pensions.  And under socialism, it would be redundant.

Posted by Mike Shaughnessy at 07:00