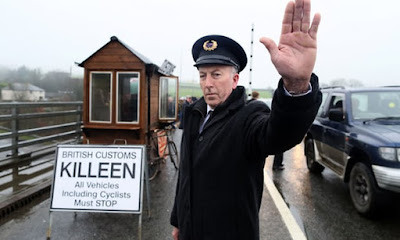 It is not as though the British government haven’t known of the potential problems for Ireland that Brexit causes, in the almost 18 months since the UK voted to leave the European Union (EU). This issue has been the subject of the same magical thinking though that has characterised the UK government’s approach to their whole Brexit strategy, if you can call it that.

A ‘technological solution’ is the best that the UK has come up with, whereby there is an exemption for all small traders and farmers from a host of customs, agricultural and food safety checks, on either side of the Republic/Northern Irish border. This has never really been a runner, as it makes a mockery of the EU’s borders and customs control, but the UK persists in insisting it is all perfectly reasonable, all the same.

At the weekend, Liam Fox, the International Trade Secretary, stated that the Irish border issue cannot be determined ahead of any trade deal with the EU, so it should be parked for now. Again, this has been the UK’s approach with all three of the EU’s initial demands: that a Brexit payment is made, and an agreement on UK and EU nationals living in the UK/EU are the other two, are concluded before talks on trade can begin. These first two issues are perhaps close to some agreement between the UK and EU, but the Irish border problem has not been progressed at all.

This was highlighted at the weekend by the Leo Varadkar, the Irish prime minister, saying he wants a written guarantee that the border will be kept open after Brexit, otherwise the Irish government will veto any trade deal. The Republic of Ireland exports £13 billion of goods to the UK, mainly farm produce, and £40 billion to the EU.

Fox’s position makes some sense, because an actual trade deal between the UK and EU will be part and parcel of the whole process. But that is only if you think the UK will get a bespoke deal with the EU, which seems highly unlikely. The EU also appears to support the Irish government’s position on this, so Fox’s line will probably not hold for much longer.

The only way this will be solved quickly, is if the UK agrees to remain in the European Single Market and Customs Union, but this has been specifically ruled out by the UK government. Alternately, the Irish government has suggested that Northern Ireland remains in the single market and customs union, even if the rest of the UK does not. It is possible this might work, but would throw up many problems unless the Irish Republic controlled all of Ireland’s borders, on behalf of the EU.

But the main Unionist party in Northern Ireland has ruled out any such arrangement. The Democratic Unionist Party (DUP) leader, Arlene Foster told her party conference at the weekend that their Westminster MPs will not agree to a special status for Northern Ireland. Fearing some kind of Sinn Fein plot to start a slide towards the uniting the island of Ireland, the DUP could bring down the minority Tory UK government in Westminster, if any such special deal is made for Ireland.

The impasse appears to be unbridgeable, with time running out for any deal to be struck. If the UK doesn’t remain in the single market and customer’s union, our likely trade deal will be similar, if not exactly the same as the recent CETA trade deal concluded by the EU and Canada. The UK will look to replicate CETA with Canada, and I don’t know the exact details of CETA, but I think we will have to remain in the trade deal anyway, even when we leave the EU. These agreements usually stipulate a continuation of the deal for a period even if you leave the trading union. An EU/UK CETA type trade deal will not solve the Irish border problem though.

Canada is different to the UK, in that it doesn’t have a land border with the EU, and so this trade deal is much easier to police. Say for example the UK makes a trade deal with the US, where the American’s have said this would have to include farm produce. We could have things like chlorinated chicken exported to the UK from the US, which contravenes EU laws. It could get from the UK into Northern Ireland and without border checks, into the Republic of Ireland and from there right around the EU unimpeded. The EU will not allow this situation to occur for obvious reasons.

So, we can have a deal with the US or the EU but not both, without the UK remaining in the single market and customs union, or the Republic of Ireland policing the whole Irish/UK border. But as I say the DUP will not tolerate this. So, no trade deal with the EU is possible, end of story, unless something gives.

But more than trade deals, this situation could have another more deadly consequence in Ireland. Irish senator Neale Richmond, a European affairs spokesman for the Fine Gael party that leads the government, has warned of violence if there is a return to a hard border in Ireland.

He said: “You put up one watchtower, or put out one customs patrol, and they will be a target, and I would argue they would be attacked within a week of them going up.”


After all the slow progress that has been made in Northern Ireland over the last twenty years, this is all at stake from English arrogance and fanciful thinking. Is a hard Brexit really worth the risks to peace in the UK and Ireland? I don’t think so.

Posted by Mike Shaughnessy at 10:07