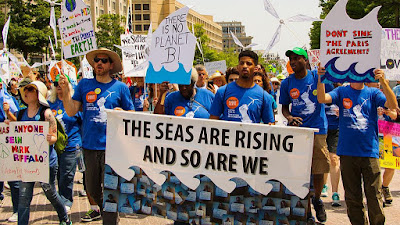 Written by Richard Smith and first published at Common Dreams

On Monday November 13th, climate scientists from the Tyndal center for Climate Change Research at the University of East Anglia presented their carbon emissions research to the UN climate negotiators at Bonn Germany. The data were shocking: After three years in which human-caused emissions appeared to be leveling off, global CO2 emissions are now rising again to record levels in 2017. Global emissions are on course rise this year by 2%. China’s emissions are projected to rise by 3.5%.

These may sound like small numbers but to climate scientists these are huge because if we’re to keep global temperatures from rising by more than 2 degrees Centigrade, those emissions need to be falling sharply, not just leveling off, let alone rising. Colorado State University climate scientist Scott Denning said “We’ve got to cut emissions by half in the next decade, and by half again in the next two decades, as well. The fact that it’s going up is like a red flag flashing light on the dashboard.”

The same day, the journal BioScience published a letter by more than 15,000 scientists from around the world that looks back at the human response to climate change and other environmental challenges in the 25 years since another large group of scientists published the 1992 “World Scientists Warning to Humanity.”

This time the scientists wrote in part: "Since 1992, with the exception of stabilizing the stratospheric ozone layer, humanity has failed to make sufficient progress in generally solving these foreseen environmental challenges, and alarmingly, most of them are getting far worse." If we don’t take immediate steps, “soon it will be too late to shift course away from our failing trajectory, and time is running out. " The goal of the letter, said William Ripple, distinguished professor in the college of Forestry at Oregon State University, and lead author of the new warning, is to "ignite a wide-spread public debate about the global environment and climate."

Ripple is right. We need a conversation, a global public debate about the global environment and how to save the planet, and we need to begin it right now.

As if on cue, in yesterday’s New York Times, Professor Benjamin Fong launched a broadside placing the blame squarely where it needs to be. The problem isn’t public ignorance, it isn’t bad politicians, it isn’t even bad companies:

The real culprit of the climate crisis is not any particular form of consumption, production or regulation but rather the very way in which we globally produce, which is for profit rather than for sustainability. So long as this order is in place, the crisis will continue and, given its progressive nature, worsen. This is a hard fact to confront. But averting our eyes from a seemingly intractable problem does not make it any less a problem. It should be stated plainly: It’s capitalism that is at fault.

For far too long, polite conversation, public debate and consideration of policy initiatives have been subordinated to the imperatives of capitalist reproduction, above all profit maximization. Profit maximization and job creation go hand in hand and crucially depend upon economic growth. All “reasonable” solutions to the crisis of global warming take that as their starting point, a fundamental principle that cannot be challenged. This is the unspoken premise of carbon taxes: Carbon taxes do not threaten growth.

They’re simply another cost of doing business, another tax which moreover can be passed along to consumers. This is why ExxonMobil, Shell, BP and most big fossil fuel companies support carbon taxes as the lesser evil (cap and trade is the greater evil precisely because a cap would threaten growth, which is why cap and trade are not acceptable to business and why such schemes have all been either rejected outright as in the United States or so watered down as to be useless charades as in Europe, British Columbia and elsewhere). The oil companies are not looking to put themselves out of business. Industry and IEA studies project that global demand for fossil fuels will rise by 40% over the next few decades and the oil companies intend to cash in on this growth. To do so they need to deflect criticism by being good citizens, paying their carbon taxes, contributing to the “solution” or at least appearing to do so.

The problem is, we live in an economy built on perpetual growth but we on a finite planet with limited resources and sinks. To date, all efforts to “green” capitalism have foundered on this fundamental contradiction: maximizing profit and saving the planet are inherently in conflict and cannot be systematically aligned even if, here and there, they might coincide for a moment. That’s because under capitalism, CEOs and corporate boards are not responsible to society, they’re responsible to private shareholders. CEOs can embrace environmentalism when it boosts profits, as with energy efficiency, recycling, and new “green” products and the like.

But saving the world requires that the pursuit of profits be systematically subordinated to ecological concerns—and this they cannot do. No corporate board can sacrifice earnings, let alone put itself out of business, just to save the humans because to do so would be to risk shareholder flight or worse. Profit-maximization is an iron rule of capitalism, a rule that trumps all else, and this sets the limits to ecological reform within capitalism—and not the other way around as the promoters of “green capitalism” imagined.

To save the humans we know we have to drastically cut fossil fuel consumption. But “Keep It in the Ground” is not just an abstraction and not just about future supplies. If we’re going to radically suppress fossil fuel consumption in the here and now as we must, then this has to translate into drastic retrenchments and closures of industrial plants across the economy—and not just of coal mines, oil and gas companies but all the fossil fuel dependent industries: autos, trucking, petrochemical industries, airlines, shipping, construction and more.

What’s more, the global ecological crisis we face is far bigger than just fossil fuels. We’re not just overconsuming fossil fuels. We’re overconsuming every resource on the planet, driving ourselves and countless other species to extinction. Ultimately, if we really want to save the planet, we’re going to have to shut down or at least drastically retrench all kinds of resource-hogging, polluting, unnecessary, unsustainable industries and companies from fossil fuels to bottled water, from disposable products to agrichemicals, plastic junk to military weapons of destruction.

"There’s no point in chanting 'Keep It in the Ground' if we don’t have a jobs program for all those workers whose jobs need to be excessed to save those workers’ children and ours. This is our dilemma."

Take just one: Cruise ships are the fastest growing sector of mass tourism on the planet. But they are by far the most polluting tourist indulgence ever invented: Large ships can burn more than 150 tons of the filthiest diesel bunker fuel per day, spewing out more fumes—and far more toxic fumes—than 5 million cars, polluting entire regions, the whole of southern Europe – and all this to ferry a few thousand boozy passengers about bashing coral reefs. There is just no way this industry can be made sustainable. The cost of the ticket for that party boat cruise is our children. The same can be said for dozens if not hundreds of industries, thousands of companies around the world. We can save these industries, save capitalism, or we can save the planet. We can’t save both.

Needless to say, retrenching and closing down such industries would mean job losses, millions of job losses from here to China (pdf).  Yet if we don’t shut down those unsustainable industries we’re doomed. What to do? There’s no point in chanting “Keep It in the Ground” if we don’t have a jobs program for all those workers whose jobs need to be excessed to save those workers’ children and ours. This is our dilemma.

Capitalism cannot solve this problem because no company can promising new jobs to unemployed coal miners, oil-drillers, automakers, airline pilots, chemists, plastic junk makers, and others whose jobs would be lost because their industries would have to be retrenched—and unemployed workers don’t pay taxes. So CEOs, workers, and governments find that they all “need” to maximize growth, overconsumption, even pollution, to destroy their children’s tomorrows to hang onto their jobs today. Thus we’re all onboard the high-speed train of ravenous and ever-growing plunder and pollution.

And as our locomotive races toward the cliff of ecological collapse, the only thoughts on the minds of our CEOS, capitalist economists, politicians and labor leaders is how to stoke the locomotive to get us there faster. Professor Fong is right: Corporations aren’t necessarily evil. They just can’t help themselves. They’re doing what they’re supposed to do for the benefit of their owners. But this means that so long as the global economy is based on capitalist private/corporate property and competitive production for market, we’re doomed to collective social suicide and no amount of tinkering with the market can brake the drive to global ecological collapse.

We can’t shop our way to sustainability because the problems we face cannot be solved by individual choices in the marketplace. They require collective democratic control over the economy to prioritize the needs of society and the environment. And they require local, national, regional and international economic planning to re-organize our economies, to provide new jobs to replace those jobs we need to abolish, and to rationally and fairly redeploy resources to those ends.

In a paper I wrote for The Next System Project last year—"Six Theses on Saving the Planet"—I laid out my argument for ecosocialism as the only alternative to market-driven ecological collapse in the form of six theses:

Capitalism, not population is the main driver of planetary ecological collapse and it cannot be reformed enough to save the humans.

Green capitalism can’t save us because companies can’t commit economic suicide to save the humans. There’s just no solution to our crisis within the framework of any conceivable capitalism.

The only alternative to market-driven ecological collapse is to transition to some sort of mostly planned, mostly publicly owned economy based on a global ‘contraction and convergence’ around a sustainable level of resource consumption that can provide a dignified living standard for all the world’s peoples while leaving enough for future generations and other species.

Democracy requires rough socioeconomic equality – which requires that we abolish extreme differences in incomes and wealth and enforce those rights already in theory guaranteed to us in the Universal Declaration of Rights (1949) including the right to work at fair compensation, the right to equal employment, the right to adequate food, housing, medical care, education, social services, and a comfortable retirement.

Far from “austerity,” an ecosocialist future offers us liberation from the treadmill of consumerism, from the fetishism of commodities. Freeing ourselves from the toil of producing unnecessary and /or harmful products and services would free us to shorten the work day, to enjoy the leisure promised but never delivered by capitalism, to redefine the meaning of the standard of living to connote a way of life that is actually richer, while consuming less, to realize the fullest potential of every human being. This is the emancipatory promise of ecosocialism.

For some readers, my arguments may raise as many questions as they answer. Fine. But if we don’t change the conversation, if we don’t deal with the systemic problems of capitalism and come up with a viable alternative, our goose is cooked.  So if not ecosocialism, then what? This is the public debate we need to be having right now. What are your thoughts?

Richard Smith is co-founder of System Change Not Climate Change.org
Posted by Mike Shaughnessy at 11:46