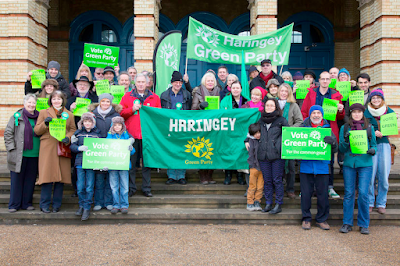 My local Green Party, Haringey in north London, are to discuss accommodating some Labour Party candidates at next year’s full London council elections. In London, all councillors are elected every four years, so three candidates are all elected to serve as councillors in all wards at the same time. In Haringey this amounts to 57 councillors in total.

In Haringey the big issue at the moment is the Haringey Development Vehicle (HDV) which aims to sell off residential council properties and land for the redevelopment of housing in the borough. This £2 billion deal has caused much controversy as the suspicion is that this is an exercise in gentrification, as has happened in other parts of London with similar schemes, where social housing forms only a small part of the new development.

The local ruling Labour Party is split on the issue, with Momentum and fellow travellers trying to replace Labour councillors who support the development, including the leader of the council Claire Kober. Local Greens are set to discuss the motion below at their next meeting on 13 November.

Whilst I do not agree with the specifics of the motion, as a former election agent of eight years standing and for the last two full council elections, I do think we should build into our candidate selection some flexibility. We might not stand a full state of candidates, as we have for the last two full council elections, to help Momentum to change the balance of the Labour council against HDV. We may well not know until late in the day who Labour has selected, but I think we should keep the option open.

I also think Labour (or the faction of it against HDV) should reciprocate in some way.

Here is the slightly redacted motion:

Haringey Green Party believes that the changing local political situation and the substantial divisions within the local Labour Party require a flexible response for our electoral strategy for the 2018 council elections which should be reflected in the Action Plan to be discussed at the AGM in January. In particular:-

b) Labour councillors are similarly divided on estate demolitions, Tottenham ‘regeneration’ plans and social care cuts, with some following the Kober/Strickland leadership on these issues and others opposed

c) where ward Labour parties disagree with their sitting councillors, some of these councillors may be de-selected as candidates for 2018 and replaced by individuals more opposed to the HDV and to estate demolitions

If we want Greens elected we should target those councillors who are close to the increasingly unpopular Kober leadership and not those already opposed to the HDV with whom we can work on that issue and possibly on other issues. Our target ward of XXXX already has XXXX as a prominent opponent of the HDV and of cuts in social care.

The unpopularity of XXXX and XXXX make it particularly worthwhile to challenge them in XXXX.

Haringey Green Party should adopt the following objectives (to be voted on one by one):-

1) We should avoid taking votes from sitting Labour councillors who have consistently stood out against the Labour leadership and opposed the HDV. We should invite voters to consider the views of all candidates about the HDV and vote for Greens and any other candidates who can be relied on to defend social housing and oppose estate demolitions which are against the wishes of residents.

2) This would mean that whilst we would continue campaigning in XXXX as our first target ward, if XXXX is standing again there we would re-deploy one of our already selected candidates to another ward, so that those voters convinced by our arguments against the HDV and against social care cuts will find no contradiction in supporting 2 Green candidates alongside XXXX; that is, they will not have to choose between Green candidates and a Labour candidate with specific views that are similar to our own on some key issues.

3) We will consider challenging all sitting councillors, whichever party they represent, to a series of Green demands (to be discussed at the AGM but e.g. no more land transferred to the HDV if it goes ahead, no estate demolitions, no loss or privatisation of parks, maximum permitted ‘precept’ for social care, renewed resources and attention to the Greenest Borough strategy, etc); and tell them that if any councillor who is standing for re-election supports all of our demands, we will reduce the full ‘slate’ of 3 Green candidates in his/her ward by one.

4) We should adopt XXXX as our second target ward, since XXXX and XXXX are both sitting councillors there.

5) We should retain some flexibility in our electoral strategy for the 2018 council elections in case any sitting councillors are de-selected and are replaced by candidates with different views. We should take note of information which is likely to become available through Labour Party contacts in December, to try to find out the selection decisions of other parties far enough in advance to tailor our own strategy to their candidate selection for particular wards.

6) We should earnestly and urgently seek out Green candidates for wards across the borough who are able and willing to speak at hustings and engage in no-cost social media and press work, and who really want to become councillors, and provide them with adequate training and briefing on local issues in order to take forward our 2018 campaign.

7) We should agree at the AGM a set of 4 to 6 main demands which will be our platform for the 2018 elections and which will be reflected in point 3 if adopted.

Posted by Mike Shaughnessy at 10:03