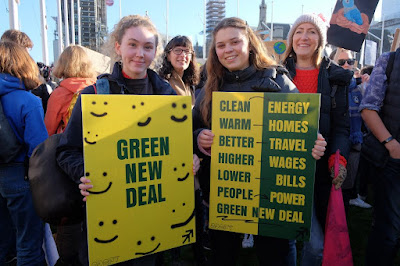 Why the Green New Deal is our best shot at tackling the climate crisis while advancing economic and social justice.

The world’s climate is changing, and it’s surprising — and disappointing — how little our responses have changed since we first recognized the problem decades ago. Since the 1970s, the world has been well aware of climate impacts of burning fossil fuels and many have recognized how our political economy lies at the heart of the problem. Marxist thinkers in particular, like Paul Mattick, were quick to describe the irreconcilable contradiction between our extractive and growth-oriented economic systems and the carrying capacity of our natural ecosystems.

But despite these prescient warnings, the world today is still clinging to the same economic systems and largely failing to resolve these tensions. In the face of the accelerating crisis, it’s worth reflecting on the clear trajectory that thinkers like Mattick identified, and what it means for our options in the present moment.

In 1976, Mattick published his analysis of the problem in “Capitalism and Ecology,” just four years after scientist John Sawyer published the study Man-made Carbon Dioxide and the “Greenhouse” Effect in 1972. Sawyer’s study summarized the scientific consensus at the time around the Earth’s pressing climate concerns: the anthropogenic attribution of the carbon dioxide greenhouse gas, their widespread distribution and their exponential rise throughout the modern era.

By the mid-70s, even the Club of Rome recognized the impending ecological crisis in The Limits to Growth. In short, everyone was beginning to recognize the issue: too many of us are using too many resources, too quickly, in too many places.

As Mattick writes, Marx recognized that “the exhaustion of the earth’s wealth and relative overpopulation were the direct result of production for profit” (a point that has been explored in great detail by a new generation of eco-Marxists like John Bellamy Foster). And science bears this out.

Our world has only become more productive, populated, and globalized since the Industrial Revolution, and this has correlated closely with rising levels of energy usage and greenhouse gas emissions every year. As our economic activity increases, we cannot avoid using more raw materials to keep the system moving and maintain profit margins.

Ultimately, it is capitalist social relations that drive this ecological crisis. “Social phenomena are ecological phenomena,” Mattick writes. To keep profit rates high (the motor driving the entire system), companies simply have no choice but to keep expanding and growing, and that always requires the use of raw materials — and as global capitalism expands (and demand grows as populations increase and more workers are brought out of the subsistence economy into the wage labor system), that rate of raw material consumption can only increase.

But this does not mean that the solution is to roll back our productive forces and institute new limits on personal consumption. For millions of exploited workers, a vision of the future defined by less is a very hard sell. In fact, if we take this approach, we risk undermining our own efforts to build economic justice.

The Yellow Vests movement in France was sparked by a new tax on gasoline, as were protests in Ecuador against the elimination of a fossil fuel subsidy. The logic behind the proposals used an ecological rationale: wealthy people use far more oil, so limiting their excesses is sensible and, at first glance, progressive. The problem comes from the ways that such approaches are regressive at the margins.

While lower income people do use far less oil than the wealthy, they rely heavily on subsidies and cheap fuel simply to be able to go about their days. The problem is that these approaches impose ecological austerity whose burden is felt most strongly by the working class, and offer little benefit to them in return.

Besides, the promise of communism was the progressive advance of productive forces to improve overall human well-being. Rather than advance a dialectic, rolling back production and consumption would only turn back the tide of history to earlier modes of production. Fundamentally, we cannot resolve this crisis simply by turning back the clock.

We must remember that humanity does not live separately from the natural world (even though we tend to conceive of ourselves this way); we rely on it to reproduce our societies every day. So the way forward must be with a recognition that the two are inextricably linked. It is our social reality that drives our ecological condition, and trying to treat the ecological condition without addressing the roots of our social relations will only lead to these kinds of regressive solutions.

As Mattick summarizes, “[T]he problem is not so much the miserliness of nature as a social class system of institutions and power relationships that stands in the way of increasing production and productivity.” Rather, “it is landed property, the tenant-farming system, usurious loan capital, the plantation economy, and the parasitical state bureaucracy that hinder any progressive development by maintaining the existing social structure.”

Likewise, “the increasing discrepancy between industrial and agricultural production has less to do with population growth and decreasing fertility of the soil than with the one-sided over-emphasis on industrial expansion, or capital’s expansion, demanded by capitalist competition” at the expense of agricultural output (let alone any embrace of polyculture or regenerative agriculture).

The task, then, is to overcome the key issue we identified before: the link between economic activity and environmental impact. But to do so, Mattick writes, we must treat social liberation as the prerequisite to ecological transformation:

“What is necessary, today and tomorrow, is to end the human misery due to the capitalist relations of production, as the starting-point for a rationally planned mode of society in accordance with natural conditions—one based not on further privations but on a higher standard of living for everyone, on which the diminution of population growth depends, and which would make possible the further development of society’s productive forces.”

In other words, development itself is not the problem, but rather the way that it has taken place under conditions of competitive struggle, where environmental costs are externalized without frameworks for accountability. And critically, this competitive struggle is not dictated by our actual access to raw materials, but rather by a capitalist mode of production that perpetuates artificial scarcity to maintain competitive growth rates.

With that in mind, the way forward is to continue developing productive forces progressively (and in ways that actually offer quality of life improvements for workers), but to do so under a new framework that is rationally planned, actually serves human need, and meaningfully takes ecological limits into account.

Fortunately, one policy proposal has begun to synthesize these insights and, despite some gray areas, has managed to get buy-in across the political spectrum: the Green New Deal (GND). The GND represents a revolutionary shift in how we conceive of environmental policy by tying it inextricably to labor and industrial policy. This comes with both the benefits and risks of being a placeholder for a holistic social transition (onto which many different actors can project distinct visions). But it still shifts consciousness of the issue, and must be developed, not abandoned.

The GND recognizes that, given the existential threat climate change poses to human society, the federal government (in coordination down to the local level) must lead a deliberate and expansive national mobilization to restructure our physical realities, as well as social and economic systems, and build a new, sustainable way of life in the country.

It overcomes the binary between environmentalism and class struggle by placing workers and marginalized communities at the center of this transition, promising that high-paying union jobs will enact the program and build our carbon-neutral systems, with an emphasis on serving frontline communities and undoing the damage that the capitalist mode of production has already inflicted on working people through environmental racism and pollution.

Furthermore, the GND is distinct in its national approach to the issue, which actually recognizes the sheer scale of what will need to be done to meet our climate goals.

Ultimately, we must also challenge the idea that all forms of growth are equal. Much (if not most) of our productive activity is wasteful, and we should cut back on resource-intensive activities (which largely don’t benefit the public, anyway) and instead organize our economies around lower-impact, more human-centered labor like care work. Mattick writes that much of our wasteful economic activity “could be transformed into productive labor—’productive’ not in the sense of profitable but in the sense of creative of use-value [emphasis mine] —while shortening labor time.”

We would still have to work and promote development in our communities to deliver improved quality of life and overall social prosperity, but we can approach it in a rational way that operates within ecological boundaries. This also implies new social, political, and economic relations that can build a more egalitarian society.

This represents a more radical vision of what the Green New Deal can offer by reconceptualizing the goals of our economic and social systems. To truly operate within planetary limits, it’s not possible for individual consumption to remain at current levels. But at the same time, we must be able to offer a better future for the masses if we have any political hope of advancing a sustainable system.

The notion of public luxury could be the key to resolving this tension. In some ways, it’s common sense: collective problems require collective solutions, and collective cooperation makes for a smaller impact for each individual (hence the old saying “many hands make for light work”). Our social relations fundamentally define how we use energy and resources, so to be as sustainable as possible it only makes sense that we must embrace collective and cooperative frameworks to maximize efficiencies.

And if we do so appropriately, we can truly speak of luxuries for the public: well-connected rapid transit systems, higher-quality housing, more green spaces and public parks, more resources devoted to healthcare and other care work, more free time, shorter hours, well-funded public amenities, etc.

Systems driven by social competition produce destructive cycles for the individuals within them, and will reproduce similar forms of destruction on an ecological level. It is only through cooperation, coordination, and a commitment to collective well-being that we can deliver a sustainable and flourishing future.

Whatever it’s called, such a system would represent a historic and revolutionary departure from the capitalist mode of production, and would likely have to approximate a form of communism. If that is the case, then true communism may be our only hope for a sustainable future on Earth.

Still, we can’t be utopian in our outlook; there are limits to what can be done, both politically and ecologically. Any transition from our system will require massive amounts of lithium and likely more resource-intensive development to build the infrastructure for a sustainable society; this is sure to unleash new struggles over control of resources and raw materials and could meet justifiable resistance from frontline communities.

And there are sure to be significant challenges in shifting our mode of production: as we restructure our way of life, new fractures are certain to emerge and new struggles will have to arise over the form that this takes. It will be a difficult line to walk, but the left must develop a vision that advances economic and political justice as a prerequisite to ecological transformation, and sustainably develops clean productive forces that don’t rely on moonshot technologies like carbon removal.

Now more than ever, we must challenge the underlying logic and the basis on which our system operates, and we must remain committed to this radical vision for a different society.
Posted by Mike Shaughnessy at 05:26