In Defence of Universal Basic Income 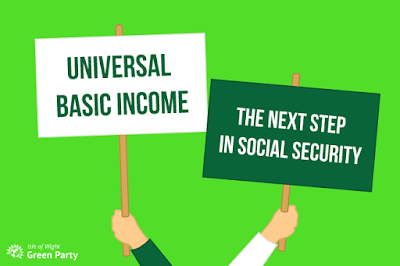 As a member of the Green Party of England and Wales (GPEW) Working Group on Universal Basic Income (UBI), I take issue with Huseyin Kishi’s post on this blog. It seems he fundamentally misunderstands the GPEW’s proposals and the relationship of UBI to free public services:-

* UBI is not an alternative to free collective public services that Greens defend and expand, like the NHS, social care, education, public transport and free childcare. Both are affordable – it’s a question of fiscal policy and the will to implement it.

* Kishi’s cost figure of £331bn is hugely exaggerated; it was the GROSS cost, of the GPEW 2016 scheme, not the NET cost which is close to zero after Exchequer savings from abolishing many existing  benefits and tax concessions. Similarly, NET costs of the 2019 scheme were under £1bn.

* With the addition of the carbon dividend (explained below), the GPEW rates were considerably higher in the 2019 proposal than in the 2016 one Malcolm Torry criticised in the Guardian. But in both years, illustrative calculations for household types comprising over 95% of households showed no losses compared to the Universal Credit (UC) system. Kishi mentions the Joseph Rowntree Foundation’s (JRF) argument that poverty would worsen if a UBI was introduced without also keeping means tested benefits.

What JRF criticised were the schemes Compass rejected in a 2016 report[i] that JRF co-funded. Compass concluded, either keep existing benefits or fund a higher UBI by using  a wealth tax or higher corporation tax – and modelled some alternatives to illustrate that. The GPEW’s 2019 proposal has higher UBIs and lower income tax  than any of Compass’s  schemes.

It introduces a carbon tax, which funds a ‘carbon dividend’ as part of the UBI, and abolishes some tax concessions the Compass report didn’t. However, in case of unusual needs, the GPEW proposal had about £1bn in a discretionary fund for special cases – perhaps a 12-child family, or a complex household with two Carer’s Allowances.

* Kishi argues correctly that housing benefit has become a handout for landlords. The Green Party would address this through rent controls. For simplicity, most UBI proposals treat housing cost and disability support – which also needs to be substantially increased – as a separate issue.

The New Economics Foundation argument about UBI versus free public services assumes we cannot afford both.

Drawing on corporate and private wealth to augment public spending is vital to reverse austerity in public services. Fiscal sources need to evolve gradually in the context of moving towards more public ownership, less inequality and a greener economy - probably towards more wealth taxes and land taxes.

Compass (2016 report, pp 19-20) points out that reversing the 2015/6 cuts in corporation tax and fuel duties would raise around £19.5bn, and that taxes on wealth fell considerably in recent years. Since buildings cannot move overseas, the Green Party advocates a land value tax in the  long-term, to enhance redistribution and public spending. One could add; cancel Trident and cut subsidies on fossil fuels amongst other useful savings.

Compass suggests replacing means tested benefits gradually, moving from an unconditional  supplement to existing benefits to a larger UBI. With reason, the GPEW says introduction of a UBI needs longer than one Parliament. The March 2019 Compass scheme[ii] envisaged long-term expansion of UBI  based on a ‘national wealth fund’ – income-earning public sector assets plus levies on corporate and private wealth. This would be a useful successor to a carbon tax, which if successful in reducing emissions would yield less over time.

UBI would be massively popular for two reasons: ending the ‘poverty trap’  and its abolition of benefit sanctions and means tests. Freed from the huge ‘marginal tax rates’ caused by benefit withdrawal at 63p of UC for each £1 earned, more people would take work even if casual or insecure.

Claimants suffer untold stress from means-testing and conditions about work search and job-centre requirements, plus the five week wait for UC, threatening letters demanding repayments if the Department for Work and Pensions gets its sums wrong, and criminalisation of people who don’t report changes of circumstances when earnings vary from week to week.

The JRF critique of  Compass’s ‘full UBI’ proposals - the ones Compass rejected because they increased poverty – argues that the current benefit system achieves better targeting of monies at the most needy. Mainly because abolishing the personal tax allowance – a major funding source for UBI - makes the lowest incomes very sensitive to the new income tax rate.

The rejected Compass schemes had a 30% standard rate plus national insurance at 12% on all income above the exemption band; GPEW 2019 has 32% ‘all in’ with no extra National Insurance. Compass’s latest (2019) proposal had standard  income tax at 23%, but  only 15% for the first £11,850 earned. The GPEW had instead a tax-free earnings band of at least £1000 at the bottom of the scale, partly to save people with tiny earnings from doing tax returns.

Perfect targeting at the poorest is impossible without high withdrawal rates of benefit on low incomes.[iii] UBI evens out marginal tax/withdrawal rates on income (counting the benefit taper rate for UC as a kind of tax). They fall for people dependent on state support, rise for those whose earnings help finance UBI. That fall in the effective ‘tax’ on the unwaged is crucial to fairer taxation and to ending the poverty trap.

UBI is ever more needed in the post-pandemic period – to deal with mass unemployment and job insecurity, plus providing part of a fiscal stimulus. Its unconditional  nature is crucial. There are many UBI schemes and many ways to fund them. The JRF’s critique didn’t prevent Compass from initiating a major campaign for UBI to alleviate COVID-engendered poverty.[iv] It’s high time to join it and campaign for better public services as well.

[i] Universal Basic Income; An idea whose time has come, May 2016, https://www.compassonline.org.uk/wp-content/uploads/2016/05/UniversalBasicIncomeByCompass-Spreads.pdf.

The GPEW 2016 proposal had much lower income tax than in the ‘full BI’schemes that this Compass report rejected.

Posted by Mike Shaughnessy at 08:22