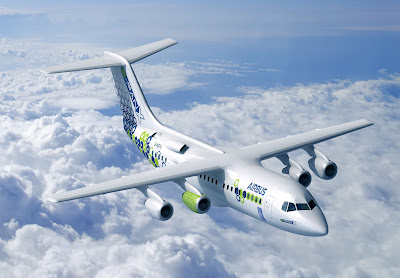 UK transport minister, Grant Shapps, announced on Friday at the daily coronavirus press conference, that flights across the Atlantic will be carbon neutral ‘within a generation.’ Shapps said. ‘So we're bringing together leaders from aviation, environmental groups and government to form the Jet Zero Council. This group will be charged with making net zero emissions possible for future flights.’ The idea is part of the government’s plans for a ‘green recovery’ for the economy once the pandemic is brought under control.

Carbon emissions from commercial aircraft only amounts to about 3% of global emissions, but were rising before the pandemic and are expected to account for 25% by 2050. And because of the height at which fuel is burned in jet aircraft, it causes two to four times the amount of damage to the planet's atmosphere.

The greenhouse gas emissions of one person flying round-trip from New York to London is the same as what it takes to heat a single-family home for a year. It is certainly important to reduce these emissions if we are to keep to the under 1.5 C rise in temperatures commitment of the COP21 made in Paris in 2015.

So, what are the options that this council will likely look into and how realistic are they? Shapps confirmed fresh government funding is to be provided to Velocys in support of its plans to build a major jet biofuel plant in Lincolnshire, so this seems to be the currently favoured way to achieve zero carbon emissions. There are a number of problems with this approach though.

As always with biofuels, the main problem is of being able to produce enough fuel from land that will be in competition with our food production needs. Biofuels can be produced from waste food but it is much more expensive compared to oil based fuels.

It might be possible to mix biofuels with conventional aircraft fuel, making some savings in emissions, and then using some kind of carbon offsetting scheme, like planting trees to absorb the remaining emissions. This is controversial though, as it is unlikely to get to a net zero position. Some trees don't get planted, and others only for a few years before they are felled. It is the easiest route, but not likely to be very effective.

Electric powered aircraft is another option. Instead of using traditional fuel to power a plane, which releases large amount of pollution, electric planes use large batteries that are chargeable and provide a powerful and clean flight. Electric planes currently are only good for trips less than 1,000 miles, which do produce 40% of all aviation emissions, but are still short enough to ideally travel on a single charge.

And here lies the problem with electrically powered planes. That New York to London trip, which is a very busy route, and of course, ‘across the Atlantic’ is 3,459 miles. To make this distance an aircraft would need a battery 3 or 4 times the size of a 1,000 mile battery, and so make the plane heavier, using more electricity, This would not really be economically viable, since the number of passengers able to be carried as well, would probably be about fifty at most.

Of course the electricity will need to be produced somehow, and I think it is unlikely that renewable energy could produce enough, for air and road travel plus that for domestic homes and workplaces.

Again a hybrid system seems more viable. Aviation giants like Boeing, Airbus and Raytheon are also experimenting with 'eco-friendly' airplane designs. Boeing is working on the SUGAR Volt plane that uses both electricity and fuel, similar to a hybrid car.

The idea was first created in 2006, and Boeing is working with NASA to deliver results by 2040. Airbus is building E-Fan X, a battery-powered plane that replaces one of its four traditional engines with an electric motor that has the equivalent power of 10 cars. The E-Fan X is expected to take its first flight in 2021, and Airbus hopes to use it as a commuter plane within 20 years.

The majority of hydrogen (∼95%) is produced from fossil fuels by steam reforming or partial oxidation of methane and coal gasification with only a small quantity by other routes such as biomass gasification or electrolysis of water. Even though hydrogen itself is essentially non-polluting when burned (some nitrogen oxides may be formed), there is a carbon footprint associated with it.

Obtaining hydrogen from the electrolysis of water is in the process of being studied as a viable way to produce it domestically at a low cost, but it not here in large amounts at present. But there is another problem with hydrogen as air fuel.

Hydrogen fuel is hazardous because of the low ignition energy and very high combustion energy of hydrogen, and because it tends to leak easily from tanks. We have had an illustration of this susceptibility to combustion when in 1937 the Hindenburg airship, with a massive balloon carrying hydrogen caught fire and crashed spectacularly in New Jersey, in the US. There were 35 fatalities (13 passengers and 22 crewmen) from the 97 people on board. Passenger confidence never recovered, and these type of airships were abandoned.

So there we have it. The UK government’s aim is highly optimistic to say the least. It does fall into a pattern with these ‘green’ plans which always are set well into the future, without a feasible plan to achieve success.

Carbon Capture and Storage technology comes to mind, which may well be part of this plan, but has never been achieved on any kind of large scale. All of these things want to carry on with business as usual, rather make real cuts to emissions and so reduce the danger from global warming. Will we have carbon zero flights across the Atlantic in twenty years time? I don't think so. In short, it is greenwash.

Posted by Mike Shaughnessy at 02:59