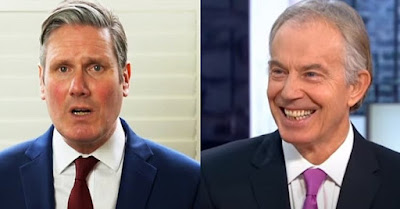 Keir Starmer, the UK Labour party leader, made much of his left wing credibility in his political youth, no doubt to appeal to the largely left wing membership in his successful campaign to win the leadership. With some justification it seems, as he was on the editorial board of Socialist Alternatives magazine, a small-circulation Trotskyist-linked red/green journal that billed itself as ‘the human face of the hard left’. He also, as a lawyer, defended poll tax protesters and the ‘McLibel Two,’ in court cases.

Since Starmer became leader of the Labour party though, the signals coming out from himself and shadow Cabinet colleagues is all rather cautious, and definitely ‘centrist’ in nature. Any kind of radical politics have been nowhere to be seen.

He has kicked into the long grass an inconvenient issue, by announcing an investigation into the leaked party report of the sabotaging of Labour’s chances of winning the 2017 General Election, by party officials. It will be chaired by Martin Forde QC, who currently acts as an independent adviser to the Home Office on the government's Windrush compensation scheme, and is seen as a Starmer ally. The pro-Israel lobby inside and outside of the party has been courted too.

Then we come to Starmer’s response to the toppling and throwing into the harbour of the statue of Victorian era British slave trader, Edward Colston, at the Black Lives Matter protest in Bristol. Interviewed on LBC radio about the incident.

He said: "It shouldn't have been done in that way. Completely wrong to pull a statue down like that.

"But that statue should have been taken down a long, long time ago.

"This was a man who was responsible for 100,000 people being moved from Africa to the Caribbean as slaves, including women and children, who were branded on their chests with the name of the company he ran.

"He should not be a statue in Bristol or anywhere else."

Most people would agree with the second part of this answer, including the Home Secretary, Priti Patel, who later blamed the long-time Labour run council for not removing the statue sooner. Her advisers were obviously listening to the Starmer interview. But what struck me most was, the Janus like attempt to cover off the criminal activity, but probably of a popular act, and to not be seen to condone it, but at the same time make an anti-racist statement of solidarity, with those who suffered and died.

It immediately brought to mind Tony Blair’s catchy soundbite, ‘tough on crime, tough on the causes of crime’, from his early years as Shadow Home Secretary and in time leader and Prime Minister. He was a better communicator than Starmer, who has a rather slow and dull style, effective though it is, against our blustering Prime Minister in Parliament. Blair, of course was a member of CND in his youth, and look where that went?

Starmer’s answer had the same kind of feel about it, trying to appeal to both sides of opinion, those appalled by what went on in Bristol, and those who broadly supported it. The old triangulation trick. All in all though, the feeling I get so far from the new regime in the Labour party, is very much a back to the future, if you get what I mean.

You could say this is clever politics, at a time when the government are trying to paint the opposition as ‘unpatriotic’ whenever the government's handling of the pandemic crisis or anything else is criticised. The Tories have been whipping up nationalistic sentiment over Brexit, and doing the same thing with all other issues it seems. Which is all very well, but where are the principles?

Campaigners in Bristol have been trying the legal route of removing the statue for 30 years, to no avail. No one was hurt, just an odious statue removed. No one listened to the suffragettes until they started breaking windows etc.

Most Labour left members as far as I can see are staying with the party, although some have left, waiting to see if the policies change from the last manifesto, and to what extent. That remains an open question at this stage, but the ‘centrist’ signs elsewhere, do not bode well in my opinion. What will happen to policies like the ‘green industrial revolution’ promised by the Corbyn led party, for instance? Will it be watered down to something less radical so as not to scare the horses?

It does look as though this has been mirrored in the US, with Joe Biden gaining the Democratic party presidential nomination. Biden won’t have any kind of radical Green New Deal if he wins the presidency. Bernie Sanders and perhaps Elizabeth Warren were the only hope of that. Maybe, more radical thinking in the big leftish parties in the UK and US has had its albeit brief day?

For any kind of an even small move in the direction of ecosocialism, in the UK and US, it doesn’t look good. The Green party in England, offering some ecosocialist type polices may win one or two more seats in Parliament, in a hung Parliament, which is surely the best Labour can hope for, which could possibly yield some useful environmental and social concessions, but that is about all I can see.

It could be that action outside of electoral politics will be much more important than what happens in Parliament, once we get through the pandemic. The momentum of the climate strikes and Extinction Rebellion protests has been lost now with the lock-down - it will need to be ramped up again, if we are get any meaningful action on environmental and social justice.

Posted by Mike Shaughnessy at 06:12