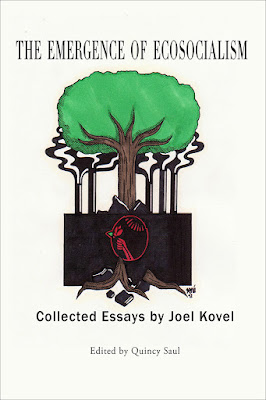 I have recently been reading ‘The Emergence of Ecosocialism,’ a collection of essays written by the now sadly departed Joel Kovel. Edited by Quincy Saul, and published in 2018. The book is reviewed more fully here.

In Kovel’s essay which goes by the same title as this post, first published at Ecosocialist Horizons in 2011, he compares the state of the world with how it was in 1848, when the Communist Manifesto was published, written by Karl Marx and Frederick Engels, which called for “an association in which the free development of each is the condition of the free development of all.”

Kovel acknowledges that the world has changed a great deal since 1848, not least with the ecological crisis we find ourselves in, caused by an economic system which needs ‘productivism’ to grow, in order to increase accumulation. This productivism requires the changing of nature, which can and does have benefits to humanity but also disregards the impact on nature of these changes, which are not good for humanity or nature itself. He writes:

Our generation has inherited a world both transformed and deformed, to a degree that raises the question of whether humanity can continue to produce the means of its own survival… Homo sapiens, a species that has triumphed over nature to build the mighty civilization that now rules over the earth, has also prepared the ground for its own extinction.

Kovel laments this is not generally understood though, with dominant opinion largely addressing the problem with ‘environmentalism’ which separates humanity from nature, seeing it as something around us, rather something we are part of. Environmental problems therefore, are dealt with by pressure for legislation for individual ecological issues, seeking technological fixes, encouraging personal lifestyle changes and buying ‘green’ products.

He says that there is nothing wrong with environmentalism except that it completely ignores the root of the ecological crisis by focusing on the external symptoms rather than the underlying disease. He likens this to treating cancer with aspirin for the pain and baths for the discomfort. This failure to understand the crisis on the deepest level, and so make the necessary changes to our relationship with nature is doomed to fail.

This deeper level, Kovel suggests, is capitalism’s prioritisation of economic expansion, or put another way, growth. This growth is converted into monetary units, also known as accumulation. This occurs by creating commodities, to be sold on the market and the profits are then converted into capital. He quotes Marx writing in Capital – “Accumulate! Accumulate! This is the Moses and the Prophets” of the system.

This leads to the exploitation of finite resources, as well as labour, which destroys ecosystems upon which the system depends. Kovel puts the failure to make this connection largely down to the huge propaganda operation put in place by the forces of capital, that is, capitalists and state governments, to deny its responsibility for the ruination of the planet. Once this realisation dawns, the need for a different economic system becomes obvious.

The test of a post-capitalist society is whether it can move from the generalized production of commodities to the production of flourishing, integral ecosystems. In doing so, socialism will become ecosocialism.

Ecosocialism does not begin with efforts to change the external environment, but with the liberation of human beings, who are able to make the rational choices necessary to restore and preserve the integrity of nature. Kovel believed that ‘freely associated people’ free from the ideology of consumerism, can break loose from the ‘rat-race’ of trying to fill inner emptiness with commodities. Kovel also relates this to the ‘population problem’ suggesting that freely associated people, women in particular, can easily regulate reproduction.

In the interim period ‘Commoning’ should be practised, meaning collectively owned production, as in the ‘commons’ which existed pre-capitalism, and what is left of it is under threat, so should be defended. This can be seen as a prefiguration of ecosocialism, giving a concrete example of an alternative way of living.

Sets forth from multiple points of resistance, notably combining North and South by bringing together a coalition of ecosocialists, radical climate activists and specialists in renewable energy…The best science tells us that this is the only path of survivability. But the best science cannot be implemented within existing capitalism. It will take freely associated labor, motivated by an ecocentric ethic and organised on a vast scale, to effect these changes in terms of resistance to the given carbon system and forcing through its alternative.

The choice is stark, carry on as we are, and risk extinction, or change our pathway to an ecologically rational one. Challenging though it is, the second option is our only hope. Kovel signs off by asking us to:

Imagine the creative possibilities inherent in an ecosocialist energy pathway.

Imagine indeed, and fight for.

Posted by Mike Shaughnessy at 05:53