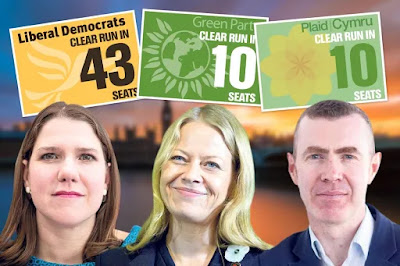 As the full implications of last Thursday’s general election result sinks in, with five more long years of Tory rule, and a hard right Tory government at that, what lessons can be learnt from the election by the Green party?

The Greens did stand in some marginal constituencies where in the end Labour lost out to the Tories, like Kensington and Bury North, where the size of the Tory majority was less than the Green vote. These were outside of the pact with Lib Dems and Plaid Cymru and where Labour had refused to enter into any electoral arrangements, but may well have damaged the Greens reputationally. But it was the pact, with its high profile story at the beginning of the election campaign, that may do more lasting damage.

The electoral pact with the Lib Dems and Plaid Cymru failed to deliver any wins for any of the parties involved, so must be judged a failure all round. But what the pact may have achieved is making Labour’s defeat even heavier than it might otherwise have been. Constituencies like Stroud where the Lib Dems stood down in favour of the Greens, the Green vote was more than the majority that the Tories attained. Likewise, Warrington South, where the Greens stood down in favour of the Lib Dems, the Lib Dem vote was larger than the Tory majority.

Of course, there is no guarantee that had the pact not existed, voters would have backed Labour, but in marginal constituencies like these, which neither the Lib Dems or Greens could have won anyway, the risk was clear. Considering that the pact was organised via the Unite to Remain (UTR) campaign group, and Labour were offering a second referendum on Brexit, this pact made it more likely that we would be leaving the European Union (EU), rather than getting an opportunity to remain. It was counter-productive, to say the least.

Furthermore, the Greens initial objective of making this the ‘climate election’ was undermined and played into the Tory narrative of it being the ‘Brexit election.’ The pact probably didn’t lead to the Greens losing many votes, although perhaps some, as most Green voters are remainers. The modest increase of 1.1% for the Greens in the overall result of the election, as against 2017, appears to show this, but given the way climate change and environmental matters more widely have risen up the political agenda recently, it could well be argued that the Greens should have done much better.

The pact wasn’t universally popular amongst the Green party membership either, with many resigning from the party, and other activists were demotivated at the very beginning of the election campaign. And with all of this for no electoral benefit to the Greens, despite claims by the party’s leadership before the election. It was all wishful thinking.

The Green Party conference motion which allowed the leadership to indulge in electoral pacts, was fairly vague, but did stipulate that the final decision on any pacts would be left to local parties, but this doesn’t appear to have been the case everywhere. Sources from inside one of the local parties involved in the pact has told London Green Left blog that their opinion wasn't sought.

The Brecon and Radnorshire constituency where the byelection in August was a proto-type for the eventual pact, albeit without the local party's consent, when they were not planning to stand anyway. The leadership of the Welsh party knew that they rejected any notion of a pact at the byelection, and that their officers were not in favour of any association with UTR. The pact was announced, before the end of nominations, so their choice then became to either not stand and become part of the pact they hadn't consented to or attempt to stand and severely embarrass the national party.

There was no contact between the local party and the Lib Dems or Plaid Cymru, all of this was done by the national party. Radnorshire Greens were not even aware their constituency was being included in the discussions with other parties. The local party had also taken a democratic vote which rejected entering into any pacts at the general election.

There is the feeling that discussion was stifled and the local party kept in the dark as to what was going on, until it was too late to change the leaderships' decision. This does not sound like leaving the final say on any pacts to local parties, rather the reverse.

The risk for the Green party was that this pact with the neo-liberal Lib Dems, with a leader seemingly keen to launch a nuclear war, would tarnish the Green brand and conversely would allow the Lib Dems to paint themselves as ‘green,’ which they are not. I’ve always been of the opinion that in some places, local circumstances might make standing or not standing Green candidates, a legitimate course of action. But this should be a genuinely local decision, and not be manipulated by the leadership of the national party at all.

We perhaps became too blindsided by the desire to remain in the EU too, and this led to poor judgement at the top of the party. I hope the party can discuss all of this in the coming months so as we don’t take such amateur decisions in the future.

Posted by Mike Shaughnessy at 06:47